How Did I Bring In the New Year?

Posted on January 1, 2014 by TheJessicaness

I started out the day with some blogging and knitting. I’m working on a pair of orange socks with a design on them. Caleb continued to work on the pants he is knitting for me and then gave the dogs some steak – a raw treat. Dan comes over and asks if we would like to go to a family party later – of course, otherwise we had planned to stay at home in our jammies. I didn’t feel like paying $120 cover charge for live music and champagne at midnight in downtown San Diego.

Instead we went to Dan’s at 6:30 pm after I took some selfies as a reminder of what my face looked like at the end of this year. We were gifted with some Butterfinger bars and I asked to borrow two books I saw sitting on the table – Angela’s Ashes, a Pulitzer Prize winner, and Zero: The Biography of a Dangerous Idea. I grabbed my camera, no sweater, and headed to the truck we were going in. Me in the backseat between Dan and Caleb holding the cheap beer and his two sons in the front, Mike and Ritchie with the cookies.

Mike started out like he was in Drivers Ed but soon was taking random turns, tried to take an off-ramp at 60 mph when the speed limit sign said 25 mph, and almost hit a truck parked in the exit lane. We arrived safely and thanked the spirits (that we would soon be drinking) that we would now live until the next year. Inside, the table is covered with cookies and empty liquor bottles. They are being poured into a large storage container with carbonated and colored beverages and cans of lemonade tea.

Ritchie has never tried this concoction before and is quick to get a cup in the mix. Ivan, whose party we are at, has to take away the tub so he can finish adding fresh pineapple, cantaloupe, oranges, and lemons. We wait for the ice, but can only wait so long. We refill our cups and make our way to the snack table that is now filled with burnt empanadas, mini crescent dogs, mini pizza bagels – all things I won’t eat, and cheese sticks and Chex party mix – that I do eat and share platefuls with Caleb and Ritchie.

Selfie of the Year!

There’s a large fire in the pit in the backyard thanks to Caleb. As more people show up we will move our chairs closer to the heat. This will inspire some people to make s’mores and others to go inside the warmth of the house and take shots of fireball and buttery nipples. While the kids were outside beating the crap out of a piñata some of the adults were inside laughing, drinking, and kissing. Back outside I will make sure Caleb is not playing with the fire too much as the hostess is worried that he will burn all the hair on his arms and face. Then I will put a piñata hat on him that doesn’t last long with the staples poking him.

The kids had been inside playing video games but had made their way back to the trampoline where I decided to go. I gave my camera to Caleb, took off my boots, and Mike unzipped the protective fence so I could climb in. The kids had a blast being bounced around by me, but I soon realized I had more alcohol in me than my brain was willing to recognize – thank goodness for sugar and fried foods. I climbed out before retasting anything and joined the mellow drunks by the fire before making my way to the Green Machine – a tricycle with rear steering. 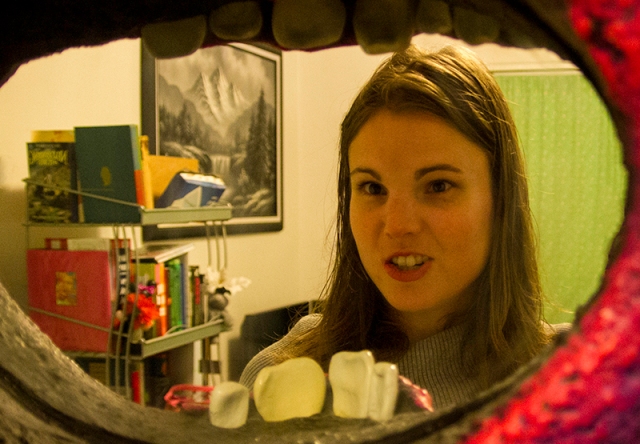 through the mouth of last year

Later the space in front of the food would be turned into the singles’ dance floor while the rest of us sat around the fire making adult jokes and crude remarks and alcohol related statements. When we got the five-minute warning I was surprised to see that kids were still running around. I don’t remember making it that long when I was their age but they might have cheated by taking a nap earlier – I never did. Midnight seemed to last only a second. There were no fireworks, ball drops, or explosions of any kind.

After the couples got their kiss out of the way the hugs began to go around. It reminded me of church as a child when we were told to hug our neighbor or the people sharing our pew – a way to come together and make it easier to share confessions. It felt great to be surrounded by friends, some that consider us family, and to be so happy – even those that weren’t drinking and had kids wearing them out. Then the brut champagne was flowing forth into any ready glass. I didn’t like the taste and neither did everyone else I shared my glass with, but we had fun thinking it gross together.

Please remove the tab before use.

I made my way to the bathroom and Ritchie was in there with the door open. I guess he couldn’t decide if he had to pee or not, but I wasn’t about to go with him in there, door open or not, so we just hung out until we were joined by Caleb and two young men aged 18 and 22. We were laughing so hard when Dan walked up wondering if this was how the parties of the new year were going to be held from now on. Then I remembered that I had to pee, so I made my way to the walk-in closet with toilet/sink and shelf space attachment.

The party started to lose momentum, so we took some more pictures and left at 1:00 am after others that had already gone. Dan would drive us home with Mike in the front seat. I was stuck between Caleb and Ritchie with each of them holding one of my hands. When we got home we were offered to come inside and kill zombies but I wanted to get to sleep to make use of the first day of the year. I had to go back across the street to get my phone out of the backseat. I had brought it to call my mom and had forgotten to during all the fun, but her phone wasn’t working last night. 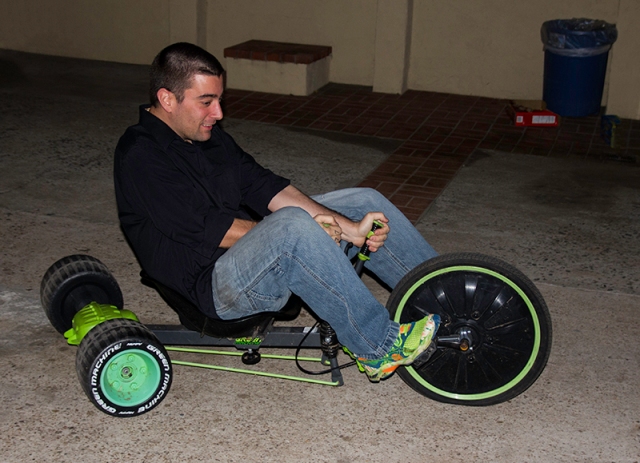 Caleb on the Green Machine

The Morning After: We woke up late. We rode our bikes around Otay Valley by a lake, a nursery, a scarecrow, and spray painted bridge supports. We went to the store and bought mangoes 4-for-$1 and some oats and sunflower seeds to make waffles inspired by Sherri. Caleb tried just stirring the ingredients first and found it better to blend them into a batter. I added peanut butter, homemade apple butter (thanks to Terri), agave syrup, and fresh-cut mangoes on to the one I had.

It was smaller than Caleb usually makes them but more filling. We agree that their name should be changed to 12-hour Waffles because that’s how long they live in your stomach – and I’m not complaining. They are healthy and delicious and I see more of them in my future. After brunch Dan came over to gift me a pair of Tony Lama cowboy boots that are about half a size too big – nothing some thick socks and short walks can’t fix. I took them around the block with the dogs and can’t remember why I stopped wearing boots.

a fire into the future

As we walked we saw our neighbors cleaning and exercising their resolutions. I read a study that said of the 49% of people who make resolutions 75% of them will make it past the first two weeks. I wish them luck in all their quitting and falling and losing and spending. Back home Caleb made potato salad while I caught up with my mom. We hadn’t talked in five weeks so a 98 minute conversation was in order. Off the phone with her and onto blogging I deleted, and reformatted, my SD card with pictures on it before downloading them onto my computer. Happy New Years to you all!

4 Responses to How Did I Bring In the New Year?