Posted on January 15, 2019 by TheJessicaness

I had a doctor’s appointment Wednesday afternoon that kept me from heading to Dad’s sooner. Don’t worry, I’m ok, but I wasn’t even seen after waiting 75 minutes, so I left. I began to pack and slowly debate what I would need if I decided to go to Phoenix on Thursday morning. I weighed the emotions and memories of prior visits against what the future held in love and educational opportunities.

I took long enough to leave San Diego that Dad called to check on my decision. I left the ACE manual and practice yarn, the five-year-old laptop and bright yellow boots. I grabbed the dog and got on the highway. This wasn’t my favorite drive east as I see the damage my species is doing to the environment, but I stuck through the sad cows, the empty land and full roads (obviously my car only adding to the issues) and arrived in time to pick up Caroline from her fourth day at her new job.

We stopped at Lou Malnati’s for dinner and took the outdoor option — heat on my left and a cool breeze on my right with no sweater on. Caroline and I split a thin-crust deep-dish that neither of us finished. I got to reading Arbitrary Stupid Goal, the yellow book with a little pink cover, by Tamara Shopsin and learned about her family friend Willy. More importantly, she told me to dangle the carrot just far enough ahead to keep going forward and allow myself to share the joy I find along the way.

I would finish this memoir, reviewed on NPR, reading at night before bed as while in transit, with Caroline, she read A Distant Mirror: The Calamitous 14th Century, the part about the chaos that was the Black Death, that with the help of the panicked population helped to kill a third of Eurasia or an estimated 25 million people. I only heard about five percent of the book, and though history repeats itself, it’s definitely worth the read.

Dad with his laptop, me with a book, and both of us with a coffee had our props set about on the table while we would spend hours each day in conversation — from silly to sweet and subliminal to savvy — and always satisfactory. Brinn joined us for lunch at Chengdu Delight, a new experience for him, and a chance for me to see Dad’s mentoring from another perspective — agreeing with the self-improvements and book/song/documentary recommendations but accepting the fraction-of-a-moment decisions that have life-altering implications in the other direction.

The three of us (Dad, Caroline, and I) would spend part of the weekend immersed in the fascinating, but speculated history of the Teotihuacan and the exhibit at the Phoenix Art Museum that shares some recent finds of the last decade from 2,000 years ago. We learned what it took in the two-and-a-half years behind the scenes, from conception to display, from tiny support structures to lifting over 4,000 pounds safely (for the art and movers) after ensuring the museum floor can handle the load.

Doug, a preparator (one who helps build and arrange displays), was our guide for the members-only event on Friday night and we were lucky to meet Mark, standing security by the door, on our way out. Mark is only 21 but has the knowledge gained from another decade of life already which he shares a bit about working in different countries and learning about their cultures before suggesting a book, from his collection, and then saying goodnight.

We walk into the house and I find an empty bottle of lens cleaner on the floor with no lid because Sparky has taken it out of the bag and was chewing on it in his bed. He seems to be ok and had spilled some water and the laundry basket with no other accidents in our absence. It wasn’t until midnight that the Mogwai (the gremlin, not the Scottish post-rock band) turned into a rumba (synonym for “party” in northern Cuba) on legs, ensuring his people were waking every hour.

Saturday’s breakfast was special, not just because Caroline tried a new Mediterranean-inspired dish at First Watch and shared her bread with me, and not because I paid for it as a gift, but because this couple that I’m dining with has made it happily to their 25th wedding anniversary and still stare googly-eyed (the amorously adoring and dorky expression) at each other in anticipation of the next quarter century of their lives that they get to spend together sharing foods, moods, and views.

We went back to the museum Saturday afternoon for another perspective of the Teotihuacan: City of Water, City of Fire exhibit, gaining a limited viewpoint from the docent’s tour. We had more questions for Mark, a very smart and inspiring individual to meet, who had been standing in the back. Caroline and I checked out the ultra-contemporary fashion in a gallery upstairs that has layers of fabric piled on mannequins with looks from the runway to the streets with a touch of Japanese overly pink to Arizona garden variety.

Going down the stairs I noticed a man on the wall in a swimsuit. He’s not physically hanging there, but his friend Ragnar Kjartansson from Iceland had painted him 144 times in six months going for simplicity and repetition. This is also the goal in his nine-screen video installation of The Visitors as each screen shows a musician singing in a different room of a farmhouse in New York for the hour-long piece.

Lunch at Joyride Taco House has flavorful food and a superficial crowd. Dinner, hours later and after the sun has long gone, would be much more inducive to relaxing in the atmosphere and delighting in the buoyant joy of our waitress Cali who made a better impression on me than the vegetables; though I wasn’t given a cake-like slice of salad with a chocolate frosting amount of finely ground pepper like Dad who ensured her and the manager of Claim Jumper that he felt the same way about her customer service.

We drove to the Heard Museum for the rare opportunity to see the Yua: Henri Matisse and the Inner Arctic Spirit exhibit — masks and art from the Yup’ik tribe from western Alaska and the paintings from the French artist — at the only venue where this collection will be together. This isn’t the first time the Heard is able to host a unique exhibit, getting to be the only stop in North America to present the Frida Kahlo and Diego Rivera collection during the summer of 2017, that I saw in May, while on a world tour.

Matisse was inspired by his son-in-law’s mask collection and dedicated enough to his passion that even while bedridden he came up with a new method to continue drawing and found a muse in his night nurse who would become a great influence. This is the first time some of his pieces have been shown in the US and is a past due reunion for some of the masks that have been separated for over a century as some are destroyed by fire or left to rot after they have served their purpose in the Yup’ik dances.

I’ve been to less than 1/100,000th of Alaska and 1/1,000,000th of Canada so I am definitely no expert but I can appreciate the perspective this gives me when I wonder how the heck am I ever going to see it all — I’m not, and most people aren’t going to find themselves in the outer reaches of our civilizations when given the opportunity to explore this great planet. Thank you to all the people who made this peek into another culture possible and who inspire me to join all museum notifications within a ten-hour drive radius so I can gain a better interpretation and respect for the world around me.

I brought up the size of the northern tundra to introduce how I felt when looking at the tools and art of those regions adorned with the local fauna of walrus, orca, seal, and albatross among many other species of birds and fish more common in this cold climate culture. I’m used to just seeing women and children in parkas rimmed with snow around their faces to represent such a varied landscape and getting to see them wearing masks of the spirits of the sun, moon, and wind surrounded by swan feathers was a treat. My favorite is the symbiotic pair of wolf and caribou, each mask only a half of each to form one face.

Anyway, the Sonwai: The Jewelry of Verma Nequatewa exhibit in another room didn’t hold Caroline and I’s attention for as long, but we took a look around at the Hopi’s shiny 30-year collection of bracelets and bolo ties filled with coral, turquoise, sugilite, opal, abalone, and 18k gold, extending any of these items out of my price range. Lunch is at Otro Cafe with a roasted corn cob appetizer and a cotija flapjack dessert to share. It’s been a while since I’ve come up with a combination of my own. I need to get back to experimenting with ingredients in the kitchen.

Sparky has kept us up again and Caroline will skip her morning run while Dad and I go for lunch early at Gil’s on Monday. We thought the food would keep us awake, but the guacamole and waitress (accosted for not looking her age, but complimented on her ability to reset her life) would bring a nap for Dad and an 80-minute slumber for me after realizing I was still on the same page of a book for half an hour. 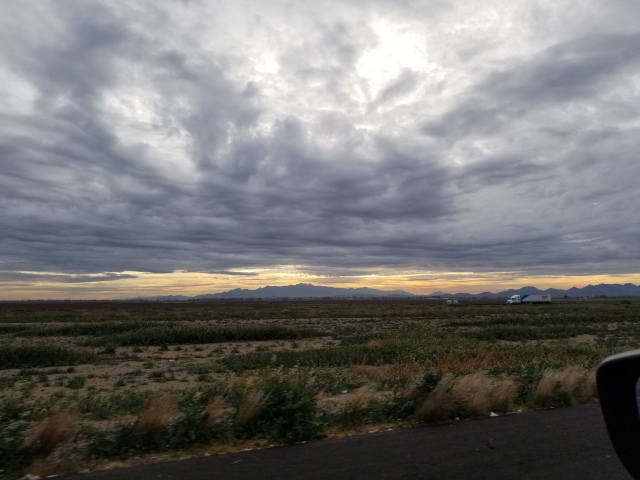 I sat across from Dad in the coffee shop, chilly and half asleep, wondering why my cold brew was half ice. We wanted to introduce Caroline to the lunch waitress, her second day on the job, but she had already gone home. This didn’t stop us from going back for dinner and lingering in conversation before getting back to the house where I could have another long phone call with Caleb while getting some steps (this time not in the rain).

I grabbed my clothes and the four books I will borrow before coming back upstairs for coffee and Sparky on Tuesday morning. I will leave a day early grateful for the time together and to show that appreciation by letting them sleep tonight, sans Sparky, as they look forward to another 25 years of marriage. More coffee for me, gas for the car, and red cabbage fields for the view looking a deep purplish black in the rain and fog which adds to the beauty of the drive to San Diego.