An Adventure Is a Wish Your Feet Take

Posted on December 6, 2014 by TheJessicaness

We decided to sleep in, hitting snooze on my alarm, and going back to sleep for thirty minutes. We were ready to go by 7 am. I didn’t feel like a shower, and even put on the same skirt, and skipped the steam room. Caleb bathed and we packed the new purchases into our bags before driving the car downstairs, and turning in the room key.

The attendant asked if we were settled on breakfast (checking out before the buffet opens) and while Caleb waited on them to check the room and get the receipt (another one), I went upstairs to get a view from the pool – the one I wanted since we arrived.

We drove to Heritage Village, that opens at 8:30a, and got there at 8am. We walked along the water taking in the architecture, flowers, camels, clouds, shadows, cats, people, and all the details from the sea-life on the water’s edge to the different cuts of wood on the balconies, doors, and dhows that make this part of the city such a great morning destination. We find a sign that says doors don’t open until 4:30p on Saturday’s. I guess we will have to enjoy the wonders of an afternoon here on another visit.

We drove to Century Village (a gathering of eateries) for two coffees, a croissant, a muffin, and a lemon water at Costa with a kids’ tennis team – so we sat outside to lessen the noise and Caleb eavesdropped on the conversation at the next table about how Dubai used to be. I wonder how much cheaper a quick breakfast was – as today’s would cost us $25.

We made it to Sharjah National Park at 10 am and though our tickets said entry was 2 Dhs we were charged 5 Dhs each – what’s another 80 cents when we’re helping preserve a green oasis among the desert and the city to give locals and tourists a place to relax and play. We passed the kitty train driver for the pink and white ride headed to nap town – as that’s where him and his assistant already were.

We walked down the long tunnel of pillars and flowers with a wooden trellis overhead and a metal fencing over that so that the shadows could fall, but not the plants causing them. I admired the lines, and the bright pinks and yellows… and chipmunk! I’ve adapted to the lack of animals, certain foods and traffic laws, so I was excited to see something scurrying after having gone months without – that, or Sparky has me trained well.

We go over the hill, enjoy the view, and down to the bike rental shop. The employee is lounged in the grass and gives us a tandem – thirty minutes for 30 dirham. It’s a good thing we didn’t rent for longer as the bikes are only allowed on this small portion of the park that’s filled with trees, sprinklers, sunshine, a closed tunnel; and birds with bright blue, indigo, and turquoise feathers seen in flight – known as an Indian roller.

We walked by the teacups (Caleb’s favorite carnival ride) among others that had cats hidden in them, and a replica-looking Ladies Mosque, and a large set of swings – they’ve got the right idea in the Middle East – not skimping on things wanted or needed. We walked between wall and trees on one side and grass on the other looking at flower bushes and trying to capture a picture of the elusive Indian roller – so fast, so beautiful, and perched so high.

After all this beauty came the smelliest and brownest toilet I’ve been in, and used, since my arrival in the Gulf.

Caleb said we were headed to a surprise and then told me to take a quick right off the highway. The Sharjah Car Club & Museum… not my idea, but it would be a treat for him that he noticed on the map in time. I would have to wait for mine. There were enough cars in the lot to satisfy my curiosity, but we went inside and spent an hour looking at 72 years worth of fancy older versions of cars – some I like better than their modern ones. We put together a large magnetic puzzle and then got our picture taken in a Corvair.

cruising in a Corvair

Caleb wandered around back to find the stash of other cars left in the sun covered in dust waiting for the day they can shine again. I went to our car to eat. We had leftover rice and I used a drink lid as a feeding scoop which turned out to be more fun than it was messy.

My surprise would be the Eye of the Emirates, a Ferris Wheel and the only ride Caleb likes at carnivals. It’s five dirham to ride and we got to rock at the top while people boarded. I think the wheel is more picturesque than the view it offers of the skyscrapers/water on one side and skyscrapers/dirt on the other, but it’s nice and I want to come back at night. 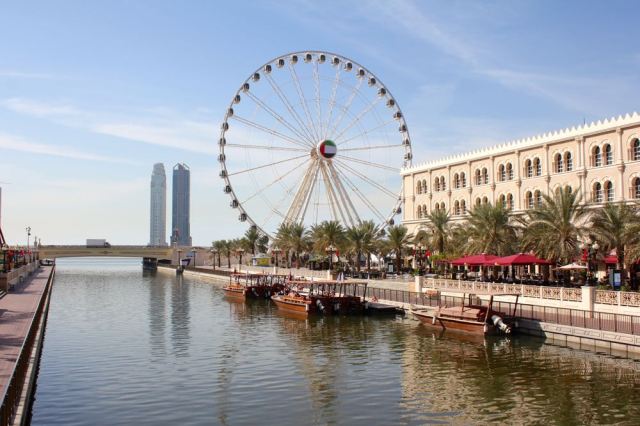 Eye of the Emirates

We went to O’ My Buns (Idiocracy reference?) for drinks and a bun. The guy had trouble understanding our order even after he wrote it down, he didn’t serve us the carrot juice I wanted, and didn’t have change or a toilet, but the bun was new and the green tea latte and saffron tea worth waiting for while watching a toddler interact with his parents and make faces at me. These are the joys of traveling and what make my stories worth telling.

Next was the Heart of Sharjah. Caleb wanted historical looking and museums and this place is full of both. We already want to come back to the UAE. We thought the place might be closed and deserted, but when we saw the bus load of tourists we knew we were in the right place. We had the Heritage Museum to ourselves for five dirham each – full of clothing, pearls, pottery, and a courtyard that leads up to a roof with a view. 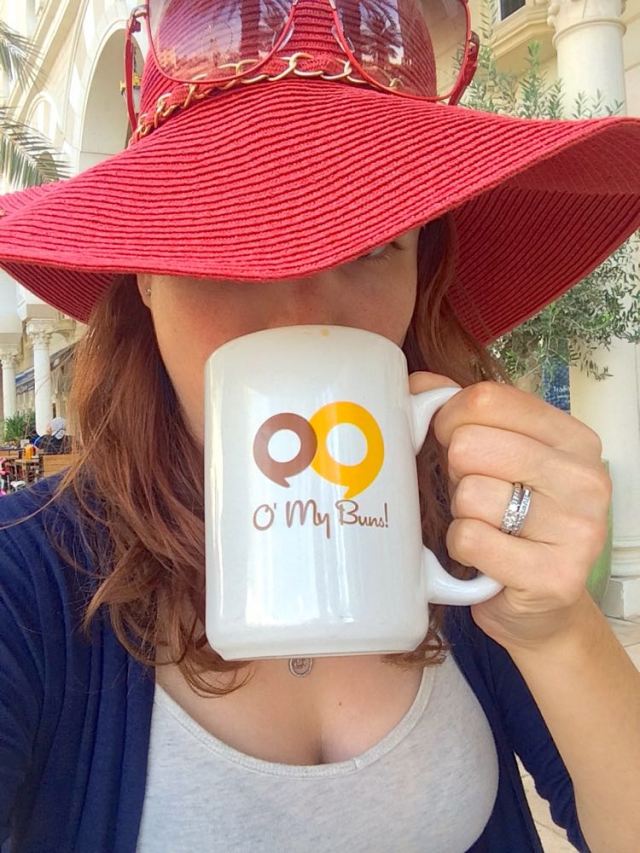 sippin on bun and juice

Soon we were in the Asra Souq looking at old Emirati coins with different designs on the back commemorating events. We walk along the harbor, boats on this side with sleeping crew and ships on the other, and on the rolling sidewalk that seems as if they laid bricks on the terrain without any forethought. They did a good job though and I appreciate the texture it gives to the area and its relative smoothness that could be appreciated on a bike compared to some of the cracked sidewalks I’ve been on in California.

With two hours before going back to Bahrain we drive to Irish Village. I stop for petrol where they have nine-piece firewood stacks and three-pack tissue sets, both in bulk for those impulse buyers. I take a u-turn instead of a left, but it’s only a ten minute delay. We arrive and parking is still free. We’ve gotten lucky with that because of the holiday. I order a Bailey’s and mint shot and a Wagner’s and Guinness drink and we go outside to watch the ducks and the three little girls in pink dresses. Caleb is the one to notice all the people with luggage (the ones that took cabs and will be leaving here less than able to drive).

We dropped the car off at National with no issue and were climbing in the back of a partially pink cab at 5:30. I should’ve done a better job of exchanging bills for change, they charge 25 just to get in the car. We had to wait on her to get change while the guy behind us honked at her blocking traffic. We got through passports and security within 30 minutes and I got a laugh out of the English guy, drunk from Irish Village, who thought I was Russian or Canadian and go to Aspen every year to ski.

We found a seat and then a guy moved for us so I could plug my phone in and try to update it. I didn’t think I would need a coffee, but I started to feel sleepy, so I went to the Dunkin Donuts stand for two lattes with a shot of espresso in each. Check out was harder than watching the drunk guys order a box of donuts. We saw the line form for Bahrain and then saw Natalie, our neighbor, when Caleb got up to throw away his cup. She was trying to get her parachute (she’s a serial skydiver) on the plane and they made her check it.

Scottish Courage – for all at Irish Village

She had row 7 (lucky enough to pick her seat) and we had row 28, so we loaded from the rear of the plane. I don’t know why more flights don’t do this. She was able to jump six times in two days and had an absolute blast. She wanted to hear all about our trip. I went to her seat and got into the one in front of her to take a selfie – like my dad running into a friend on a plane, but not as photogenic.

We lifted off at 8p and landed at 8p. It took us 45 minutes to get through passports, have Natalie offer us a ride, pay for long-term parking, and be on the road home. We arrived to happy dogs – happy we were home to walk them and feed them twice. I’m happy there’s not a bag of pee on the table. My throat started hurting on the plane and I thought it was the perfume. Now my nose is running too. I hope it’s just trying to clean out the mess and that if I am getting sick that I’m better before our next trip – that I still have to plan for.

1 Response to An Adventure Is a Wish Your Feet Take