When I See a Sun Rise

Posted on December 5, 2014 by TheJessicaness 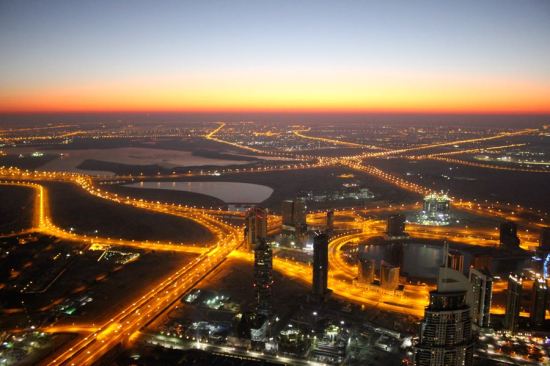 This morning came too early, but I wasn’t going to let being tired get in the way of our vacation. I showered and heard Caleb moving around when I opened the door to let the steam out. We left the room at 5:30 with a 20 minute ETA on the map. We got to the Dubai Mall with no problems and definitely no traffic, but had a hard time navigating the large parking area. We asked two attendants for directions and then Caleb pointed left.

We went inside and there are guys spaced throughout to help point tired people in the right direction. At one point we went up the wrong escalator and had a couple follow us as they had tried using the elevator without luck. You park in cinema parking, P2, M and then walk all the way to the end, with signs guiding you, and stop when you reach the shiny counter with the hard to read sign that says At The Top. 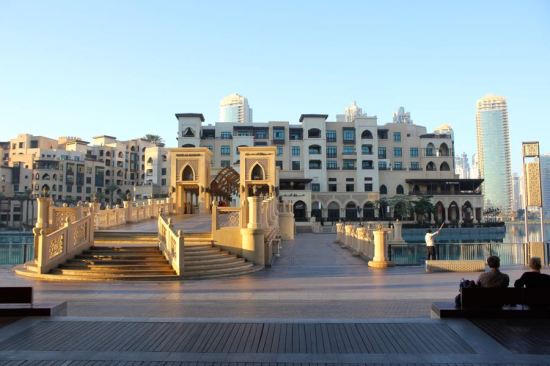 We were on our way up at 6:03 and I wanted to come back for the sunset as our ticket tells us it can be seen from the bottom of the building and then again from the top – two sunsets in one day! There is a long moving walkway full of screens and mirrors with the history and extravagance of this place. I didn’t realize the work and brain power that went into such a structure – and I thought I had been to some tall buildings. This thing is art, science, and technology. There are more screens, hallways, and steps leading to the elevator with more screens and lights that will take us to the top.

We are led out on to a balcony with a hole between glass and concrete at our feet and another one between glass panels so we can feel the wind and the height better – perfect for acrophobics and those willing to put their cameras out there unknowingly. This also allowed better pictures without a reflection in the glass, but I didn’t see a net for dropped items, but I suppose that’s what the fountain is for below. 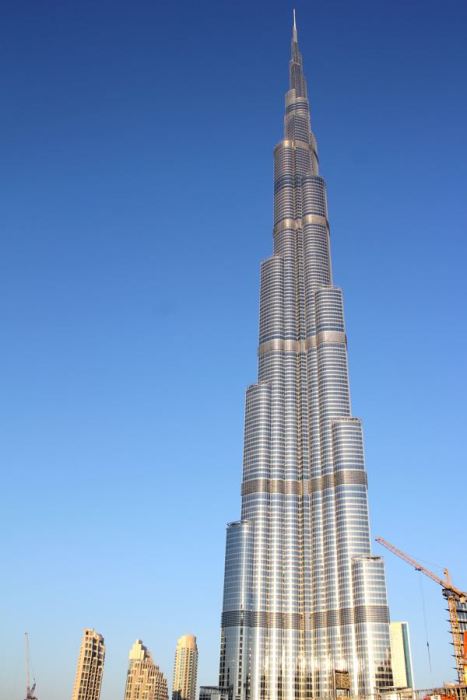 We are impressed with the view in the dark at 6:14 and it continues to get better as the crowd begins to thicken to watch the city come alive. We let some people enjoy our viewing spot for a moment, but were sure to claim it for the money shot – the reason we paid to come at this hour. The city becomes clearer for a moment before the pre-sunset fog blankets the view, only to be warmed away at 6:52 when the sun begins to peek through the clouds that have delayed the gratification of the crowd.

This is all I had planned for today, so I feel accomplished – it’s the little things. After getting my necessary retina burning done for the day, I can make my way through the crowd to photograph them taking selfies and take in the rest of the view that this height has to offer – Burj Al Arab standing alone with Jumeirah and possibly Jebel Ali in the distance. In the gift shop, we bypass the 400 dirham golden plate, the snow globes, pencils, keychains, mugs, and 120 dirham shirts. What we want isn’t for sale – the viewing lens with day, night, live, and historic options – and I’m sure it wouldn’t work the same in our living room. 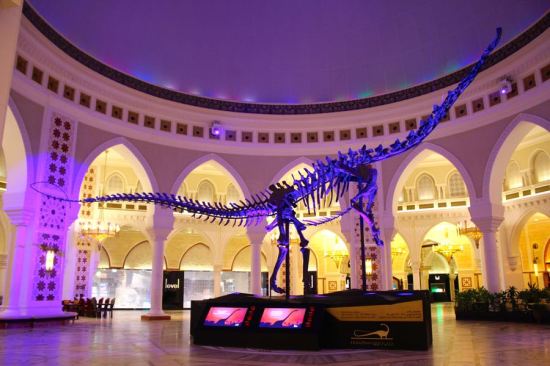 We take the lift (elevator) down at 7:13 and wave goodbye to the sun – physically and metaphorically as we make our way down another hallway informing us of all the wealthy people who were in charge of the workers safety and accounting for the millions of man hours it took just to put in all the windows when the weather would allow. Another walkway with more screens will deliver us out of Burj Khalifa in search of coffee inside a very large mall in the Middle East where nothing opens till late.

The architecture is beautiful, inside and out, and though I’m concerned with capturing the light in my lens I also have a strong desire to give my body energy. The only places conveniently open by 8:15 (when I felt like passing out after walking around for an hour) were Caribou Coffee and Tim Horton’s (an American and Canadian company) – where we got drinks, a cranberry-sesame muffin, and a cinnamon raisin bagel with cream cheese. 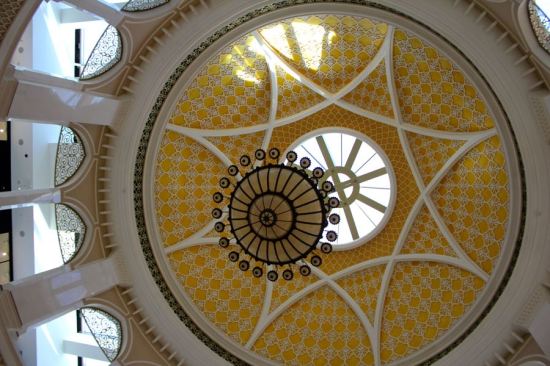 During that hour we saw a window display that smokes, moves, and plays music – it was fantastic – and the best one in the mall out of the others we would see. We walked by the second largest indoor aquarium, able to hold ten million liters, with the world’s largest acrylic panel. And we discovered the Dubai Dino, a Diplodocus longus that is over 150 million years old that made its way to the Middle East from Dana Quarry, Wyoming. The body is 80 feet long and 25 ft high, and has 90% of its skeleton, the most intact of its kind, which at first appears headless.

After breakfast, we explored the many fancy shoe displays and happened upon the hockey rink – in mid-game, complete with referees, seating for 400, and a VIP section. Though I believe sitting in the white leather chairs just on the other side of the glass would be more thrilling and comfy. We passed the Souk inside the mall which compares to the Souk Al Bahar (meaning market of the sailor) in size, outside the mall with over a hundred shops – one of them being Icon Coffee Couture that serves kopi luwak from 7 to 11 in the morning, but that just happened to be closed today.

We should’ve gone to the Underwater Zoo when we had the chance, but we either left something to come back for, or the opportunity to see one when visiting another country. It took us a while to find The Waterfall, an indoor fountain that spans all four levels of the mall adorned with fibreglass divers, not just one of the other two ordinary fountains inside, let alone the outdoor one that’s supposed to be 25% larger than the one in Las Vegas that sprays water and spreads joy in the evenings.

We passed KidZania, with the ticket booth set up in the fashion of an airport, on our way to SEGA Republic, so that Caleb could ride his first indoor roller coaster. We put all our stuff in a locker (so no video footage) before climbing on with two kids. Under my screams, Caleb could hear one of them joining in to add to the noise of the experience. They got off playing it cool because they get to do this every weekend. I’m grateful my first ride was laughing in fear as Priya made sure Dana Mall heard the terror in her voice. 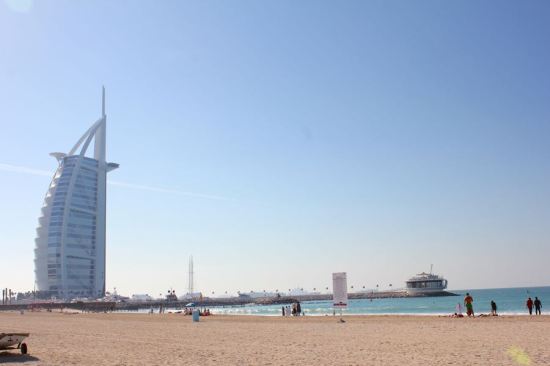 beach next to Burj Al Arab

We happened into a Tempurpedic Mattress store to lay down on a $5,000 Cloud. I would’ve given the ok to buy, but ours at home has only reached its half-life, and I’d hate to think it was ok to throw me out at 50 just because something comfier has been found looking soft and unused under incandescent lights. The sales associate urged me to take off my shoes and grab a pillow. I don’t think she understood our need for coffee, though I could’ve crossed off a nap on a public bed while on vacation off my bucket list.

Before I could earn my coffee, I had to spend 40 minutes in the dressing room trying on things with and without sleeves. Caleb was smiling as he imagined me on the next billboard ad for barely there clothes. An agreement was made, some things were bought, and a yummy chocolate-swirled, whipped-cream topped beverage was given to me with a straw. I appreciate the lid for added content, but always take it off to make a mess first. 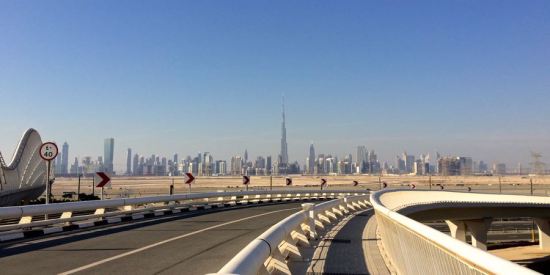 We left the mall at 2pm and went to the public beach next to Burj Al Arab. There was more skin here, on the sand in the Middle East, than food served at an Indian festival or at Grandma’s during the holidays. I didn’t bring my itsy-bitsy teenie-weenie pink polka-dot bikini, but I brought an appetite to fill it, so we thought we’d go to Heritage Village to find a large serving of traditional Emirati food.

We got detoured by Qube’s Inferno Burger that needs a waiver and has a thirty minute eat and it’s free time limit. It’s located 20 minutes out-of-town at the Meydan Golf Course, but when we get there at 3:30, after reaching a dead-end and finding another route, we find out that they stopped selling it months ago without telling anyone because a customer fainted or something – isn’t that in the fine print, and another reason to add your name to the list of attempts. 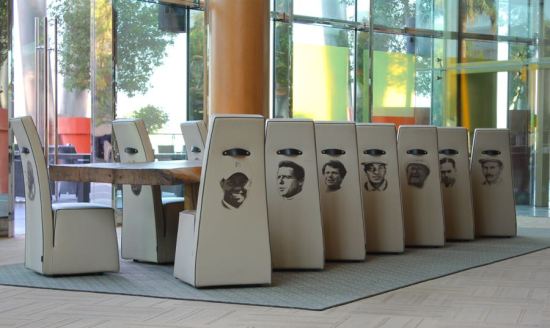 to art, or to eat, that is the question – at Qube’s

We order a Heineken and some fries while playing a game of pool – no point in coming out here for nothing. The place looks like a nice hang out, but besides the old guy in the corner, we’re the only customers in the place, but that’s because we didn’t look on the green for Tiger Woods practicing his swing.

It’s a good thing we got something to eat because Kate awakens from her weekend shenanigans to the picture of the flip-flops she was looking for that I sent her hours ago. She asks for two pairs of Havaianas, so we return to Dubai Mall at 4:00 to spend 240 dirham on shoes. We get to watch the sunset on the way to dinner at Hot & Spicy restaurant. We get there at 5:45, order rice with peppers, a roll (chicken shawarma in a paratha), and Marsala fries with three dips. We didn’t have to sign a waiver, but we got to sit outside, enjoy the food, and people watch. 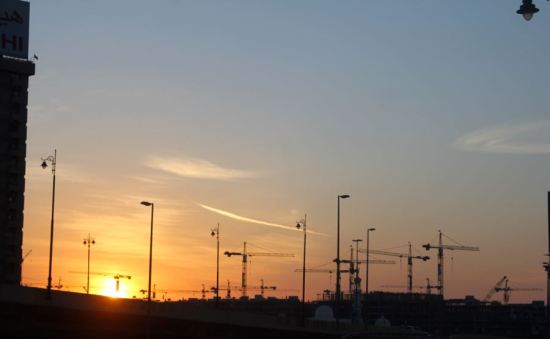 to work, or to fly, that is the question – at construction site

I tried going to the petrol station before dinner, but missed the curb-less spot along the road. I u-turned to try again only to be faced with a cliff and rocks leading into a dirt lot. I kept driving and took the exit from the highway to wait in line to pay our 53 dirham to fill the car with Super. This will give us the gas needed to get back to the room, across towns, and run around tomorrow. I step on the gas and make the car beep once before keeping it at 100 kph, the speed limit.

We get to the room at 7pm and are excited for sleep, but my writing keeps both of us awake and we remember the gym/sauna/pool, and Caleb brought shorts this time, so we go upstairs to find out the pool closed 45 minutes ago (at 7p) and the gym closes in 15 minutes (at 8p) and that my computer is still on Bahrain time (7p). It’s now 8pm and we plan on sleeping in tomorrow, eating or skipping breakfast, and maybe going to the sauna.

2 Responses to When I See a Sun Rise