Posted on July 8, 2014 by TheJessicaness

Caleb wakes me at 5am to take him to work. I bring paperwork that I won’t need until later, if I even decide to come back to base today. I get to the gym at 5:30am and though it’s busy a treadmill is open. I run a mile and a half today in 15:30 – not bad for being on leave for so long. I try some of the other equipment – using more weights on some and less on others. I feel like such a noob in here next to all these other girls that are in a routine with their tone muscles, flexible legs, strong arms, and sweaty faces.

I go back to the locker room and someone comes out of the sauna, so I go in. There is a girl on the floor working out which makes me feel that I must do the same. This only shortens the time I’m in there as 40 celsius is hot on my dry throat. The shower this morning has no problem finding the cold water, and luckily there are two drains per shower – one to catch immediate water and the other to catch spray and runoff where you can dry off before opening the curtain.

I get back to the house at 7am and the dogs aren’t ready to go out yet, so I go to breakfast. One guy comes in and pours two cups of coffee. Soon he is joined by another guy and they are speaking Swedish perhaps as another four come in. The room is getting smaller as I finish my breakfast and grab an egg for the dogs. One guy orders an omelet with bacon – ahh, the freedoms of Bahrain.

Angel and Nick playing hide and seek with Jay

I walk the dogs and then take the bathroom trash bag out to pick up after them. It was ok when the grass was dry and their poo baked from the sun. Now, a water truck comes by making the grass moist and the poo melted in. I pick up what I can and then grab trash along the way. It’s a larger bag so I pick up some of the bottles from the dirt lot and the hotel manager tells me the municipality will come. I smile as I wonder how often they come. The glass bottles (that break and cause a walking hazard for my dogs) and the half full water bottles have been there since we moved in. I’m ok with accepting the culture and watching them throw trash out their windows, but I’m also ok with picking up after them.

Amy is here at 8:30 to pick me up with her son Nick and his friend Jay. We drive to base to get some cash and then drive to the Manama Souq. We would’ve parked across the street but the main lot was full and they had yet to open the other one, so we drove down the street, past Golden City, and parked in the dirt lot. There we met with Reika, Chrissy and her daughter Angel, Yanell and her son Lucas, and then Jay’s mom met us in the tailor/fabric shop.

I went with Amy outside to the perfume, watch, and sunglass hut next door and watched her haggle for perfume for her, cologne for the husband, and two pairs of sunglasses for her son – knock-off Oakley’s so he doesn’t wear his nice ones to work. Inside someone was getting fitted while the kids played hide-and-seek upstairs. From there, most of us went to base. Nick had basketball practice and the rest of us were ready for a drink.

me and Lucas hanging out

I rode with Reika and we met Chrissy at the smoothie stand. I got a strawberry, pineapple, cucumber, mango smoothie – delicious and refreshing. Then we went to Smash Hit Subs and Pizza and two pizzas and some bread sticks were ordered. I had what was left of the hollowed out sticks when Angel was done with them and Amy shared some of her trail mix. I didn’t think I was hungry, but watching others eat, realising that breakfast was a long time ago, and that it is lunch time and the smoothie was more of a hydrator than a filler I didn’t mind snacking.

We hung out and all had something to say, sometimes carrying on multiple conversations at once. Chrissy had to go clean, Reika wanted to take a nap, Amy had another hour to use for studying while waiting on Nick. Reika gave me a ride home and I walked the dogs. As soon as I brought them inside the houseboy was ringing the bell. Good timing. Our floors are starting to resemble more beach than marble. Then I can feed the dogs and find something to do to fill my time between now and when the event starts at the church at 9:30pm.

Facebook got the better of me again, but I enjoy sharing all the good things about Bahrain with people curious enough to ask. I did manage to publish the post that has taken me days to get the pictures loaded – distraction and slow internet haven’t helped either. I started getting restless around 7pm and I think I fed the dogs instead of taking them out. Piggy ate of course, but Sparky didn’t – did I already feed them? 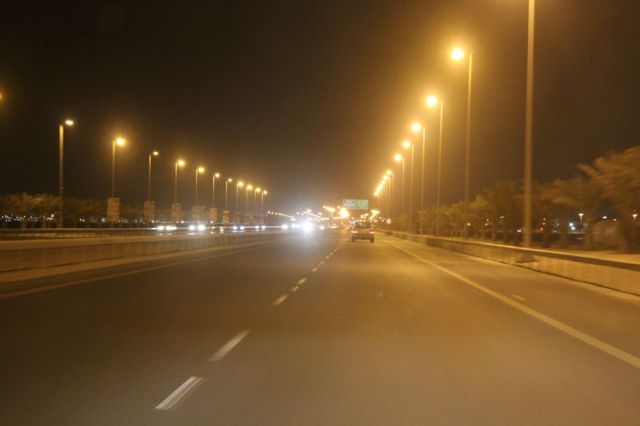 driving towards the church

I looked the place up on Google Maps, but my phone wouldn’t find it. I had no problem with the Waze app and thought I would leave early. There are shops, cemeteries, and gardens nearby the Sacred Heart Church so I would have something to walk around and see. I was good until the last left where I was directed to enter an alley thick enough for a bicycle. I didn’t mind though as this let me go through a street of lights. There was a sports building in all white, another with multi-colors strung up, and so much more.

The shops were coming to life (pun intended) and people were in the street. I was going slow enough to let the brave ones cross. I would obviously stop for them. I wanted badly to just park in the street like the others, but the car may get hit or I might get blocked in – and I’m alone. I looked at all the men walking in groups and the women traveling in pairs covered in burkas. I knew I would draw attention – and I’m not ready for that alone yet.

I drove the same route again before finding a way out. On the street to my hotel there are two boys playing soccer. I stop mid speed hump to let the boy fetch his ball and return to his friend or brother before continuing. Then the night guard helps me park and opens my door before I’m ready. I suppose I shouldn’t be so quick to turn off the car. Or I could lock the doors as they don’t do it automatically like mine after you reach a certain speed.

I love the nightlife here. The temperature cools down, the street lights come on (not always the headlights), and people are everywhere – sitting, walking, shopping – and pausing in their car to listen to the nightly prayer (at least that’s what I did). Greetings are quick inside before the dogs go back to bed – Piggy on my pillow and Sparky on the couch. Another night with Facebook, but I made some new friends and found some artsy fartsy classes I can take on the island. I could probably do a lot of the projects myself, but then I have to supply the materials and have no company during the process.