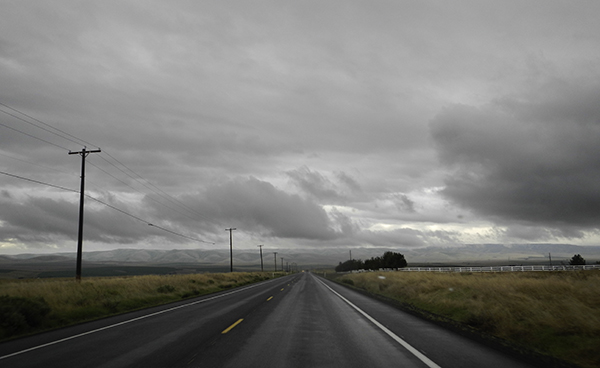 We woke at 5:30 am and it had rained all night. It’s a good thing I suggested we put on the rainfly. We pack up, skip the fifty-cent showers since we’re already wet, and drive to a gas station with hot coffee and cold chocolate. The Whitman Mission National Historic Site in Walla Walla doesn’t open until 8:00 am and we are there at 6:45. It’s still raining too much for my camera and my absorbent yellow coat.

It seems like in only five minutes, but it must have been an hour and a half since we left the park, that we are crossing into Oregon via the 11 south. We are greeted with a rainbow, but the dark clouds continue to hang over the fields and mountains. I start to get a bit drowsy from the gray day so I pull over to a closed campsite at an Oregon state park and we walk around for 20 minutes or so before I resume driving on the 395 south that will take us closer to John Day Fossil Beds National Monument.

Two more turns and we are learning about basalt floods, clouds of death, ignimbrite layers, rings on a petrified tree, about the age of fruits found in the area, and the relationship of mammals to their ancestors and bacteria. The visitor center has ant pupal cases, a rodent brain cast, chewed up skulls of fanged mouse-deer, and the skeleton of a three-toed horse (Miohippus). We take a walk through the Blue Basin via the Island in Time Trail that follows a mostly dried up river bed with green water.

Along the trail we see beautiful multi-colored mountains with a replica of a tortoise-shell, some history about the nimravids (false saber-toothed cats), and get to watch Piggy cross the many expanded metal mesh bridges. I would carry her once or twice to keep her soft paws off the sharp edges. Also displayed is a letter received in 1995 from parents mailing back rocks that their children, ages 6 & 8, had stolen.

On the outside of the park we will see our third shoe tree. There is a chain of shoes so heavy that the lower branch is now on the ground, along with a pile of sneakers. We meet a couple that is on a trip celebrating their 10th anniversary (our 4th was in March) and they are trying a new route. They visited Tillamook with wine, cheese, salmon, and bread, and ate their lunch in a national forest – how romantic.

Caleb next to a giant chair

Our next stop will be in the town of Mitchell at the Redwood Bench & Table Co. where we get to see the tables, chairs, and votive candle holders made of juniper trees by Bruce and sold on his website too at juniperguydotcom. We were at the Sheep Rock Unit earlier and are now visiting the Painted Hills Overlook. There are red and golden striped hills with touches of white between and on top. There are layers of the Clarno formations and Picture Gorge Basalts where Thomas Condon, pioneer minister and amateur scientist, found fossilized leaves in 1865 that would entice him to make many return visits.

It’s more than breezy outside, but that doesn’t keep us from learning more about the forest that lived here 30 million years ago that has been replaced with near-desert today and the adaptations that plants and animals had to make to survive. We read about the oxidized iron, and a mix of oxidized magnesium, metamorphic claystone, and the black marks in the rock that are rich in manganese. Once in Prineville, I notice that we have 11,620 miles on the car. We bought it in mid-February with 49,280 yards on it and we are 1,593 kilometers from home.

us in the Painted Hills

A lot of the gas station attendants aren’t fond of getting their photo taken, so we get one guy to put the pump in our tank and another to take it out – or it’s just the way the rotation works. Either way I would like to get a good picture one day. I think it’s a great way to increase the workforce, especially when they wash your windshield too. From here we will drive to Redmond for dinner.

We choose the parking lot of Firemans Lake City Park as the place to set up our camp stove. We are joined by Mallard ducks, Canadian geese, Brewer’s blackbirds, yellow-headed blackbirds (the bravest), large gray geese, a manky (British term for impure) mallard, some brown finches, and a marmot in the distance that has a close relationship with the shade provided between a tree and a port-o-potty.

We will look for camping in the Willamette and Deschutes National Forests and when we can’t find one we drive on. We might have just set up somewhere but it began to rain, so we drove south of Chemult and get room 8 at the Budget Inn for $43. This will place us under 70 miles from the south entrance, since the north highway and Rim Road are closed during winter, to Crater Lake which is our destination in the morning.