Posted on November 14, 2018 by TheJessicaness

Not every road trip has to be long, exciting, or life-changing. Sometimes you just need to escape the city or your surroundings and give your brain the peace that being behind the wheel brings, especially for those who love being close to someone else.

Each journey has a destination and today’s would be Chengdu Restaurant in Chandler. Dad drove us east to explore; not so much the road we’ve both been on before, multiple times, but to go into the depths of our minds. We made it to Superior where we were able to talk with Kathy again, this time about old buildings and the hidden trail to the old tunnel that we decided against walking along in 55* weather with the wind we’d forgotten about while inside. 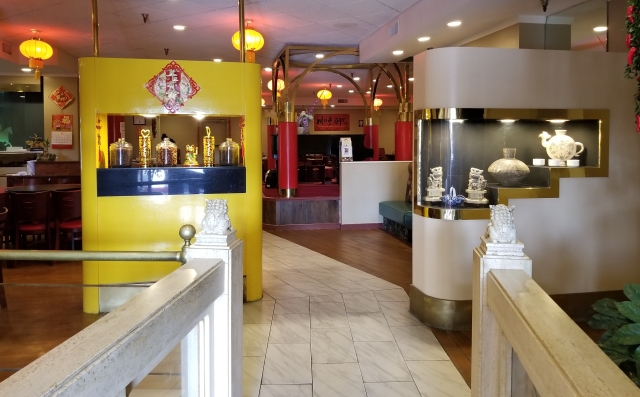 An hour later, and after letting me take a peek at the options before closing the pages, Dad is ordering by the numbers from the not-typical-American menu so that lunch will be a surprise, which I prefer as it alleviates the anxiety of choosing for myself. It wasn’t so much the tofu, gyoza, chicken, or cabbage that was new but the mala sauce (a combination of Sichuan pepper and other spices with oil that causes numbing) that brought the unfamiliar sensation to lunch.

I take a bite and then two wondering if my tongue is going numb. Dad said it would feel like pins and needles, as when an arm or leg falls asleep, once I add water. For me, it’s a snap, crackle, pop which tickles and sets this moment in my memory. A few more bites and another sip of water makes my tongue feel like it’s licking an AA battery except for the feeling rolls over my tongue.

tofu and cabbage with mala

We continue the conversation at home and it’s productive and educational but exhausting. There’s no manual for growing up, which is hard to do; no guidebook with a bullet point list of steps to take, so there’s not a defined way of knowing you’ve made it. We’re in a coffee shop now, a bit of a reprieve from our in-depth discussion that took up most of the daylight hours. Learning about Moshkovitz yeast sending spears into a beetle’s belly sent me on a tangent of self-discovery as I advance to the next stage of life.

Q&A: What do you need to vent about?

These moments aren’t age related or limited to one event – marriage, hiring/firing, death – but come at times when not expected – a book, a bottle, or a boss who doesn’t care about your dreams or bills. I’ve recently had some revelations of my own and am attempting to handle them in a new way. Since I was a child I’ve been told that I’m beautiful, smart, and perfect – and that was the mistake. This isn’t about body acceptance, but about responsibility for my actions or lack thereof.

I thought growing out of my teens was also getting me away from the effects of a sometimes painful childhood and I realized how lucky I was compared to children in this country and families in war-torn areas. I thought I had moved on and forgiven the people who had influenced my youth but people are built slowly and it takes time to create or destroy a personality. On the outside, I had made up excuses to absolve all guilty persons, but those instincts were there on the inside and I lived in a narcissistic bubble of my own happiness, at the cost of that for others. I hurt those closest to me and actually neglected my best interest.

I’m quick to lash out when things don’t go my way, even if that’s not always obvious, it’s hard for me to hide or lie about these issues as my body language tells another story. Mom knew way more about me and life in general than she let on. Dad encouraged my growth from day one – and then he left. I told myself that I was glad one of my parents had moved on to find ultimate happiness; even though it traumatized my early years in ways I couldn’t know and has a bearing on me now but for different reasons.

I’ve learned that good people are always learning and that even the best can make the worst mistakes, but that’s all perception. We as humans do what it takes to self-preserve and as a species are still coming to terms with what it means to deal with the package of another person for five to 50 years as we make drastic changes of our own and continue to live longer; it’s inevitable unless you choose to rot and remain unhappy together.

I tell myself that I don’t want to ask of others what I can’t do, but I’ve demanded that others serve my needs and have been blind to their pain. I want to make amends, but I can’t just apologize for my own guilt. I have to allow those people to know that I’m now aware and willing to change, even if it’s too late for “us” it will continue to be my self-improvement project for the rest of my life.

All any of us want is acceptance and love, to be understood in our many moods, and not to be judged, lied to, deceived, or hurt in any way. Though this is unavoidable, how we cope and grow is relatively up to us to decide how we let people and life events affect us, but we aren’t given the mechanisms of change so we continue down the same self-destructive path we’ve been shown from family and society and that reaffirms our belief that to be wrong and hateful is the right thing to do.

The most powerful thing you can do is to stay true to yourself and follow your heart in an optimistic light through all situations because you can’t change those around you without changing yourself and showing them through kindness what is possible. I want to choose the path of positivity, purpose, and passion. I want to be vulnerable and show emotion. I want to communicate without seeming closed off before the conversation starts. I want to control my anger and see things from another perspective.

I’ve been all talk over the years, and it has worked great in the short-term, but anyone worth knowing is worth knowing forever, all their ups and downs, their beauty and faults. I want to walk with them in honesty regardless of the outcome of our selfish choices and learn better how to live with who I really am, even with the pressures of society and media to fit a certain mold. I will make mistakes but I will own them because they help make up the threads of my being.