I woke an hour before the alarm went off and we got gas at 4:30 before getting on the 2 South that would take us to the border to wait thirty minutes until they opened at 7am. The agent asked me questions and then said, “Welcome Home.” That’s usually what I say to Caleb and he says it’s because of the Montana license plates. I tell him it’s because we’re U.S. citizens, but either way it’s nice to be welcomed.

We get to the east entrance of Glacier National Park, open at 7:30, but I don’t know why since most of the park is still closed for the season. We pulled in to the Mary Valley visitor center excited that we would finally drive through Going To The Sun Road, but we were shown a picture of the visitor center at Logan Pass and told the earliest the road would open would be at the end of June.

Outside of the park we stop by the river so that Caleb can get the dogs two gallons of glacial water and give his hands some shock therapy. Piggy and I stand in the grass while Sparky climbs on the rocks to supervise. We drive farther south to another park entrance, Two Medicine, and hike half in mud, half snow on the Running Eagle Falls Nature Trail until Caleb slips and I almost fall from laughing. The falls are named after the only Pikuni woman to have a successful vision and spend her 30 years of life being an inspiration.

We drive to the end of the road where there is a watercraft rental shack, a picnic table, and a small floating dock in front of Two Medicine Lake with Rising Wolf Mountain, among others, staring down at us. We are enjoying the peace while two guys are taking pictures with their lens the size of a forearm when this couple shows up and starts breaking sheets of ice on the lake by bouncing on the dock – also causing enough noise to scare away any animals that may have been in the vicinity. 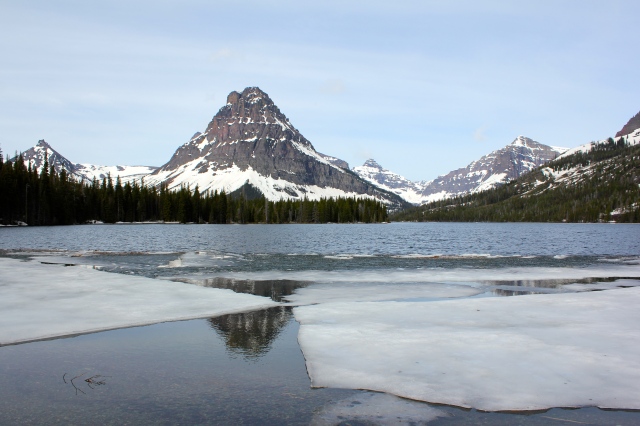 This doesn’t stop us from still looking – and there’s something appealing about following old footsteps through the snow and over patches of water, spots of mud, and piles of broken branches. We could get dirty or break something on us – it’s a thrill, and right now we are the only ones willing to go, so it helps separate us from the racket. I tell Caleb we will turn around soon, but feel like I’m being pulled deeper into the woods – until I slip on ice – then I’m ready to go.

Before the Montana Highway 49 intersects with the U.S. Highway 2 there is a small town known as East Glacier Park where the World’s Largest Spoon, Big Martha, resides beside The Spiral Spoon that makes wooden replicas. They weren’t open, but Brownie’s Grocery and HI Hostel were so we went in there for drinks. I asked for a coffee, but got something else – like asking for lettuce and getting a Caesar salad. I’ll drink it later as I drag myself away from the case displaying all the fresh baked items.

After that we headed toward Kalispell through mountains that leak liquid beauty. One is close enough to the road that you can park and jump in, but I wouldn’t. The waterfall is tall, but is made of stone stairs that splash onto a rocky floor – beautiful to look at and touch, but dangerous to interact with otherwise. Then we come to the small town of Pablo where we are graced with the sight of their pedestrian bridge completed in 2011 to protect people on foot from the traffic of Highway 93 that was reconstructed into four lanes.

Pleased to meet you, Sammi!

Then it was south to Missoula, down curvy roads and under animal overpasses, where we would get to his dad’s house at 2. We talked for a bit and then Caleb told his sister we made it to town and we all went to her house to watch the girls make themselves into mud goblins. They got hosed off in the yard before getting showers. Sage, one of Sammi’s friends from school shows up and they are playing in the backyard when I overhear Sage telling Sammi (who is acting like Sparky), “Sparky sit or I’ll give you a treat.”

I went in the house snickering to myself while I told the others what I had heard. Sammi’s parents decided play time was over and it was time for Sage to go home (she just showed up at the door) so that we could get out of the house. We went hiking at Crazy Canyon – a nice forest walk close to the house – and no reference to the hikers. We smell the sweet sap of the ponderosa pine and the girls build cairns. Grandpa sits down to rest while we go to the trail intersection and turn around. We pick him up and some flowers from the trail on the way back.

At home, Jake and Caleb go to the grocery store where Caleb learns how expensive fish is in a land-locked state and remembers how pricey meat is in general. Meanwhile, the girls have a tea party with Jessi, Sparky plays ball, Piggy takes a nap, and Robert and I talk. Jake makes fruit skewers (some with shrimp), with grilled peppers, asparagus, corn, and hotdogs for the girls.

We eat and watch part of Frozen and then take Robert home, talk for an hour, and pick some lilac from his tree to make the car smell nice. Back at Jessi’s we are greeted by her, Sammi, and the dogs before brushing our teeth and watching our cute dogs fall asleep in the chair in the room – enjoying the warmth and quiet after a long and loud day.