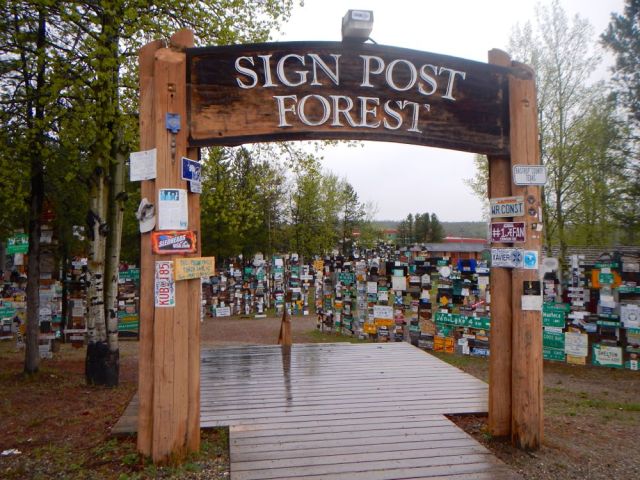 Breakfast was a banana with peanut butter, two Oreos, and two raspberry fig bars. We drove in the rain for four hours before stopping in Tetsa River for split pea soup (with ham in it) and watermelon and bread on the side, a loaf of sourdough, and a cinnamon roll. There was some interesting soap names – Polar Bear Breath and Mangy Coyote, but we ate the soup and ran back to the car in the downpour. 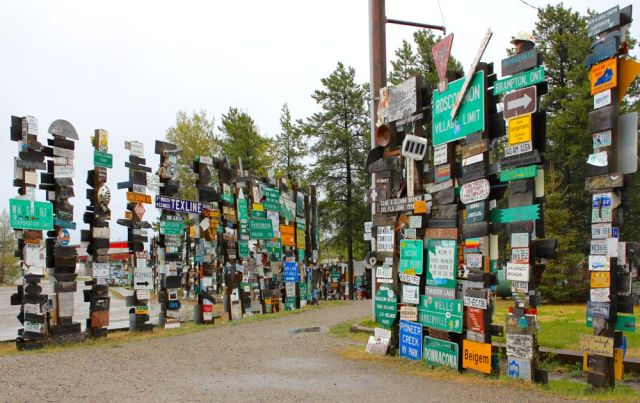 We would stop to see young moose, mother bears with their cubs (some learning to tree climb), and lots of buffalo – laying down, walking, and eating. We saw more of their poop on the roadside and some of their muddy nests in the grass. Some were alone and others in groups. I saw a large grayish looking dog with hunting eyes and big teeth – wolf! But as we turned around he headed up into the trees and I got a blurry picture of his ass. I was hoping to see another one from the pack, but this one seemed to be on his own. 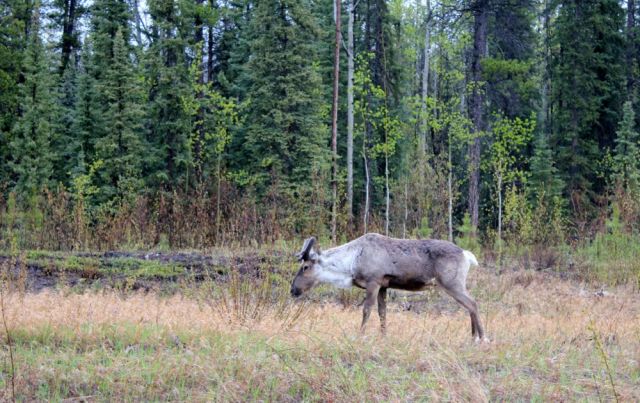 We stopped outside of Fort Nelson to throw the ball for Sparky, then headed to the gas station. I was sitting there while Caleb pumped the gas and we weren’t paying attention to the different old guys (retired with gray hair and glasses) walking by. One guy put the gas pump back up before his wife told him that wasn’t their RV, an exact look-alike is parked on the edge of the lot – a mass of confusion – and giggles follows from us. 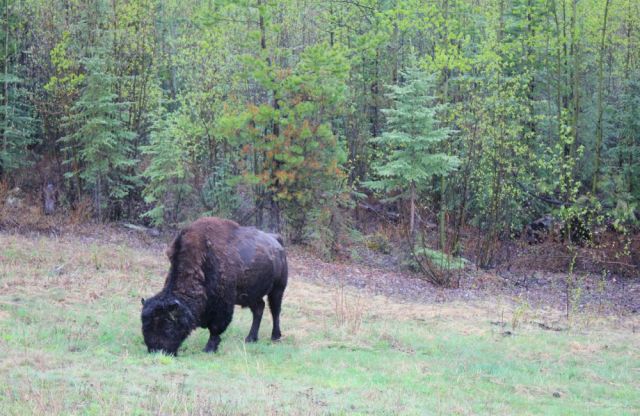 We asked where we could get the oil changed inside and the guy pointed down the street and told us it was behind some building. We didn’t find it before we passed the information center and inquired inside. The guy was kind enough to call ahead as many places either didn’t have the time or didn’t want a traveler’s business. He found us a place that would do it – Sikanni Auto – down on the left. 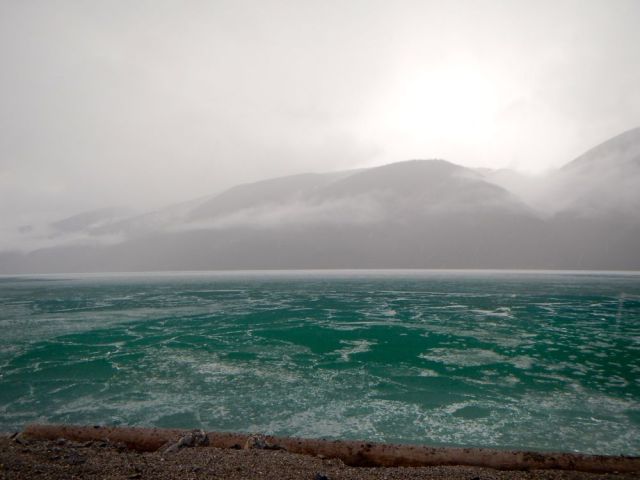 We found it. A lot of businesses in Canada might not look open but that’s because it’s cold and they conserve heat, light, and energy. We walked in, met their friendly dog, and our keys were taken. Dana, the owner, came from the garage to keep us entertained while his daughter changed our oil, checked our fluid, and changed our air filter. The service was the best I’ve ever had – and that’s over ten years worth – but I wasn’t expecting what came next – the bill. We are charged over $100 while listening to stories of this guy’s killer dog that loves to run and his life’s injuries. We laughed then, but Caleb figured we could pay that much or have to wait all weekend – over a thousand miles later to come to a shop that was closed. I also consider we got a discount when a friend got half-off and left minus $1,000. 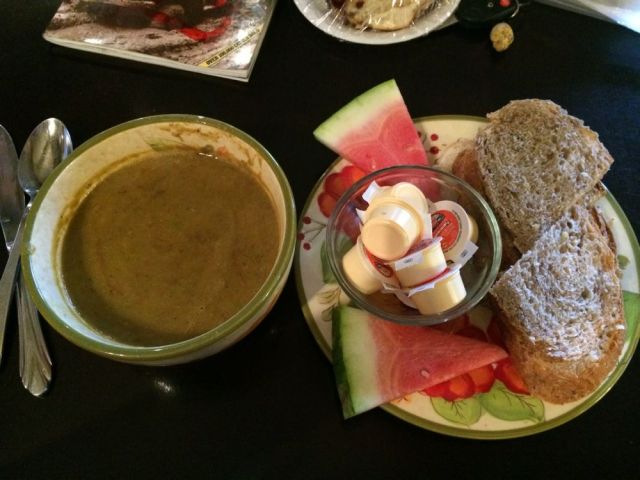 The rain finally cleared up and I was able to enjoy the view again – not that rain is not conducive to great visibility – the animals love it and we noticed a traffic increase – lots of trucks with RVs and our second rude Canadian traffic encounter. The first was near Fort Langley when a car pulled out when my light was green and I swerved around him. This incident would be a semi going too fast in the rain around a corner and using my lane to make-up for speed and direction. Lucky for us, I’m a better driver now than I was during puberty with a driving permit in my first car and don’t scare so easily. 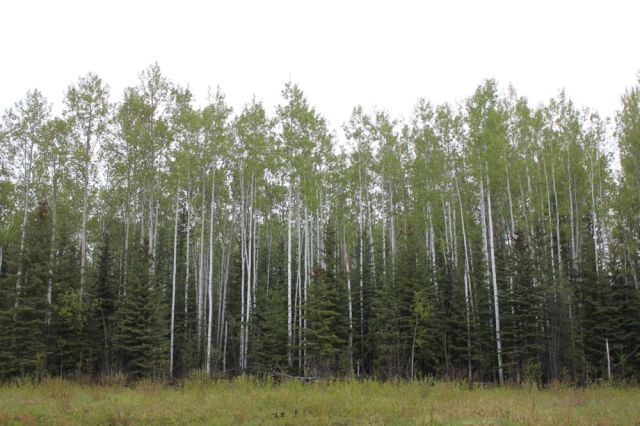 Caleb will take over the driving so that I can read from ’Tis – our only paper reading material that we brought with us that hasn’t been opened in a while. He will drive us past homes and the fields across from them and a deer. We will sleep at Howard Johnson in Fort St. John tonight. We wanted to stop early and didn’t check in until 9pm. The room costs $119 – Canada is too much for our wallet and I fear looking at our credit card statement. Hopefully tomorrow we will be far enough south to sleep in the car again – 50s is doable, but 40s is too much with the little amount of warm items we brought. The first thing in the room I notice is the children’s book, “Tiny Steps Stories: and the moral is…” before feeling the working heater. 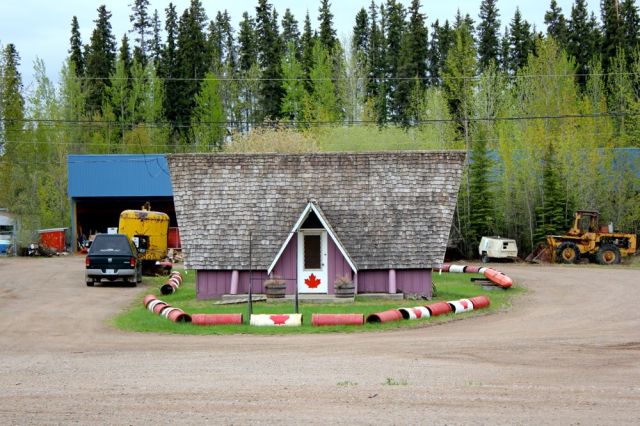 We brought our things to the room and then discussed walking a trail along the railroad or relaxing in the hot tub and sauna – and the hot choice won. We changed and walked down the hall and down the stairs one floor to doors (separate for men and women) with signs on them that say ‘out of order’, but it sounds like the mens is on so we walk in and dip our toes in the cold, bubbling water. That choice is out but now we don’t want to drive across town and walk around anymore either. Seems we will spend the rest of the evening relaxing in the bed with sleeping dogs – sounds good to me after being in the car all day.