Our last hike, to Tecate Peak, was such a success that we decided to try another one. I woke up at 5:45 in anticipation of what the day would bring and so we could leave Betty’s house by 7 am. I ate half an apple on the way there and she made me an avocado sandwich and gave me a banana to finish my breakfast. We start our hike at 8 am and passed the same bridge by the beach going in two different directions – we’re lost. 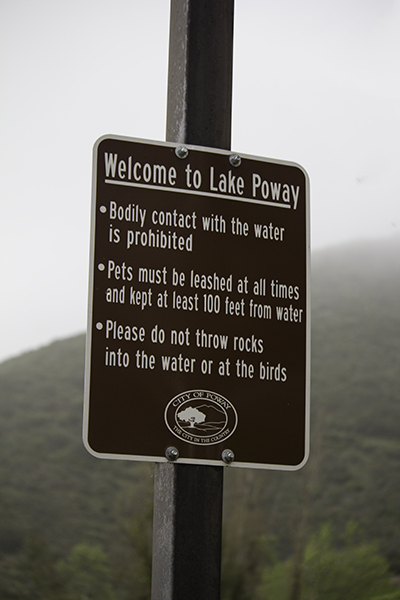 We follow the group going up, today will be exceptionally crowded according to some regulars, until we find our way. The trail mileage doesn’t start until 2.9 miles from the summit and the trail is 8.7 miles round-trip. We make it from parking lot to summit in 2 hours – at one point hiking one mile in 20 minutes – with an elevation gain of 2,000 feet or more. There was a big shade tree with lots of people stopped and a line for a photo-op on Potato Chip rock which is very near the summit.

On a clear day you can see the Pacific Ocean, San Diego, etc. Today wasn’t that clear, but the clouds were beautiful rolling over the hills and the view was still great – though we only saw part of it from where we considered the summit. The trail leads up to towers and paths with multiple views. We chose a spot with some shade to drink more water. The way down would at times almost be too quick. Gravity helps pull you down, but some of the rocks blend in with the dirt and the crowds of people don’t help either when they know you’ve got momentum bringing you down fast.

No falls this time and though parts of the trail are a squeeze there are wider parts for group photos – which there were plenty. There were big dogs (expected) and a tiny dog (more hair than anything) and a beetle couple procreating on the trail lined with lizards, flowers, and rocks. On the lake were ducks and boats filled with fishermen of all ages. On the beach were people feeding the ducks and people with fishing poles.

Lake Poway Park is a great place for families to fish, picnic, ride bikes and horses, and hike. It’s a calm place to relax and an exciting place to exercise. I managed to get a few more pictures on this hike and look forward to bringing Caleb up this mountain. Once we were done it was time to find lunch. Betty had a brewery in mind, but it’s closer to another mountain. There are 2 or 3 near Poway that only offer alcohol. We need more than that after the calories we burned.

a clouded peek at a mountain peak

We finally found Oggi’s Pizza & Brewing Co. We found their menu to be tasteful and fattening – just what we needed. We ordered garlic knots and the Wimbledon (with sun-dried tomatoes and pineapple) 14” pizza. Service was kind of slow, but we were in no hurry enjoying the A/C. Betty drove this time, so lunch was on me, but she wanted to leave the tip – no problem, though even after 3 hours of hiking/running I wish we would have split the leftovers as they became every meal the next day.