Swim With a Turtle; Hike With a Pig

Posted on November 24, 2016 by TheJessicaness 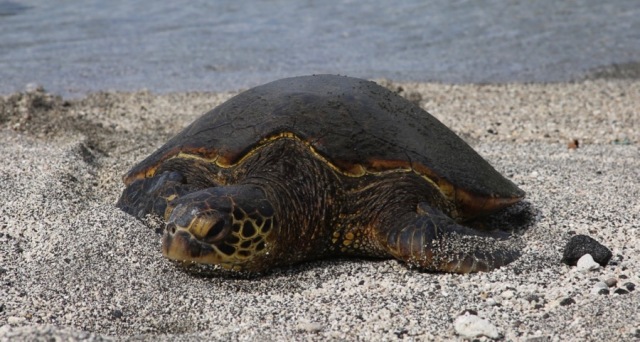 I felt late waking up this morning. I grabbed my toasted, buttered English muffin with slice of pineapple and papaya to-go. We were almost to the car when I remembered the key was in the room. We got to the dock 20 minutes early and walked to the store to pass some time. There we’d meet a father and daughter that would join us. He spoils her, at 13 years old, with diving and Disney while the wife tends to the 4-year-old twins at the spa.

Pre-boat brief to know which dive team we’re on, how much weight we need (the 6.5 ft tall father/son gasped when I said I needed twice as much as them), and which tank number we are. We took our shoes off and boarded. One lady was snorkeling, two girls were getting qualified, and the rest of us split between Marc (wearing same dive watch as me) and Taka (who attempted to play the seashell for us). 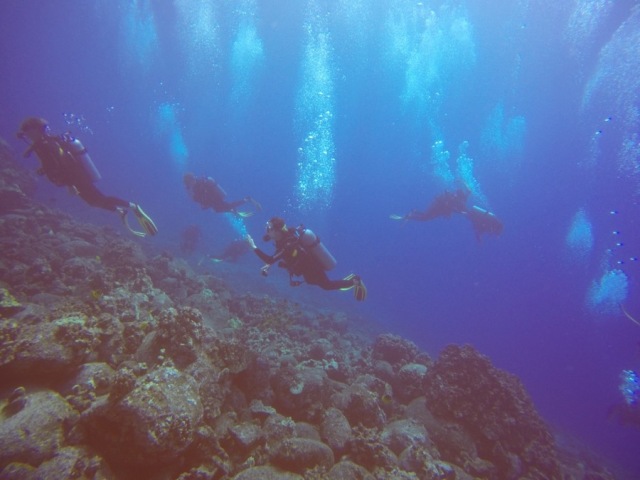 They briefed us on what we might see and attached anchor to the buoy. Caleb and I were the first in the water and waited on the other six in our group to join. The water was colder and the visibility not as great, but you could still see the 40-foot bottom as if it were five feet away. I descended easily to 30ft and knew the weight would be a struggle. Back at the boat I was told to inflate my BCD and deal with it that way.

I wasn’t happy about it, but also not mad enough to make a bigger deal – good thing I workout sometimes. I told Taka I’d be tired and went back down. The quick changes wreaked havoc on my inner ear. I waited a moment at 18ft, again at 30, and by 50 it was working itself out. That’s the most air I’ve had at the bottom, though we definitely didn’t go all the way, I could see sandy floor, but we were interested in the fish, eels, and tiny shrimp on the back of a sea star. 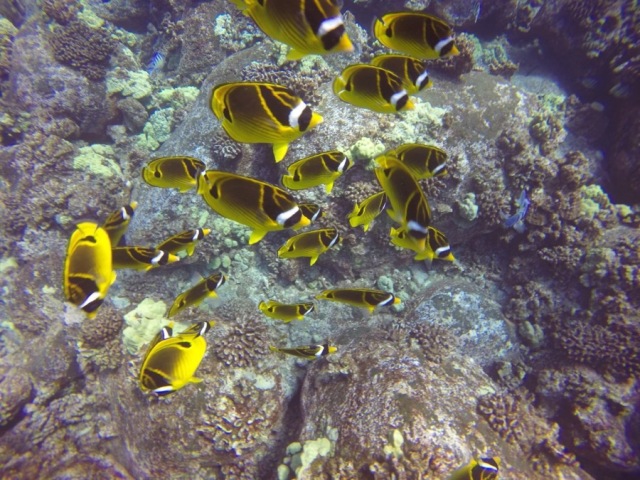 We went under an arch and I saw a long-nosed fish and a puffer fish and another using its feather-like fins to swim. We saw a school of black fish with rear fins with a blue line at the base. We swam some more, a total of 60 minutes, for the first, but what made this dive was the sea turtle! I forgot about everything else around me for a moment as I swam beside him getting some pictures and a video. Then we were called back to the boat, waited our three minutes and surfaced. 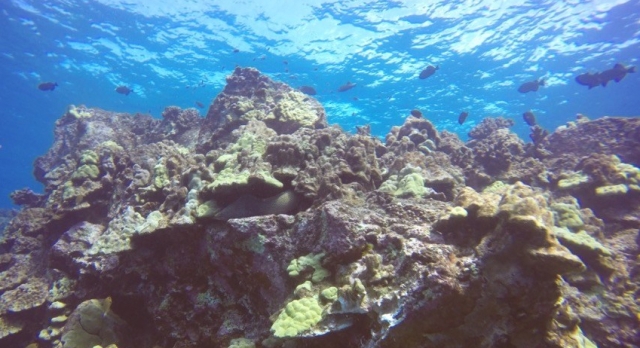 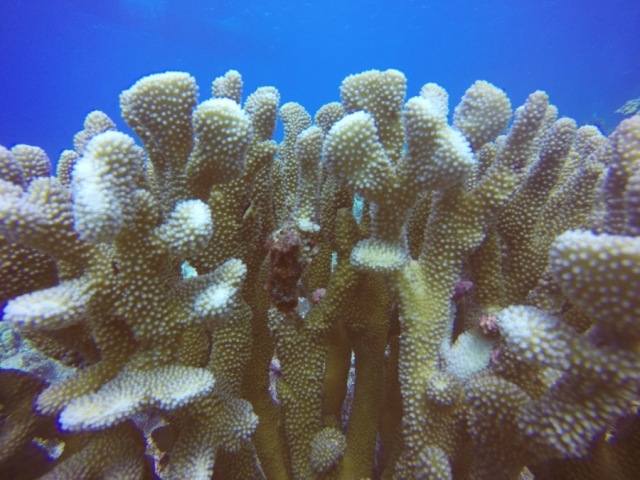 I had at least half a pineapple, a bag of small chocolate chip cookies, and two rice krispie treats. I stayed in my suit for our hour surface interval. We pulled up anchor from Big Arch and moved to Fish Bowl where we’d talk with Marc, a dive master with a science degree who retired from insurance in Philly to learn the trade in Hawaii.

For the second dive I went down with ten pounds and the difference was major. I enjoy their mask strap so I don’t have to worry about rubber on hair. I had to clear the water from my nose twice on the first dive and the regulator was too loud (like a flapping engine) on my exhale, but mostly with looking up. We went to the bottom, but stayed about 20 feet higher to allow us more time. Caleb took advantage of this and as I was going to the rope to hold on for my three minutes he was making his way to the surface.

I waited for a few others to climb up before me while I waited at three feet. Caleb said 400 psi equaled running out of air for him. We must’ve finished the pretzels after the first dive because they were gone. We took off our wetsuits and filled in some information in our dive logs while the team cleaned up and returned us to shore. I thought about lingering for one second and then remembered that we had plans. 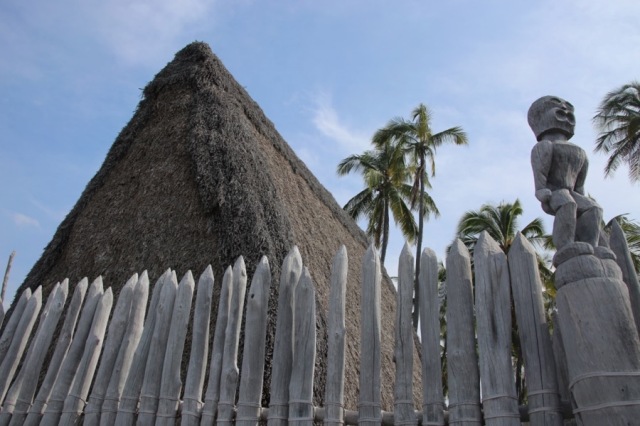 I was going to drive us straight to the fourth national park, but my purse and camera were in the room, so we stopped for showers too. There was a market across the street, but the bananas looked too ripe, the mangoes from Ecuador, and the lady couldn’t tell us how to use the large green fruit – some need machetes or cooking, neither of which we have. We figured we’d find something on the way, but all the Thai restaurants were closed.

I noticed people at a table, turned around near the hitchhiker with a dog, and parked poorly at an angle. People were walking out and hugging this guy so Caleb asked him for a table for two. He smiled wide and told us to go inside and grab some food for free. We were taken aback and he apologized, but said it’s their (Salvation Army) annual tradition. They already had plates ready which saved us more time (it being around 1:30) and Caleb gave a donation. 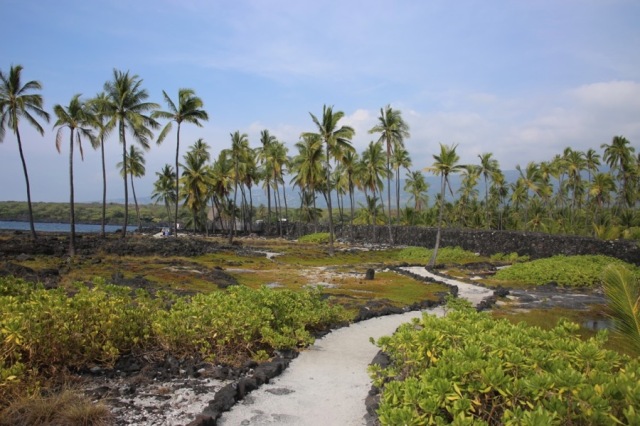 I stamped my passport at Pu’uhonua O Honaunau National Park and then we took their 16 stop tour around the rich people area, so guarded that the poor weren’t even allowed to cast their shadow, but if you broke kapu and survived the police chase you could be saved by a priest. We were interested in the Hawaiian checkers and Ranger Wendy had the game pieces available so she challenged Caleb to a round – he won, and got a prize – palm leaf fish swimming into the moon. Our parks for Big Island are complete and it’s only 3 o’clock. 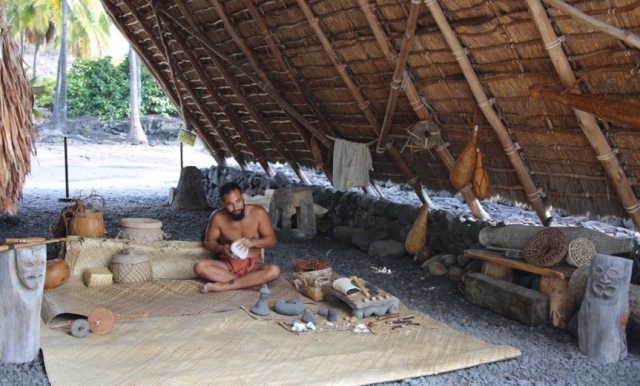 We think we’ll load up on food and spend the evening relaxing. We start off by stopping at a farm stand where I drink a coconut and enjoy its wet innards with a spoon made from the shell. We try dried apple-banana and then the drink and smoothie concoctions come out of the fridge. We leave with a jar and a bag. We go up the ramp of a road across the street just to peek inside the grocery store and end up leaving with a stack of groceries in our arms to avoid the 20 cent paper bag fee.

We get to a large intersection where we usually turn right, but parking on the left leaves you walking distance to a warning sign for the Captain Cook Memorial. It says we’ll need boots, water, and 2-4 hours – we go with none. Caleb will regret his choice to forge ahead with no water while wearing flip-flops. Falling down the mountain is easy – through tall grass and over volcanic rock. We pass a guy getting his pets out of the house – two small dogs and a parrot. He says we might make it by sunset – if we tuck and roll I believe. 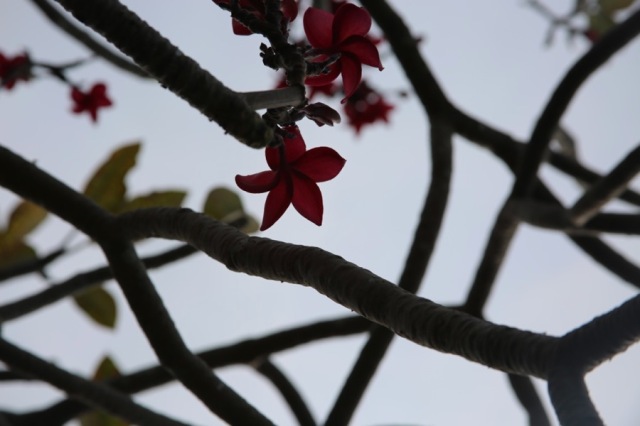 We passed three couples and they were increasingly sweaty. We got to sign 6 of 8, no measure of trail length before we turned around to enjoy our 1,000 foot climb back up. We got to see the back of a loud pig, a few cows, and one bright red centipede. We heard a guy laugh out loud, literally, and watched the sun go down on our retreat. We finished our drinks as the sun was done with lighting the sky.

We successfully used all the daylight and now we could relax, plus our bodies were tired. We get back to the room and bring in the food, stop by the front desk and get free almond milk, and return to the car for drinks and trash. Caleb sits on the balcony with beer and a book while I write and bring us sushi and salad to eat. We’ll move inside at 7:45 when I get two dime-sized bites on my right leg. The tiny mole-sized one on my left leg itches more.