5:15 came early again this morning, so I went back to sleep. Caleb woke me up and walked the dogs while I got ready. He grabbed his bag of work stuff to put in his locker on the boat and we got on the road. I dropped him off on the corner and when I got home he let me know that he still hadn’t been picked up for work yet. I wished him a Happy Birthday and he tells me that the duty vans just went to the hotels this morning. It took an hour for him to get picked up, so tomorrow I will drop him off at a hotel so he doesn’t have to deal with that again.

I published a post and then took the dogs out after lunch. Making our way across the parking lot a dad stops his SUV so his wife and four sons can see the dogs. He tried asking me something, but I couldn’t understand – to pet, to take picture? We get to the grass and a car stops to ask if they are for sale – after Sparky just peed all over his own leg – maybe I should’ve named a price, but I said no too quickly. He asked about even for a day and drove off when a truck neared. Then where we turn around a blue Hummer passed and began to back up. I turned around and pulled the dogs with me. If they aren’t for sale, than they aren’t for stealing either.

one of the many rides inside Seef Mall

Up the stairs and the dogs’ fan club is waiting. The man’s sons have their hands and phone cameras ready. It’s windy out and my hair is in my face. I hold Sparky and pet him, but when a hand comes near he growls, so I hold him closer and pet Piggy. They pose with their hands on her while someone else takes the picture. I make their day and maybe an older brother or random guy too that comes upstairs in time to see the action and take a picture. Men are less likely to mess with a woman in a bikini or tight running gear than one covering her knees and elbows while walking dogs.

Caleb texts me that he’s off work and will meet me behind security on base. When I get there he’s telling two guys how they should use their 45 days of TLA (travel money) and stay in the hotel before signing their lease to move in. We go to the NEX to find him a new pair of flip-flops, ones that won’t leave blisters on his feet. We end up getting another pair for him to wear in the shower on-board. I have more trouble finding something, so we decide to go to Lulu’s where the boxes for the shoes aren’t necessarily under the display. I look at the men’s section in both stores with no luck.

they even have bumper cars in Seef Mall

We were going to go to the City Centre Mall, but tried going in the delivery entrance and passed the parking entrance on our way to Seef Mall. We wandered around with me trying on all kinds of shoes – women’s, men’s, and all sizes. Turns out I’m a size ten here with the heat making my feet swell or they have different sizing, or both. We go into Payless ShoeSource and instead of finding sandals I find a pair of flats with owls on them. Caleb lets me get them – and even the guy behind the counter asks if they are ok with him.

We walk into a random shoe store and I see a pair that I think I will like. They are brown on the bottom with a teal top. I put one on and then the other. I think that if I don’t like them I can always get something else – they are only $40 – who am I kidding. Growing up that would be two pairs of shoes – one for my birthday (that coincided with the start of school) and the other for Christmas because Grandma was buying. I just thought they were $40. Turns out they were BD40, but Caleb didn’t tell me until we had receipt in hand because he didn’t feel like going through another 20 stores where he saw so many options.

cardboard and packing tap on a moving van

Now that we both had two pairs of new shoes we could go enjoy his birthday dinner. We headed to Señor Paco’s – a Mexican restaurant in Adliya where the scenery, hot sauce, and drinks make up for the mediocre veggies and beans. We’re seated in a corner and feeling romantic. There’s a large party gathering in the back. My nose is running with the salsa and I’ve finished my first margarita. The second one, peach flavoured, arrives at the same time five girls do. They sit next to us and order pitchers as I take bites of my food. We filled up on two bowls of chips. Caleb orders tea and gets a mini-pitcher of simple syrup to sweeten it with.

He offers to drive, but I take the wheel. We are headed to base. If we can find that, we can find home, and he’s hoping to buy some Kahlua and Sprite to make me a Mind Eraser when we get home. The liquor store closed at 8pm, 13 minutes before we got there. We are standing in front of the car, I’ve unlocked it, and am pushing the little silver button to get the key part out of the fob when the whole thing slips from my hands, hits the ground very close to a drain, and then bounces into the dark unknown. 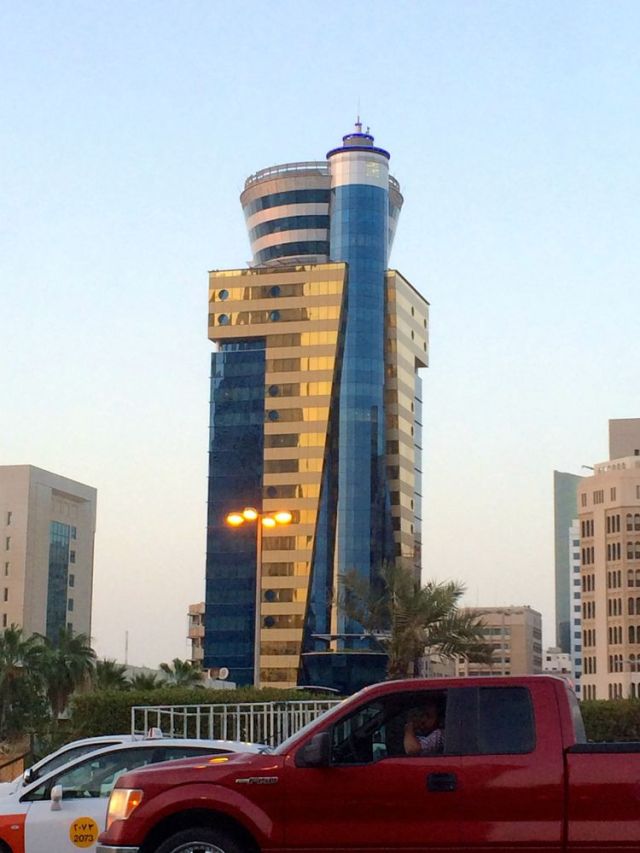 First instinct – scream on the inside. Second – state options: we could get a taxi or just sleep in the car. Luckily as my panic starts to set in the guy that helped us park earlier is here to inquire on our needs. I say key and point to the hole. He runs across the lot, grabs a large metal pole, and pries part of the drain up. With the flashlight on my phone I was able to see the key stuck two feet below in a pile of muck. I go to the base and get through three sets of security and inside the building without showing my ID to ask for a wire hanger. They tell me to go to a store near the KFC on American Alley.

I’m on my way back to the car when I’m abruptly met by Caleb dangling our key in his hand. Then he asks if I have any money on me to give to the two guys that stopped to help us. I know they didn’t have to and they put so much effort into it. I’m glad he thought of it too. I have BD1 and $2 in my wallet – a close split. The key part may still work, but the auto lock/unlock doesn’t. I’m about to freak out again. “How am I going to get into a car without pressing a button to unlock it?!” Perhaps you could put the key in the hole. I’m so grateful for Caleb’s calm response.

the entrance to the courtyard of Señor Paco’s

Once happily in the car we talk about how long it’s been since I’ve had to manually unlock a car – at least seven years. I feel bad for the rental company. We may not have broken the key part off like the other renters did with the spare, but we’ve broken the fob in another way. Going home is neat. The last time we were out this late I was in the back seat of Master Chief’s car going to the airport to get the dogs. This time I can enjoy the lights: advertising on the bridge, missing on passing cars, and reflecting on the water.

I’m worried about parking when we get on our street but I’m guessing with it not being a weekend we are luckier than we otherwise might’ve been. We get our most common spot – on the other side of the fountain from our room – and the guard comes over to help me with my door. I could get used to this – a country based on friendly service, and so many people to provide it at all hours. I can even handle the heat, but the humidity will stay on the same list as the wind in Chicago and the mosquitoes in the Everglades – the things I can do without list. Happy Birthday Caleb!

1 Response to Caleb’s Birthday In Bahrain