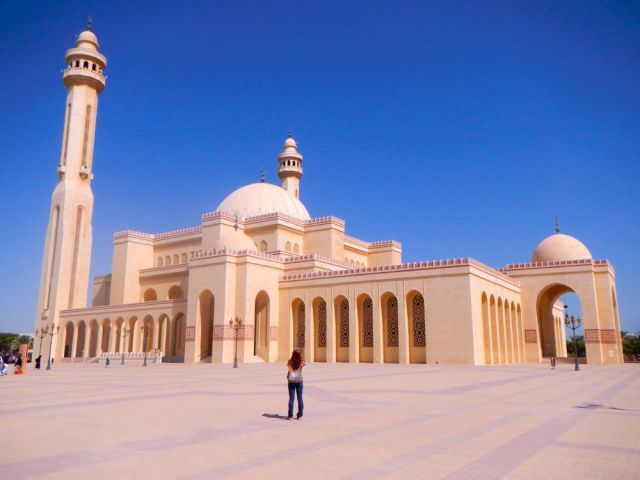 Sparky woke us up again so I shut the bedroom door. Then he woke me again by barking hours later and I opened the door. I was going to get up at 4am but I really want to get on a schedule so I went back to sleep. When my alarm went off someone had used the floor as a poop pad somewhat close to their water and food bowls. I took a shower, tried on some of my new shirts, and then took the dogs out. Caleb thinks the shirt I’m wearing looks good so I stop to take a selfie and in doing so see a bug in the grass. I squat to get a picture of it and it lands on me. I jump up photo-less.

We bought a lot of fresh fruit and I’m trying to eat it before it goes bad. I had three bananas yesterday so I thought I would try the mango in the bottom of the fridge. I put it on the cutting board, use the extra long knife we’ve been given (along with plates, bowls, and pots), and slice up one half. Sometimes I cut close enough to the skin and other times I have some left. I was cutting off the extra and tried a piece. I know I made a face but I guess Caleb didn’t see it as I handed him one to try. He told me it tasted like pear and I told him it tasted like soap and that he could have it. 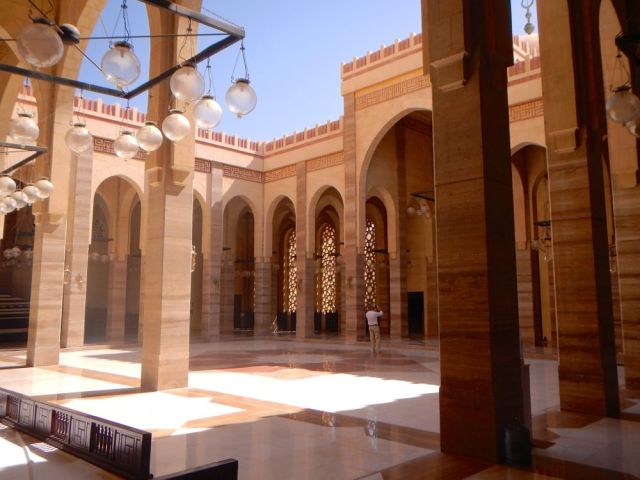 Corn flakes with banana and whole milk for breakfast. I haven’t had so much dairy in a long time. I think I will cut back for a while. We get to the chapel on base 30 minutes before our scheduled departure. Caleb and I hang out upstairs until I hear more people downstairs and we go to join them. One of the guys lets Caleb know that he has to wear pants today and that he has time to go to the NEX because the buses won’t be here until 8:20. We power walk our way there, he tries on a pair, grabs a different pair, and my phone rings. I pick it up to hear my dad’s lovely voice on the other end after a long day’s work and my day is just beginning.

We talk for a moment but my phone reception isn’t great on base – the military has other priorities. Caleb changes and we power walk back. When we open the door we have to wait for people to get out of the way to let us in. Ali, the tour guide and local speaker from indoc, is taking roll. I learn that the young cheerleader-looking girls are college students doing a semester for their program that takes students worldwide to bases around the world. We walk back out the base gate to the buses that are waiting in the round-about.

rihal, a wooden book stand to keep the Qur’an off the floor

I sit in the seat directly across from the doors and wait for all the others to pile on. There are supposed to be 50 people total and two couples brought kids – a 14-year-old girl, a toddler, and a boy with four teeth. The couple of the two babies also decided to bring a stroller, a car seat, and a hand carrier to try to fit on the small bus. The tour guide put the car seat up front with the driver, the stroller went by the stairs when the door was closed, and the carrier next to mom. A cool feature on the bus is the fold down seats in the aisle making the back four-seats wide.

a mihrab that marks the direction of the qiblah (Mecca)

Our first stop was the Ahmad Al Fateh Mosque a few blocks from the base. We took pictures outside while Ali got the people inside ready for us. The guys go in and take their shoes off. The girls go in and put on an abaya (robe) and a hijab (head scarf) to help conform with the other people while they worship (they’re here for Allah, not the female figure). I thought I had my outfit figured out before this short woman comes over, grabs pieces and tucks them here and there, and nods.

I look around and people are falling out of their traditional wear – some abayas to small and all the hijabs just tossed on. I pull on mine to try to cover the top half of my head, but now we are back in the foyer area and I don’t want to be so revealing. We walk into the main prayer room that can hold 5,000 worshippers – and usually does on Fridays. Our tour guide, Ahmed, tells us to look around and take pictures and then he will talk to us.

peeking through the decor (child guard)

Most everyone sits down, but I’m fine with standing, and the two-year old is free to run around if it means he will be quiet. Ahmed tells us that the designs on the floor, walls, and windows have no religious significance but were used because they are simple and don’t distract from the purpose of worship – the same reason women and men don’t pray together. The black balls among all the handblown lamps from France are speakers – not incense or cameras. The carpet is from Scotland and the wooden doors imported from India are made out of teak wood. It was finished in 1988 at a price of 19.9 million dollars.

We walk up the four sets of stairs, feeling the breeze from the open courtyard, to the second floor. Here we will walk around again and then sit for a history of Abraham, Isaac, and Muhammad. We will learn that the men chose to wear white attire because they worked outside and let women wear the black while they worked indoors as over a thousand years ago it was easier to make black and white clothing. We learned about the pillars of Islam and Ahmed tells us that he’s been to Mecca twice. It used to take four to six weeks by camel and now only takes him five hours to get there – hence the travel restriction of only two million visitors annually now.

While we put our shoes back on and return our clothing there are ladies offering free reading material, calendars, and juice boxes. I choose pineapple juice to drink and Quran: A Short Journey and The Man in the Red Underpants – both by One Reason to read. Caleb mentions the translated Qur’an and the lady is kind enough to get us a copy. Caleb notices the English (read left to right) next to the Arabic (read right to left) and wonders if the book is written backwards for them or us.

On our return to the bus we learn that a new guy on Caleb’s boat learned conversational gulf Arabic while in Egypt for eight months getting his degree. He’s also a BUDs dropout that became an IC (interior communications) so that he wouldn’t have to deal with the fraternity mindset of becoming an officer. His barracks roommate is an ET (electrician tech) that is only 19 and started working in a machine shop for his dad when he was 13. He got tired of the 14 hour days and chose a different line of work.

tapestry for sale at Capital Mall

Back on the bus and there is a girl in my spot. I’m ok to sit somewhere else, but the seat behind that has water bottles in it, the seat behind that has a bag in it, and the seat behind that has the baby carrier. I sit with the bag and Caleb with the bottles. This gives us the chance to talk to the family of the 14-year-old girl. The dad is prior military who got discharged for rheumatoid arthritis and the mom is GS-12 (equivalent to an O-4) contracted to work out here. We get BD1,041 for rent and she gets BD1,400. They moved here from Naples where they lived for six years.

Our next stop is Capital Mall where handmade goods are made and sold. We get to watch a man basket weave for a bit, but have to look quickly at all the clothes – knitted and embroidered, pottery – painted and in-process, jewelry – big stone necklaces and small earrings, magnets – made of cardboard, woven carpets, model wooden ships, and the room full of spices. We are getting ready to leave and the mom hands over her baby boy with blond hair and blue eyes to the local ladies so they can take selfies with him – they thought he was cute and I heard one compliment his hair. 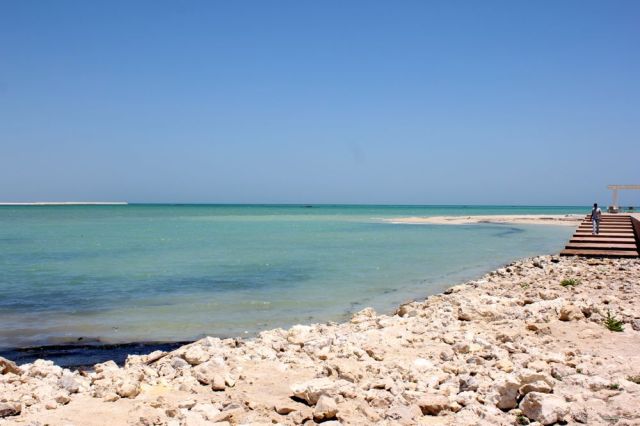 We get to the Bahrain Fort at 11:30 and are warned that we won’t be staying long as the heat of the day only goes up for hours. I recognise the large mosquitoes from Caleb’s pictures, but aren’t given the chance to recall anything from the inside as we all make our way towards the ruins. This is one of the two UNESCO World Heritage Sites on the island and I’m thrilled to be here. There is one way in and while we are walking in the breeze I could last for hours, but inside the walls with the sun staring at us between rocks I feel like a piece of fish on a solar stove top being baked to death.

ruins outside the fort

We catch a break going downstairs into their storage areas – some having lights and sounds playing. My favorite was the room that resembled the largest game of cat’s cradle ever or a scene from Saw. We scared a girl thinking the same thing on her way down. Lots of history and artefacts here, but not enough time to see them all today. We are one of the last people to get back to the bus. We might’ve been left had it not been for the three people behind us. We will be going back, in the hot season versus the hotter season, so that I can go inside, we can possibly snorkel there (away from the water bottles on the beach), try some food from the café, and walk around more of the fort.

Manama in the background

Now that everyone is dripping in sweat and starting to burn into their food stores it’s time for lunch. I enjoy that this tour takes us to different locations around the island. We aren’t told to look out the windows at anything particular but the view is still there – for the people who can appreciate it. For those that can’t, I don’t know why they bothered to come. Lunch is had at the Veranda Restaurant. We pay our BD6 at the door and sit at a table for two, leaving all the larger tables for groups of navy guys and college girls.