To The City of Secrets: Part 2

From this morning… I wanted to take lots of pictures to commemorate our time together and show Caleb what I did while we were apart. The carpet has squares and the walls have circles and there are rectangular desks and lamps, but what we begin to notice the most is the amount of cameras and security personnel. Every shop, restaurant, hotel, casino, bar, restroom, and bench comes with a camera and someone to guard it – whether seen or not – and I’m totally ok with this as it makes me feel safer walking around drunk in a bikini if I choose with tons of money dangling from the strings – but I do think that’s taking a risk.

We decided to stay in our traveling jeans, but as the sun sets around here the scene changes. There is more skin, jewelry, feather boas, and fishnet stockings, but the same amount of men in suits and police in uniform. There are floor-to-ceiling lights near the café in the lobby and a large picture of a bunch of recognizable faces (from the 80s) on the wall, but a good way to tell if you’re drunk – there were a bunch of guys surrounding it and wondering who all the people were – or maybe it’s just a good judge of age. I spotted John Travolta and Robin Williams – could also be taste in films. 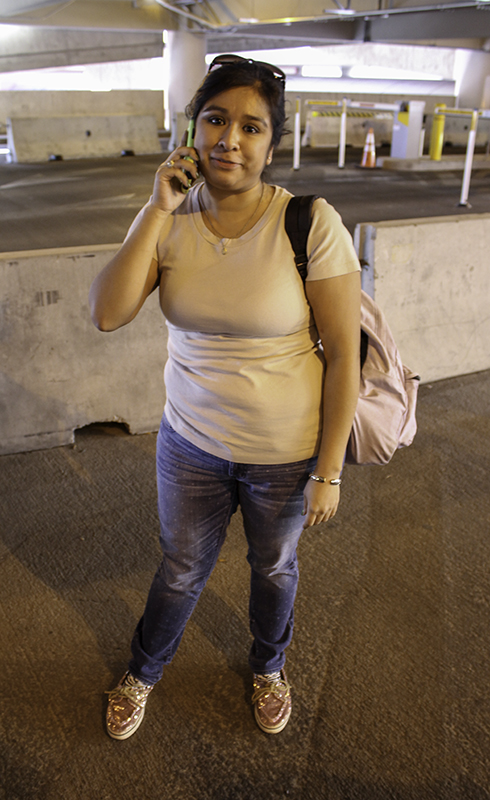 Deanna in the airport parking garage

Each section seems to have its own theme from shiny floors and circular lights to bright carpets and long lights. Everything looks new and is constantly being cleaned. Then we smell someone’s strong perfume that must be following us – or it’s the scent that pours from the vents to cover the smell of smoke (legal indoors here), sweaty gamblers and drunks, and vomit or anything else that would make someone less likely to eat, drink, and spend money – or lose cash happily.

I had glanced over the list I made, but having no idea where any of the places were (some requiring vehicle transportation) we decided to walk and take the night as it came at us. We were overtaken by the multitude of shapes to drink booze out of, by the amount of poker chips on the craps and blackjack tables, and by the fire in the window of BurGR – one of the many restaurants owned by Gordon Ramsay – with others in London, Tokyo, Melbourne, and New York City.

I saw a sign for Margaritaville and thought that would be a good place to start and it would lead us on another adventure. The one crosswalk was closed, so we would have to take the other three to get there. This gave us time to look at the yellow-lit Eiffel Tower, watch part of the Bellagio fountain show blocked by trees, and see the moving blue lights on The Cosmopolitan. And place our eyes on the World’s Brightest Light Beam, at 42.3 billion candela, at the Luxor, the second largest hotel in Vegas. But since 2008, to save money and energy, only half of the lights are lit – and it can still be seen for miles. 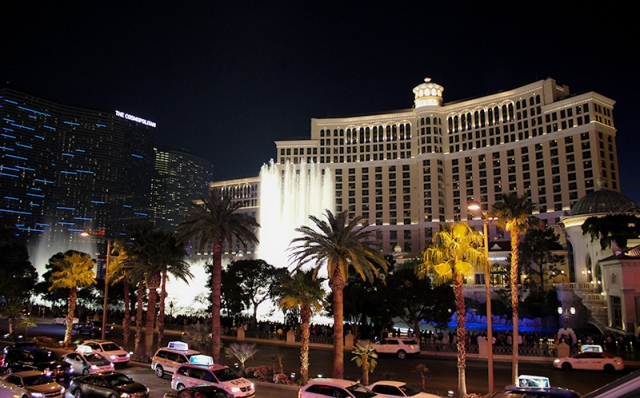 I thought we would start with beers, but we didn’t walk into Beerville, so we ordered from the margarita menu at 8:30 pm. I bought the first round of $10 margaritas and drank a Who’s to Blame. We also ordered free water which is a safe desert requirement with everyone carrying bottles too. People sell them near the escalators outside for a dollar during the day. Our second drink would be thanks to Tom – as would the rest of the drinks for the evening. He bought me a light-up tie and Deanna some flexible green ears that blink and then we joined him and his friends on the patio.

We got to meet the girl selling all the green – horns, ties, sabers, and ears. Tom got some arm art as a parting gift before some of the other people took off. I went inside to help carry out drinks and got a beer while talking to a couple from London and watching the bartender flip bottles. Pack outside we began to slap hands with passing strangers – people in costume, elderly tour groups, backpackers with puppies, men in suits, girls in short dresses, couples with shopping bags and booze, and then Barney – who almost got punched in the face.

That was when we decided to party elsewhere – and wash our hands, but before we could leave an escort wanted to make an offer of service and he was ready to commit. He had plenty of cards to hand out and was willing to show what was hiding under his gray button shirt and gray cotton tank top – a pasty chest with a blue-striped tie. We tried not to laugh in his face as we walked away, but we didn’t make it very far. Clubs and restaurants pay people commission to get bracelets on customers that eventually go in. At the entrance of Carlos’ N Charlie’s we got the blue ones cut off and the red and yellow ones (endless drinks for ladies) put on at 10:45 pm. 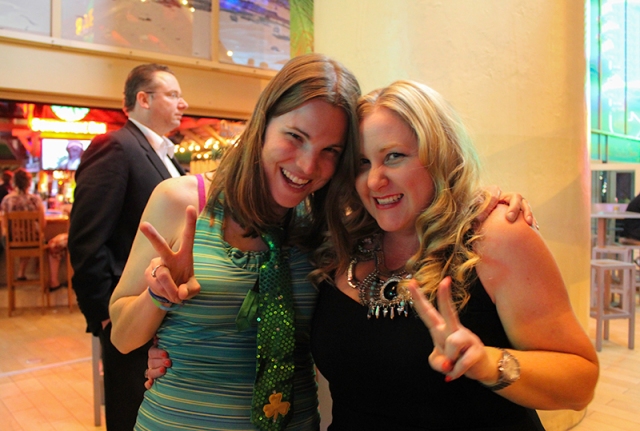 Everyone we met was nice – the manager, the bouncer, the bartender, the waitress – at least that’s who I think they were. At the bar was some girls enjoying a huge plate of nachos that they let us share. Then a girl with a bottle of what I named ‘Mermaid Orgasm’ would make rounds pouring shots in our mouths. I got lost coming back from the bathroom the first time, so every time after I was escorted. Midnight came and went and one in the morning brought dancing – or a bunch of people shaking their bodies on the dance floor – mine with a tan guy, a short person, and a girl with tattoos. 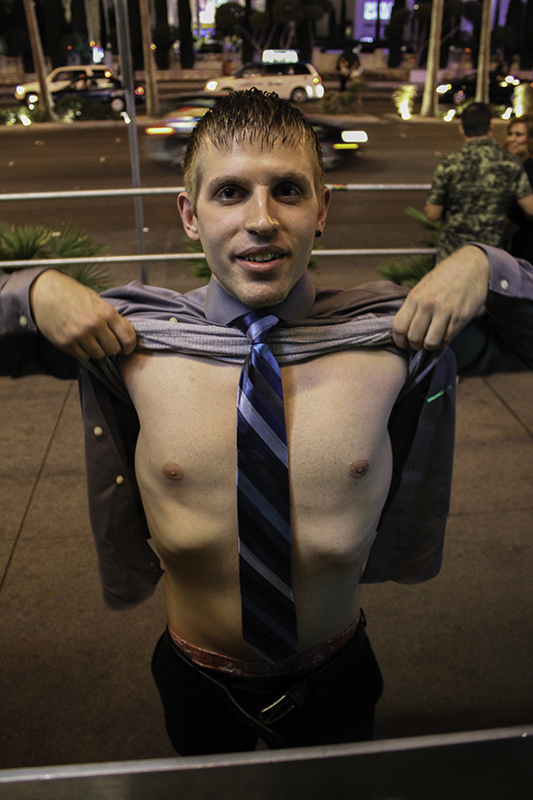 for a good time, call Dan

Deanna and I both lost our drinks, but that didn’t matter. We could order something we didn’t like and get something else – it wasn’t costing us anything. Then someone ordered shots at 1:30 am and that did it for me. I knocked a drink out of a guy’s hand and then took a picture of him when he got a new one. We managed to leave the party behind and make our way to Bonanno NY Pizza in the Flamingo Food Court where we each ate a melting  piece of mushroom pizza for $6.45 each, that at 2:06 in the morning we would claim was the best tasting slice ever. 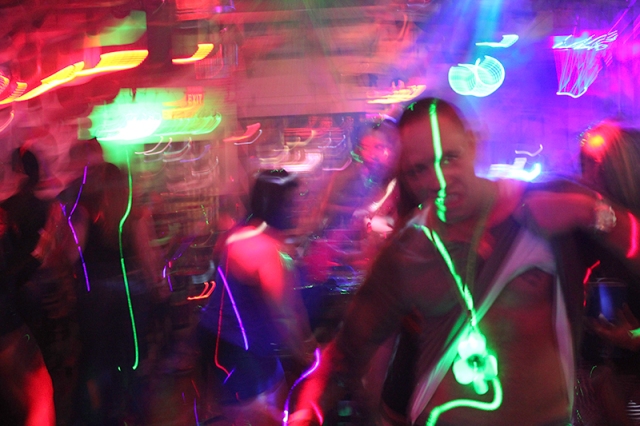 At 2:44 am we are in front of the Bellagio fountain looking at the blue reflection from The Cosmopolitan and at 3:00 am are stumbling by the escalators in the casino with the giant chandelier shining its purple brightness at us. The next stop would be the room. The right thing to do would’ve been to walk the dogs, but there’s no proof of that. What we would remember later is forgetting to visit the airport runway and watching a plane take off over the car or that at some point we got offered a joint that was taped to the bottom of someone’s foot – some things are missed opportunities and others are best left where they don’t concern me.

Did the first day in Vegas go as planned? No. Did we have fun? Yes. Do we remember all of it? Maybe. Will we have just as much fun if not more tomorrow? Of course. Would we love to come back with more friends and bring our mothers? You bet! But that’s just because my mom loves margaritas and with enough of those I’m sure I can talk her into getting a matching tattoo or maybe we will just buy matching dresses or shoes. This is the blurry recollection of my first night in Vegas with my best friend from the second grade – and yes, we grew up in Texas – as you can tell from my cowboy boots – even if I am from San Diego now.

1 Response to To The City of Secrets: Part 2