Though I may have given Caleb crap about the cost of the room, a plate of breakfast with a choice of drink was included. We eat potatoes, toast, and egg, drink some coffee, and save the sausage for the dogs. Our waitress had knuckle tattoos, something about her dogs, and it felt weird to leave her a tip in change – Canadian dollars. We got to see a man in military dress and listen to the local news and weather – forecast: travel and sunshine ahead. And though the world is full of bad stories Canada is sure to share the good too.

I wanted some more fruit for the road and we needed other groceries to help keep our budget low. We find a local Safeway and inside I find hot buttered rum mix on the shelf next to the hot cocoa and hobnobs. Now I know where the band got their namesake. We want to get closer to the Lethbridge Viaduct – the longest and highest trestle bridge of its kind in the world. Part of it passes through Indian Battle Park.

We decide to drive there to get a closer look – if we can find the exit! We have to circle back around as it seems the exit is only on one side of the highway. On our way into the park we notice Fort Whoop-Up National Historic Site – Alberta’s largest and most notorious whisky fort, that doesn’t open until 10:00 am. That will give us time to walk the dogs around. With another stamp to add to the pages we skip getting closer to the bridge, but it seems the park doesn’t unlock the doors exactly at opening time and after ten minutes we give up on waiting as we had other plans anyways.

Also available to see at this hour is the Japanese garden – Nikka Yuko. Inside the office is pottery, lights, woodturnings, dishes, and cookbooks. We were hesitant at first, but another couple came in excited and we quickly bought our tickets at $8 each. It’s a short walk to the entrance where we are greeted at the gate by a girl in a traditional kimono dress. We are given a map of the place, directions are quite easy, but the brochure also gives explanations of the types of plants and their placements. 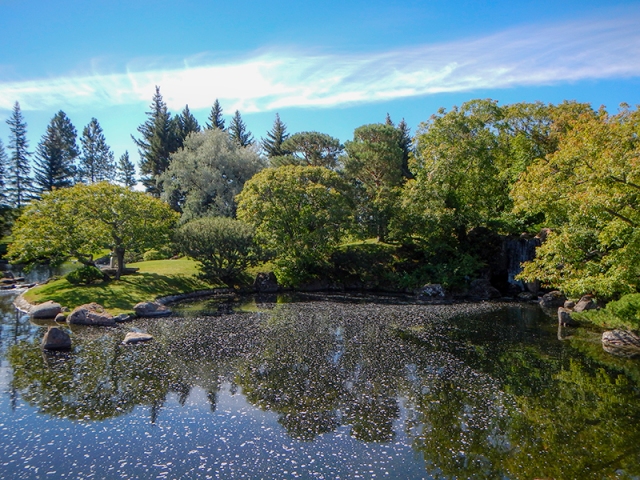 We walk to the left, past a well on rocks covered in shade, to the machiya – traditional wooden townhouse, where we are asked to remove our shoes. Inside are woodblock prints and empty rooms. In the courtyard is a rock garden. We are allowed to stand on a ledge provided to get a better feel of the calm brought on by the relaxing sights and sounds. The rocks here stand for islands and the pebbles are the sea. I wonder what a rock-fall (perhaps similar to a rain stick) would sound like.

Back outside are trees of varying height to give dimension and depth to the fields, rocks that are round and smooth to give rhythm to the water, and still ponds to reflect the growth and never-ending sky. There are shadows and thought-out lines and curves to bring feng shui to the garden and the mind. On the far side of the walking path is a large bell that represents the friendship between Japan and Canada that is over five feet high. We are nervous at first, but decide to hear the ring. We pull back on the log attached to chains and with the release the yard is filled with sound.

We cross over another bridge and then follow a big stone path behind the house to the edge of the large pond. From that point the brochure tells us to turn around and enjoy the garden from another angle. This would be a great place to meditate, read, do yoga, or bird watch. We see others taking pictures, ringing the bell, and enjoying the view of the lake and trees that sit behind the hedge bordering the park. Then we have the option to go back through the machiya, which I do, or simply exit through the gate.

We stay in Lethbridge longer than I had planned. On trying to find our way to the next road we pass a farmer’s market, mostly local Hutterites, and others selling wine, frozen yogurt, and jewelry. We put a quarter in the parking meter that buys us 20 minutes. We share a mango-raspberry yogurt while we finish shopping for blackberries, raspberries, and two types of cheese – cracked pepper and dill Gouda. 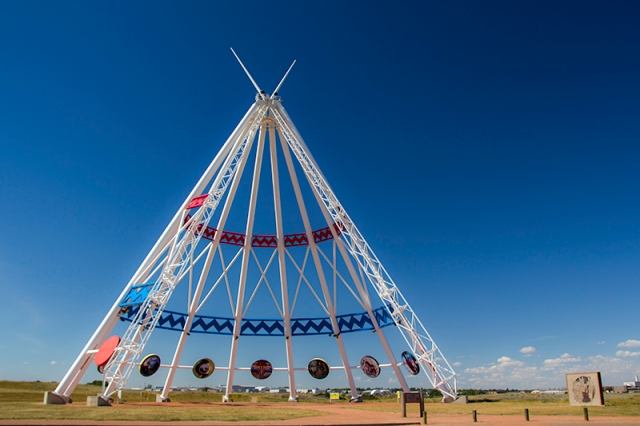 Thirty minutes out of town, near Taber, and Caleb remembers that he left his Nalgene bottle in the fridge of the hotel and we agree that it’s not worth going back for, even if it was a gift from a friend on deployment. There are plenty more just like it. Our next stop is Medicine Hat to see the world’s tallest tepee made of steel. The Saamis Tepee was made for the 1988 Winter Olympics in Calgary and moved to its current location in 1991 where it stands over 20 stories high.

Underneath are signs describing the art-filled circles above. We make our way around the tepee learning about the Blackfoot’s story of how the area was named, the sacredness of the buffalo to provide food and shelter, and how the buffaloes and tepees may be gone from today, but that the Aboriginal continue to influence business, education, and unity.  We appreciate the chance to learn something about the land we are passing through as the dogs enjoy the sunshine and grass in the area provided for them.

In another hour we enter Saskatchewan with Caleb driving for the first time this trip. It seems too soon, but we have traveled the skinny bottom half of Alberta, there are few roads in the middle and none on the top of this providence. Sparky drank lots of water after playing and we had pulled over, after getting gas in Gull Lake, to feed them, but before we could get him out of the backseat he was peeing all over himself and one of the blankets. Nothing to do but shake it out and ride with the windows down.

We arrive in Val Marie after 6:00 pm to a town that looks dusty and deserted. We go to the information center that will give us what we need to stay entertained for the next fifteen hours. South of town is an access road to the trailhead of Eagle Butte, a 2km trail that figure-eights, and 70 Mile Butte, a 5km trail hidden behind the former; in the time it took us to drive down the road we will have forgotten that in our excitement. I park the car at an angle to keep the dogs in the shade, crack the windows, and get out to a crowd of people returning from their hike and getting back on a tour bus.

The brochure says the views from the top are spectacular at sunset. We ask two hikers how long it took them so we know what pace to keep. They assure us the up will be easy enough but to watch out as part of the trail got washed out after the last rain. We thank them and skip off to the left. We were enjoying ourselves and came across a steamroller that Caleb thought would be fun to ride, but I wouldn’t let him. It was shortly after this, when the bus was just dirt in the distance and the signs all had eagles on them, that I felt lost.

We backtracked to the car. Caleb grabbed the map. We had been on the eagle trail. This time we went right, over a yellow bridge, and were on our way to the top. There are flowers we haven’t seen before, dried dirt chunks that remind me of a picture I’ve got at home, and a skinny path with bright yellow plastic markers – everything one might expect on a trail in mid-Saskatchewan. The temperature is nice, the climb not too steep, a balance of light and shade, but not enough clouds in the sky to be contrasted in my photos. 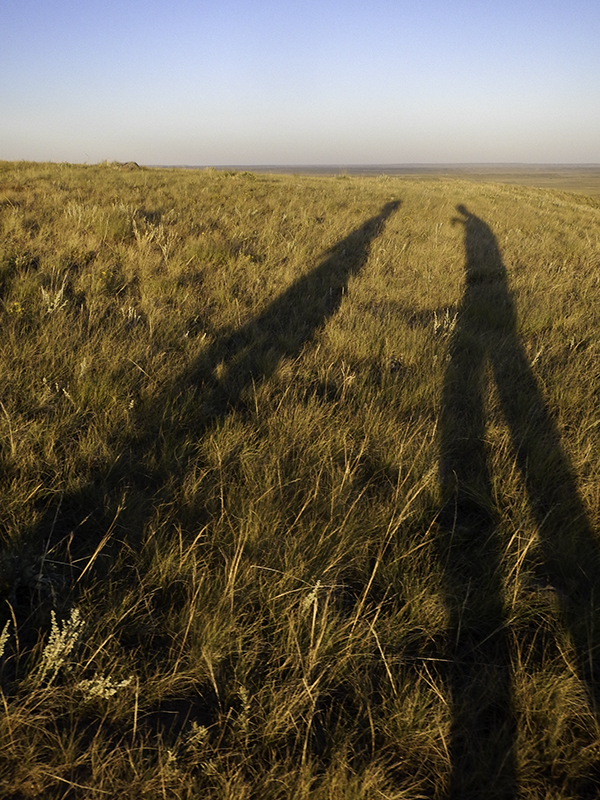 I take some panoramic shots, first of the trip, and then one of us. I may have missed other opportunities to include more of the landscape in one photo, but I’m making the most of this moment on the highest point, this side of the park, with Caleb. And then… the mosquitoes come. And the trail is a mess like the lady said it would be and there are trees on sandy hills and lichen on rocks to look at while enjoying the sunset and trying to get back to the car without looking like a kid with chicken pox from all the thirsty bugs.

We decide to take a tour of the town and figure out where we are sleeping for the night. The up-side: seeing the beautiful moon over the field on the backside of town. The down-side: walking into the only open place in town and feeling awkward. The hotel café stays open to feed the street workers buffet style. There is an old convent that got renovated into a nine bedroom inn with restaurant. We pass it on the way to the park. We’ve decided to use one of the many backcountry campsites available.

The pamphlet says to pull off-road and set up out of sight. It’s starting to get dark, or so we think. It’s actually the sky filling up with clouds of mosquitoes. We drive 5.5 miles out of town. I know this because we had to turn around. Caleb said stop. He got out with tent in hand and within two minutes was racing to get back in the car with tent parts flying. He said we could camp in town where we passed a cozy tent and I agreed. Turns out there is a large campsite in town and we were one of many to make the decision to sleep there.

Caleb composes himself from the blood-thirsty attack of earlier by coating himself in a layer of deet. Once he feels safe he grabs the tent bag and begins to set up, but soon realizes he forgot the tent stakes where he was so quick to leave them behind and save himself. We choose to leave the dogs in the tent – either they will hold it down and claim our spot or they will be suffocated to death upon our return. We must’ve picked a recognizable place because it was a quick trip and soon we are back in Val Marie.