We get a late start this morning and head down the 93 south. We drive past the Columbia River – the one that flows into the Pacific Ocean via Astoria, Oregon over a 1,200 mile  journey, and turn into Canal Flats to visit the headwaters. The road to the parking lot seems to be at the back of town, but is located near some nice houses. We wander around on the gravel among the trees and mosquitoes for a bit.

We see a sign that offers a compelling reason to pull over, Fort Steele ahead. Pets aren’t allowed inside to visit the admissions desk, but have their own door to enter the historic side of the fence. It’s a good thing they get in free, but we decide to skip the attraction and just visit the main building – a reconstruction of the brewing company that was built here in 1898, though the main office was moved to nearby Fernie in 1901. Now they sell tea, spices, cake, sandwiches, and soda in the café; and clothes, jewelry, books, and trinkets on the other side.

We learned that, as of February 2013, the Royal Canadian Mint stopped distributing pennies. They were phased out as costing more to make than they were worth and can now be used as decorated lotto scratchers, donated to charity, or returned to the bank to be melted down. Cash transactions will be rounded up or down to account for the change. It may seem that the States are behind in their financial decisions, but more so than we thought. Australia phased out their pennies in 1964 and, along with other countries, are starting to phase out nickels and introduce the use of polymer bills that can withstand more handling while in circulation. 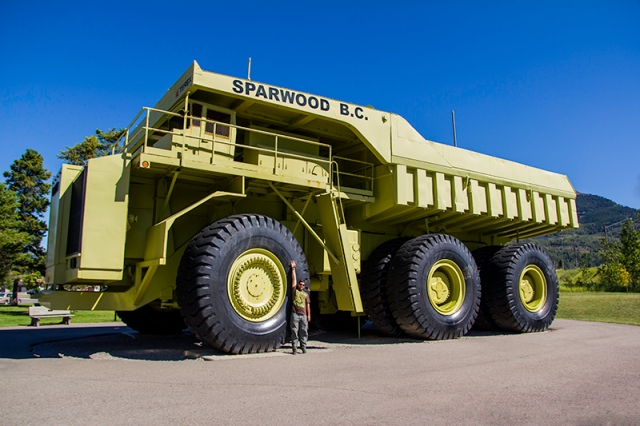 We order a Johnny Cake from the café; the recipe was discovered in Sam Steele’s journal, the namesake of the town for the Superintendent that solved land ownership issues in 1887. It’s a piece of cornbread served with butter and syrup – not the best I’ve ever had. I prefer mine with milk or peppers, but it’s another experience nonetheless. Outside they have compressed air locomotives that were used in coal mines until the 60’s when they were replaced with diesel. Also outside is the origin of horsepower – a few Clydesdales maneuvering in the field to avoid the sprinkler system during their brunch.

The road takes us south and north, but we are heading west, soon to leave the southern province of few roads. On the way into Sparwood we pass a yellow Cat truck with wheels as tall as the SUV in front of us, but that’s nothing compared to what awaits us in town – the Titan 33-19, the biggest truck in the world! From draft to completion in six years, the truck was sold to Kaiser Steel who used it in southern California for four years before moving it to a mine near its current location in 1978.

We were busy reading about the history of the truck when we hear this old guy calling out to someone. We didn’t realize it was us and I totally ignored him when I did. He was saying, “hey, you” and “are you deaf!?” I very well might be and that’s no way to treat visitors. I don’t want to hear you brag about how you drove the truck or your pappy did or whatnot after the attitude you gave me you can take your little wheeled cart and carry your ass back inside and wait for the non-deaf to approach you.

On the other side of the truck I get Caleb to pose near the wheel. He stands on his tippy toes with his hand stretched high totaling a reach of 7.5 feet. It would take the third Caleb’s head to reach the top of the truck while not in the dumping position. This would be our last stop in British Columbia. We would be in Alberta before 1:00 pm where they ask that we not bring intact deer carcasses or wood with bark into the province as both spread disease.

The municipality of Crowsnest Pass is a collective of cities and towns that lost their population levels when the mines closed down. One of these old towns, Frank, saw a boom after a 90 million ton landslide in 1903. It joined the other communities in 1979 and the Frank Slide draws over 100 thousand visitors a year – us being two of them unknowingly to the Leitch Collieries Provincial Historic Site after stopping at a shop that sells tea and homemade Asian noodles with carrots, peppers, and onions – good food for the price.

Caleb’s goal today was to make it to Waterton Lakes National Park – the Canadian side of Glacier NP in Montana, and we had a park pass that allowed us to visit until 4:00 pm. This is the only place to also be a UNESCO World Heritage Site, International Peace Park, and a Biosphere Reserve. We parked in the shade at the visitor center and walked up the drive to the Prince of Wales Hotel built in 1927. It took 14 years to get the land leased from the government and the supplies had to be carried the last 25 miles by mule team.

The hotel is nice to look at, but pricey to stay at, or have tea for that matter which will cost an adult $30 for a teabag in one of the hotels porcelain cups. There are seven floors and six of them contain the 86 rooms that with high winds can sway slightly. It’s beautiful and historic and was built to attract people north across the border during prohibition, but it’s the view outside that brought me and it’s the wind that will almost blow me away. I enjoy the view from the ground and from the sixth floor balcony.

At the end of the main road is a townsite and Upper Waterton Lake that welcomes puppy paws and hands alike. The water is cool and some kids are playing in it. Sparky is more interested in playing with the rocks. There’s a parking lot in-between lakes Middle Waterton and Linnet. We almost walked the perimeter of the former, but caught ourselves after a while and hiked along the edge of the latter. We see running quail, tall yellow flowers, flying red bugs, big brown mushrooms, purple dying thistle, a garter snake, and paddle boats. We’d have gone for a ride had there been someone to rent them out.

This short hike took us past our ticketed time. Part of me felt guilty and the other half wanted to stay longer. Within the park boundary is a short drive that takes visitors through Buffalo Paddock – a small fenced in area with a loop road that shows less than 20 bison in their natural setting – just not allowed to go far so they don’t interrupt the rest of the park traffic, and probably so they don’t get hit by them either.

view from the Prince of Wales Hotel – by Caleb

Caleb’s dad recommended we stop at the NW MP (North-West Mounted Police) site in Fort Macleod, but we got there after hours and could only see buildings behind a fence and from the roadside. This force would join with the Dominion Police in 1920 to become the current Royal Canadian Mounted Police – that we saw none of either. We were also late to Head-Smashed-In Buffalo Jump World Heritage Site – a very descriptively named place for the cliff that the Plains People chased the bison over to kill them.

And for the third closed place today – the Lethbridge Visitor Center that luckily has some brochures outside. Inside one is a small map with 11 accommodations listed. We’ll skip the ones we already know to be expensive and go door-to-door with the rest. The first place wanted $200 for a basic room. The map seemed to only show things below Hwy 3 and between the north and south clump of squares and circles on the map we stopped at the Superlodge. Caleb said they were the cheapest in town – and they would’ve been had he not paid $15 for a non-smoking room and the $10 pet fee for a total of $100.43.

We’re pizza addicts so we find a place nearby, Two Guys & A Pizza Place. We are quickly seated at a large wooden table with an extensive drink menu (description for every beer) and a dinner menu. We order a perogy pizza (mashed potatoes, burnt green onions, fakin’ bits, and ranch) and a California veg (tomatoes, onions, spinach, with jalapenos added).  We try two IPAs and a Rosmarinus Aromatic Ale – surprisingly delicious. There are pictures near the restroom of the place being rebuilt from the inside out.

The meal is great and the atmosphere enjoyable until it’s time to get our check and a table of three flirty guys walk in to distract our waitress. We waited for the to-go box and the bill, but I grew inpatient watching her at their table attempting to seduce a large tip out of them. As we walked to the register to pay she quickly joined us. She rang us up, but the percentage of her tip dropped drastically for her change in service. No big deal though. We got fed, will have tasty leftovers, and have a room with a shower waiting on us.