Posted on October 23, 2012 by TheJessicaness 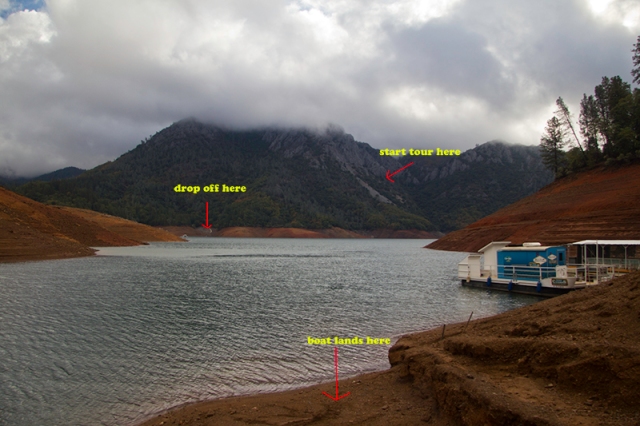 We sleep in. The trees help keep the sun from reaching our tent – usually our last alarm if the snooze button was hit or forgotten in the car. The tent was moist inside and out. It had rained all night. The campsite was 30 miles from our morning destination – Lake Shasta Caverns located down a nice road with a “trailer” yacht campsite along the way.

We walk anxiously inside at 9:30 am and find out the first tour of the morning leaves in 30 minutes. Tickets are $24 each. I’m about to decline, but with the ticket comes a boat ride with informative Eric and a bus ride and cave tour by Katie full of jokes and history. We are joined by six other people – a non-talkative couple and two couples that were talking excitedly in another language. The bus ride goes up a 17% grade. Trains can handle 2% and semis up to 8% before their brakes catch on fire.

There are a lot of steps in this cave and plenty left to be explored that hasn’t been found yet. Bears are a popular sight around here, but we will have to be satisfied with a cell phone pic of a fresh paw print that the employees found this morning. We learned that the Grizzly bear – found on California’s state flag has not had a supportable habitat in the state since the 60s. Perhaps it’s just a good reminder of the damage that people have caused to the environment and will help us to do our part to preserve what we have left.

Next stop, Shasta State Historic Park to learn about the people who went from being miners to merchants and how they eventually built their shops out of bricks to help prevent total destruction in fires – a popular disaster still common today. Then we went to Whiskeytown NRA to learn a little more. The dogs were allowed on the trail and joined us on a 1.7 mile hike to Whiskeytown Falls at a height of 220 feet.

a section of the falls

Piggy fell off a bridge, but with her leash on I was able to keep her dry. On the way back down the trail I saw a flash of yellow fur jump up a hill and the dogs wanted to chase after it. I’m not one to stay too long around possible mountain lions but I did take a picture of his paw prints in the dirt… and was secretly hoping to get a photo of one full after a meal. We would only see a gray shape in the bushes for the rest of our return.

Caleb felt like another night of pizza and beer and found Pete’s restaurant in Sacramento to be a popular choice. We joined the trivia night half way through and finished far from winning. We learned that monarch butterflies migrate to the eucalyptus trees in Pacific Grove. We talked with Rachel, our friendly sports-fan bartender; Steve, the college student studying for his psychology exam; and Mike, the guy that had trouble deciding what to put where on his pizza. We talked some politics and then called it a night.

1 Response to Piggy, Pete, and Politics