Oh the Places We’ll Go: When I Get my Bicycle Back

Posted on April 9, 2012 by TheJessicaness 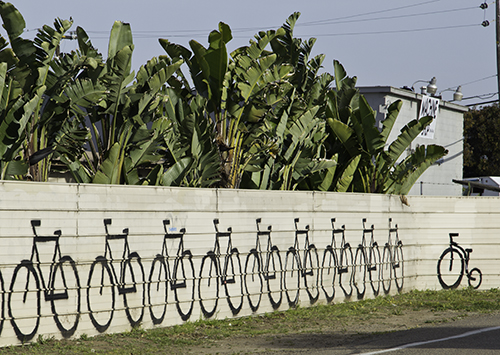 We went out riding the other night and my rear brakes were rubbing against my wheel, so I disconnected them. I was having a hard time switching gears, but toughed it out uphill. Caleb found a bike shop on Thursday that said we could get my bike back on Saturday. I was excited at the time to get a more ride-able bike in return, but had easily forgotten our weekend bike excursion plans. As Saturday morning began to pass us by I wondered what time the shop opened – noon. I was almost devastated.

I passed the day eating, reading, playing with the dogs in the backyard, and fantasizing about all the southern California sights I was missing out on. Caleb called at 5pm, they close at 6pm, and they said the bike was ready. We took my bike to Ocean Bicycles and Caleb was not completely satisfied with what they said was included in a tune-up and the results of said tune-up. I am a ‘girl-driver’ in many aspects; I can drive to places, but can’t tell you how to get there. I can attempt to ride my bike cross-country, but can’t tell you anything about what parts make up my bike. I do know how to change a tire though, and switch gears!

We arrived home and I hopped on my bike. I disconnected the brakes again – guess they didn’t fix that problem, switched my gears easily, and we headed south towards the border parks. I wanted to make it home before dark so we just enjoyed the route this time and will return to actually see more of the parks themselves. This meant that my bike was good enough and we could still go north on Sunday – woo hoo!

We woke early as usual, which is sleeping in for Caleb on the weekend, and brought breakfast snacks with us to get on the road sooner. This time we took the Bayshore Bikeway on the east side of the bay. I had it planned that we would arrive in Balboa Park at 9:30am, visit two museum exhibits when they open at 10am, and then ride three more miles to Old Town for lunch. I’m a slow rider that likes to take pictures on a slow bike; I should’ve known it was going to take us longer.

We got to the Natural History Museum after 10:30am to see their ‘shiny-stuff’ exhibit – according to Caleb. It might’ve confused people into thinking it was big shiny jewelry, but it was a gem display – a piece of Earth’s art in one of its many facets. The online article mentioned how the earth forms many things, the Grand Canyon, and wears them away. These gems are a part of that process – wind, water, fire, dirt, and scientific stuff dealing with elements and their formations when they come together.

There was some jewelry, but I would choose to wear the heavy rock beside it knowing that I didn’t spoil its natural design. Nature is so pretty in itself that it overwhelms people in its size, so they feel compelled to make it more manageable – and then sell it. This exhibit gave me a deeper appreciation for shades of purple, blue, orange, black, green, red; for topaz, emerald, turquoise, ruby, onyx, tourmaline, opal, and pearl – just to name a few. I got to see silver and copper in their pure form. 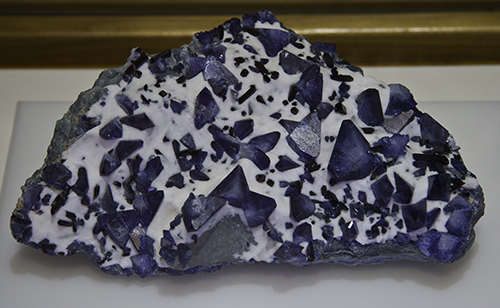 On our way downstairs, to the gem exhibit, we stopped in awe of some dinosaur fossils. I remember a day when I thought dinosaurs were as real as unicorns and made up for Jurassic Park movies. To think that these beautiful and amazing creatures actually existed just as the Australopithecus before us and the Mayan after them. It inspires me to want to appreciate every molecule of being on Earth at the same time before the day comes when new archeologists will be digging up the remnants of Homo sapiens. How much longer do we have before our tail bones and water bowls, and plastic bags, are the only thing left linking us to this impressive place?

So after pondering the before-us life and the afterlife we went downstairs. Visitors can enter the south-side second floor or the north-side first floor and the gems were below the first. On the first floor we noticed an overwhelming amount of people dressed like it was 1912. I didn’t realize the Titanic exhibit was at this museum, and I thought it didn’t start until May – oops. One of the dressed-up men was able to tell us that they are part of a historical costume society – one that has spent the weekend at the theater, on the dance floor, chowing down at the diner, and now at the museum. He seemed thrilled, and ready for a nap.

Back on the second floor we admire the larger-than-life animals. It seems all natural history museums have some large vertebrate displayed – dinosaur, elephant, or shark. Here we learn that the large 15-foot sharks of today are dwarfs in comparison to their ancestors that could play in the prequel Jaws: Size Before the Food Shortage. Whales, in my mind, are somewhat like dinosaurs in that they are extra-large creatures that fascinate me. The difference being – I might actually see a living whale one day swimming in the wild, and not while on a cruise-ship. The idea of seeing their eyeball in person terrifies and excites me at the same time.

We had just started to imagine the saber-tooth cat’s teeth, as they dropped their lower jaw 90 degrees, breaking through the skin of some large animal or a smaller fuzzy critter getting stuck on its teeth and the cat using his lower jaw to work the animal off its teeth. Wonder if they ever bit their lip? Then we hear a museum guide ask out loud if anyone knows where the La Brea Tar Pits are. I answer, “near the LACMA.” This is enough to get his full attention on us and he tells us more about the cat and the pits and I think of how I want to return. Then he begins to tell us about his arrival in California back in 1940 or 1960, driving down the road when he is faced with this pterodactyl size bird in the road.

He goes on to tell us how he was intimidated and hoped the bird would not take his car in place of what was left of its lunch in the road. Then he points to a display case we have yet to reach and asks us what we think its defining character is. Caleb and I are thinking the 10 foot wingspan, but the guy replies that it’s the bald red-head on the vulture – a California Condor. He explains to us that if the bird had feathers where it sticks its head in diseased corpses it would be more likely to die of contamination; with bald skin the blood and bile can dry and fall off. I am all giddy as I thank him for this bit of information – I love learning new things!

The museum’s third floor is dedicated to skulls ranging from the sandstone night zizard to a human to a rhinoceros. It’s amazing to see details in the cartilage, compare similarities, and to visualize all those hungry teeth at work. There is a case with some bones with the flesh still on. We got to watch as hungry maggots help the scientists reveal the cleaner, less hairy with skin falling off, history below. The fourth floor is reserved for pictures I could’ve taken – at the San Diego Zoo, pictures I have one in a million chance of taking – a lion with a wildebeest head in the wild, and pictures with high possibility of me getting a good shot – a macro of a bumblebee. 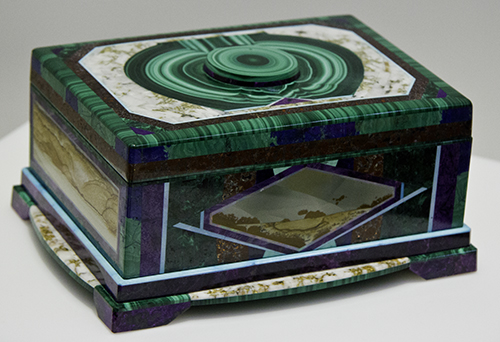 “A livelier emerald twinkles in the grass, a purer sapphire melts into the sea.” – Alfred Lord Tennyson

So much for the other museum. Their special exhibit is available until Apr 15 so we can come back. After hours at this museum it is time for lunch. We head north to Cafe Coyote where the old ladies make tortillas out front. We are able to lock our bikes up, turn, and walk in to be seated. Caleb was told by a friend to visit this place three years ago when we were here last. I remember the tortillas, my large margarita, and a filling meal. This time we got a rotten tomato on our salad that comes with the veggie combo. I felt like we were at the Panda Express version of Mexican food.

Our server had a full house during the midday rush and I had to order the tortillas twice – they are the reason we came. Perhaps next time I will make a meal of their tortillas and salsa and try some dessert, but this is a place better left for people with expensive tequila taste and an appetite for dead animals. We enjoyed the scenery, the aura, the getting lost temporarily more than once, the graffiti, the people, the weather, the exercise, the art, the learning about the world around us – past and present.

What we didn’t enjoy were the sore bums after 35 miles of riding in jeans; perhaps next time it will be back to the tights! Even so, we have started walking the dogs to ensure their bums are on a poop-a-lot schedule, and walked them 2.6 miles before a dinner of biscuits with leftovers. After a long exciting day, all that was left to do was relax, eat more, watch YouTube, and rant on my blog while helping the husband with his random Facebook inquiries. And then wait for him to comment on my blog – whether online or in person.

7 Responses to Oh the Places We’ll Go: When I Get my Bicycle Back