Sweatin on a Schwinn

Posted on July 3, 2011 by TheJessicaness

Certain people prefer to drive cars (Hooptie or Hyundai); mine is one in the same–junk. Others drive trucks (Monster or Chevy Love). And still others drive mini vans or hybrids. According to my friend, Steve, people either drive Kia’s, which of course he does not, or they drive a Ford truck. But me, I ride this green and white Schwinn to school and back 2-5 days a week depending on my class schedule. We started out with ten-mile days and an old MP3 player. I got the shiny thick chain to secure my bike wherever we go. I bought a basket to tote my dog, but he is not Toto, and he was having none of that. I took the basket off while going to school after some girl jumped off the bus while I had my bike chained near the bus stop and accused me of stealing her bike. Now I park by the security office.

We moved five miles away from the school in the other direction and traffic seemed to get more difficult to deal with. Whether I ride in the bike lane or on the sidewalk, some motorists in Jacksonville don’t seem to respect my rights. For this, my husband got me an emergency signal horn that people on boats use. I mainly have to use it on retired folk that appear to be napping in the intersection. It does me and the driver behind them a favor. But that doesn’t rule out people who prefer not to stop at stop signs or red lights either. 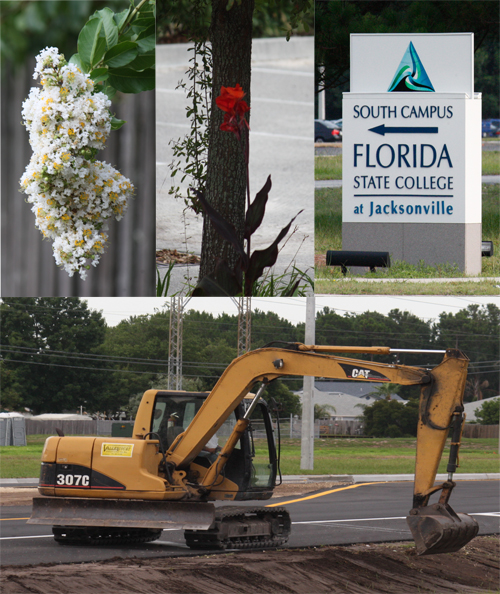 We moved again and this time the one way trip is a little over seven miles. I had to buy a new MP3 player once the old one stopped letting me adjust the volume or turn it off. We have been through some flat tires and a shower of rain or two together. I wouldn’t trade the closeness with my surroundings that I get to enjoy while not being locked away in an average size vehicle that weighs 2,500 pounds. Me and my bike together weigh less than 200 pounds without the weight of my book-bag, sometimes reaching 13-17 pounds.

I get to see a lot of things that most people would never notice even if they happened to walk by or while they sit at a red light. Mostly I see construction and litter, but this inspired me to adopt-a-highway and for two years I get to see a sign with me and Caleb’s name on it. Other things I get to see and smell is: fresh-cut grass (Jacksonville is all about foregoing other necessities to ensure they have performed the most landscaping maintenance on their highways and in their apartment complexes in the entire Southeast region), flowers in bloom, singing birds, dead birds (sometimes I feel that I can see more wildlife splattered on the road with crazy drivers than I can in the peaceful wild while tip-toeing around trying to get one decent photo), turtles swimming, rabbits eating, broken fences, bags that grow on trees, tire pieces that have gotten tired of being on someone’s Mercedes, police officers not doing their job, sprinklers on during the wrong time, joggers and dog walkers, a vulture (the actual bird), bugs pollinating flowers, graffiti (there are some light posts with the word ‘Copy’ on them and the last one has a stenciled cat under the word Copy), people riding their bike with no hands on their handlebars, and a guy in a dog outfit outside a pet care center (that was soon replaced with a stick to hold up the outfit as the wearer deemed it too hot to act like a dog in such Florida humidity.

Biking gives me the ability to have an extra slice of key lime pie; it is free and easy exercise that is easier on the legs and lungs than running. It takes less out of my wallet than my car that gets an average of 30 miles to the gallon. Riding can reduce stress as well as traffic jams that are a party for exhaust fumes. I am helping people with asthma and the ozone while getting better parking. I will finish my A.A. Degree in August, but the relationship me and my Schwinn have is far from over. From the famed author and philosopher, Iris Murdoch, “The bicycle is the most civilized conveyance known to man. Other forms of transport grow daily more nightmarish. Only the bicycle remains pure in heart.”