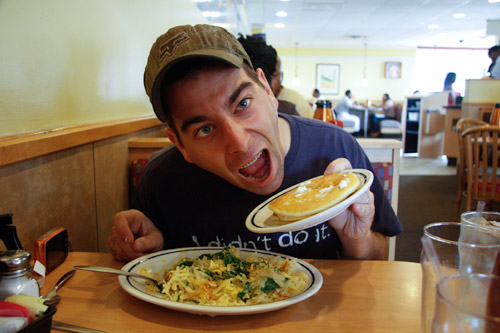 This was a late breakfast at IHOP as we had to wait for Caleb to go to work and get a piece of paper with a signature on it giving him a 4-day weekend. When he got home I went to pick up the 4-layer red velvet cake with cream cheese icing from the bakery at Publix across the street. We would later decide that vanilla bean ice cream goes best with red velvet cake. ( I did see the small fancy ice creams in a new flavor..red velvet. Will have to try that soon.) After I took this picture, Caleb slid the pancakes off the plate and into his mouth. He daintily ate the other plate’s contents with a napkin in his collar and a fork for plate to mouth transfer.

For his birthday, he asked to see me with short hair after knowing me for six years. We went to SuperCuts where the nice barber proceeded to cut my hairs in half. Then we spent the afternoon driving to different bicycle shops until we found him a new gray Schwinn. We relaxed at home for a bit before leaving at 7:00pm for dinner. We planned on going to, “that Indian place on Baymeadows.” The restaurant, Flavors, had moved across the street so we decided to try their competition, 5th Element, next door. The appetizer was tasty and we tried jalapeño naan bread. The rest of the meal was not as flavorful as we hoped. We had cake and ice cream when we got home.