Posted on November 17, 2018 by TheJessicaness

We were in separate cars, me following Dad down the highway at 8 am, because I had agreed to join him and Caroline on their trip to Los Angeles. They were going a day early to be ready for their concert at the Walt Disney Concert Hall on Sunday afternoon. I would’ve preferred to set the cruise control and just drive, but Dad would rather do it differently, and even though I eventually passed them we were able to meet off Exit 144 in California for a roadside snack.

They got to the restaurant first while I got fuel and thought they’d order the small plate of carne asada fries. We needed 2-3 more people to help us eat the pile of food that was served for just $10. We still had about two hours before getting into LA. We would meet at the parking garage near FIDM (Fashion Institute of Design & Merchandising) and walk to explore the small exhibit of a Napoleonic court gown and new ways of wearing jeans. 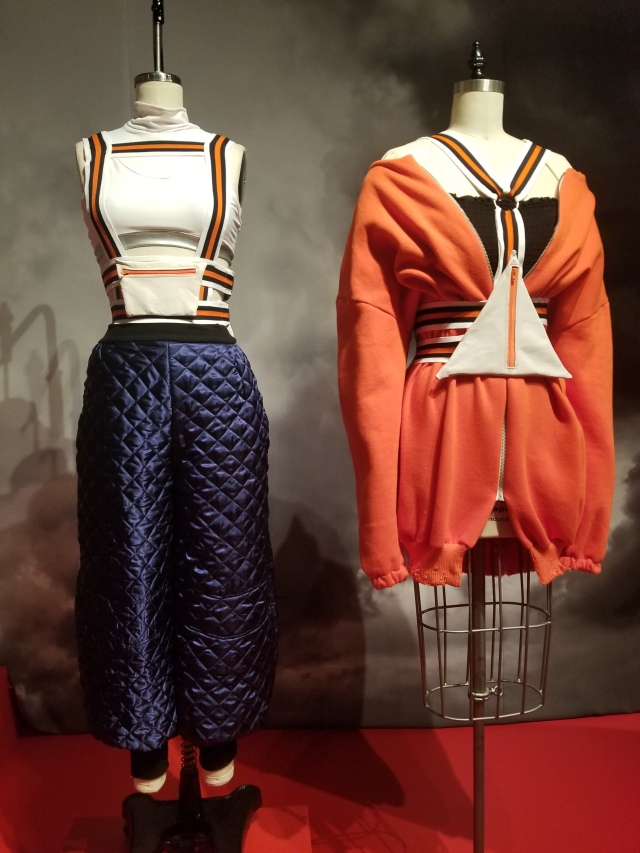 We walk around downtown for two hours exploring the streets that Dad used to wander in his youth with a camera and curiosity at the same odd people found today – filming, sleeping, screaming, and dancing, etc. We take the Angels Flight funicular railway, all 298 feet of it, down to South Hill Street. The track was opened in 1901 and has been closed from ’69 to ’96 for redevelopment, 2001 to ’10 for a fatal injury, June to July 2011 for wheel replacement, and 2013 to ’17 for a minor derailment. The original cars, Olivet and Sinai, are still in use today.

Across the street is the Grand Central Market, a gathering hub for restaurants since 1917, and a place where plenty of people come to eat; which is why Dad finds it difficult to believe that I have not been here before. I let him know that I’ve spent more time exploring the beaches and mountains of LA county and have probably seen more of downtown San Francisco than I have of a city that is only a two-hour drive, on a good day, away from home. I should change that. 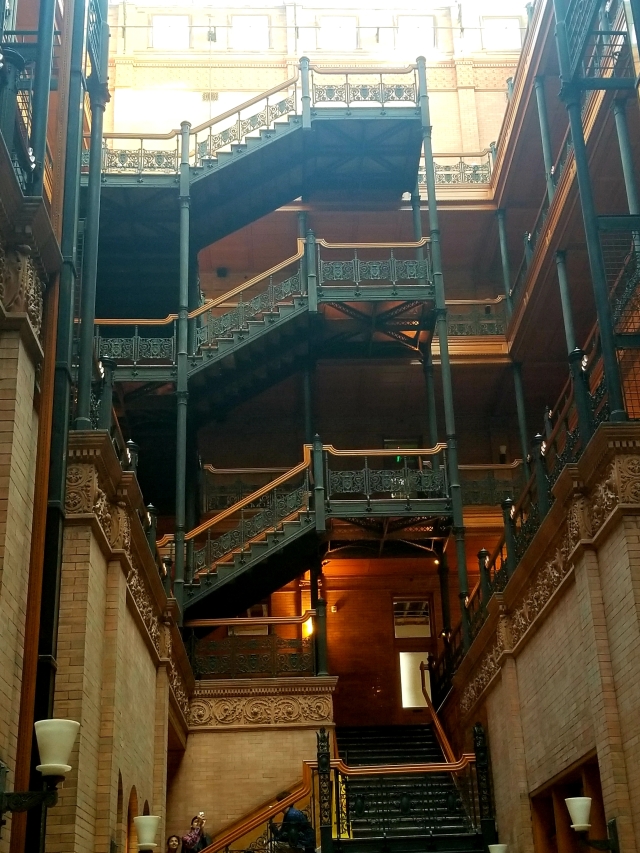 The Bradbury Building is open and inside I learn that it was built in 1893 and designed by George Wyman and Sumner Hunt. The film Blade Runner from 1982 is the advertised attraction here, but this beautiful landmark with a skylit atrium at five-stories high has provided the backdrop for over 30 movies since 1942 and remains the oldest commercial building in Los Angeles.

Another historical landmark, the Million Dollar Theater, opened with the premiere of The Silent Man in 1918 as one of the earliest and largest cinemas with over 2,300 seats to include Charlie Chaplin, Mary Pickford, and Douglas Fairbanks, Sr. as guests. The detailed stucco design was based on the Churrigueresque style popular in Spain until 1750 and the façade of bison heads and girls strumming instruments was also a Spanish influence representing the arts. 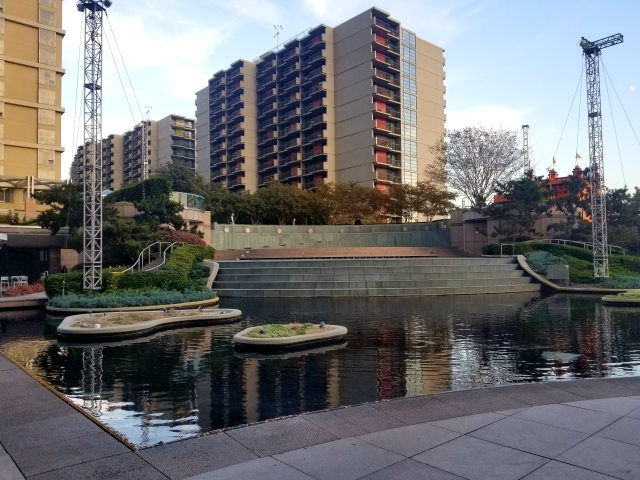 We drove to Guelaguetza Restaurante where they serve Oaxacan fare and are known for their varieties of mole, but that wasn’t the focus of tonight’s menu. I took Sparky out for a three-second walk while the car was parked via valet which is a great deal for $5 and two hours of parking in Koreatown since I could’ve spent 30 minutes looking for a $16 spot over a half mile away.

Caroline and I ordered horchata con tuna (not the fish, but with pieces of prickly pear and nuts) to sip on while we waited on our appetizer of chapulines — sautéed grasshoppers with jalapeños, onions, and tomatoes. They come in two taco shell bowls, generously over full, with a side of Oaxacan cheese, sliced avocados, and warm tortillas wrapped in groups of four. Caroline wants to be embarrassed for playing the touristy role as Dad takes out his phone flashlight to capture this moment with his other camera.

I take one masa flour (main ingredient hominy) tortilla and wait my turn to grab a spoonful of tiny Sphenarium, the young of the most ancient, from the Triassic period, group of chewing herbivorous insects, that will help provide my protein intake for the evening. I take a bite and try not to focus on the baby bugs or their legs getting stuck in my teeth as I mentally agree to finish this handheld taco. Dad wants to know if I’ll have more while Caroline is busy spooning them into her mouth.

Next to arrive is the sampler platter with cups of mole: negro, rojo, coloradito, and estofado; all with shredded chicken and served with two cups of rice and a large 14″ tortilla. I will put a scoop of each on my small plate and try a slice of the tlayuda tortilla, an Oaxacan-style pizza, topped with a pork-rind paste (pig skin), black bean paste, queso fresco (raw cow’s milk), cabbage, tasajo (thinly sliced grilled beef), cecina (dry, salted beef), chorizo (pork meat and fat), and Oaxaca cheese. This will be the most meat and dairy I’ve had together in a long time, but I’m caught up in the moment.

The band had started and on Saturday nights it’s three guys on marimba with a percussionist and a vocalist that add to the background ambiance without drowning out the voices of the people you’re sitting with. The night was young as we had yet to try the Oaxaca dessert sampler of a blueberry tamale, rice pudding, cheese flan, and nicuatole (corn gelatin with milk and walnuts). I took my coffee to go at 7 pm so that I could get on the road and they could catch up with a local friend.

I stopped before getting on the highway to let Sparky out and am thankful for the coffee cup, as I poured the beverage into my reusable tumbler, as a post-dinner catcher. I’m open to trying new things, but this meal didn’t agree with me and I would spend half the ride home feeling their legs on my tongue again. The thought of it, along with the smell that had Sparky interested, was gross enough and I was sick again when I got home at 9 pm. I showered and washed the dog and went to bed around 11.