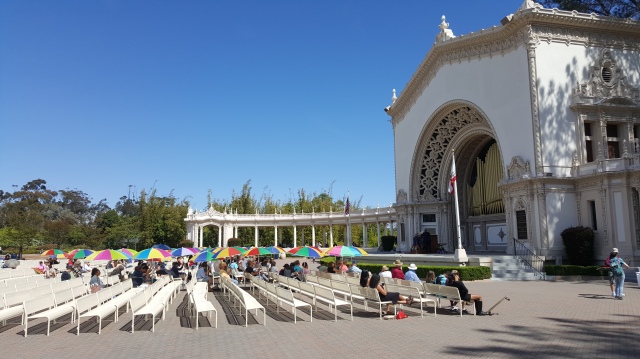 I went to the Spreckels Organ Pavilion in Balboa Park, home to the largest outdoor organ consisting of over 5,000 pipes, some 32 feet long and comprising 80 ranks. This organ was donated from the Spreckels brothers in 1915 for the Panama-California Expo after being built in Connecticut. I attended on Easter Sunday and was attracted to the warm-up as were passersby. Jared Jacobson, a former Civic Organist from 1978 to 1985 playing weekly concerts, has returned for his 358th opportunity to play this grand organ.

The audience gets a new perspective when the stage door rises. The stage is small in comparison to the space needed for the pipes in the 75-foot tall pavilion. There are trees surrounding the seating courtyard and some clouds just above them. I’m sat under the shaded awning overlooking the 2,500 seats on simple metal benches, arranged in five columns and 27 rows. Above me are a bunch of small incandescent bulbs, over 1,600 total, that are used at night to bring a different ambience to this wonderful place. 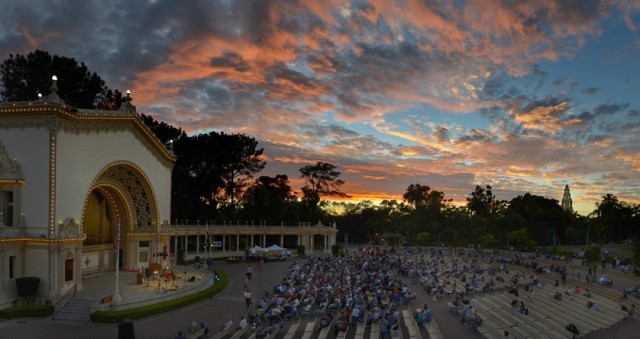 There are 250 people sat around me, and for those willing to part with $2, are sitting with a bright rainbow umbrella to protect them from the sun during the show. Two potted white-flowered plants are placed on the organ’s sides once it’s rolled out closer to the audience, near the California and American flags on stage. This pavilion is surrounded by pedestrian-heavy areas and a large parking lot that is full when I walk through. It’s surprisingly quiet and peaceful minus the three airplanes that fly over. The church bells sound on the hour and the architecture brings the place together.

Jared, in his blue jacket and khaki slacks, is accompanied on stage by his page turner dressed in a black suit and standing sideways to the audience, helping to smooth transitions. Jared sounds happy to be here and to share this moment with us. He shares the emotions of the piece and some of its history before playing each one. I’m taken aback by the simplicity of the wood and the amount of keys and pedals that I can see from a distance. I am even more impressed once Jared’s fingers begin to move with profound precision. 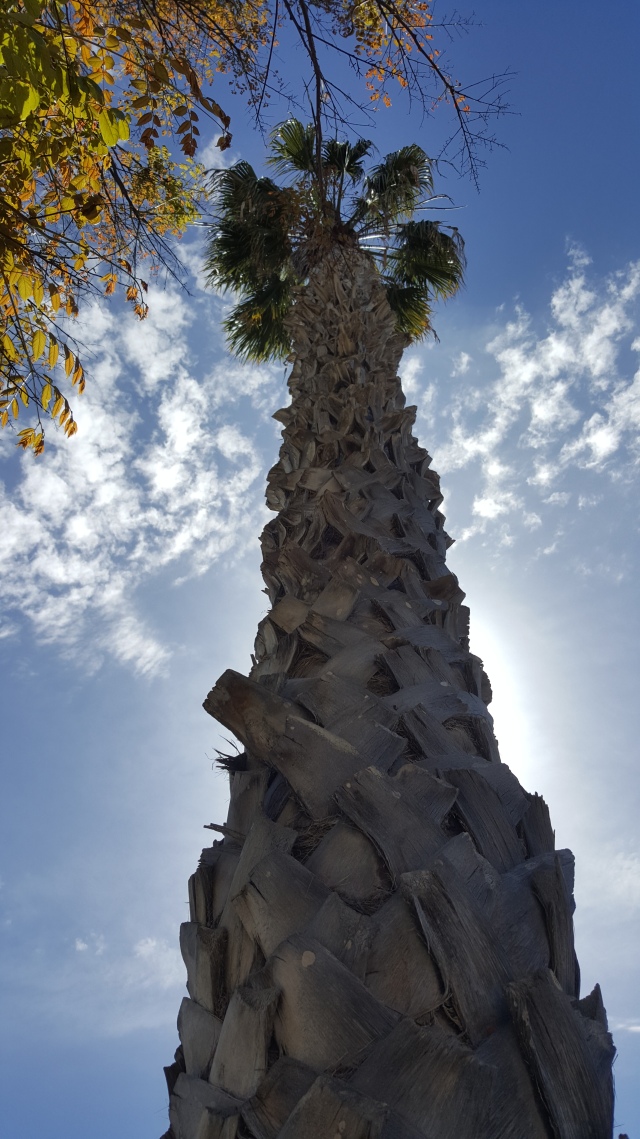 The first verse of “America” (My Country, ’Tis of Thee) by Rev. Samuel Smith, a warm and happy song, is played before Dale Sorenson, the curator, gives the audience a welcoming introduction. The first song is Toccata from Organ Symphonie V and is said to be the most famous organ piece. It starts with a fast dancing-flute tempo and leads into deep baritone ‘toe dips’. The sound takes on the tone of a piano and then simulates the strings walking up stairs before a light solo is performed. Next, is a ballerina in fast forward as the sounds mix richly and play together. I begin to feel anticipation just as the piece comes to a long, clean finish.

Choral—Improvisation on “Victimae Paschali” was made up as the piece was made by Tournemire and is a mix of “love tappy, party hard, and exotic chords”. It starts out with a retro haunted house mix, fast tempo but long notes, and then wobbles together before going back to more separate tones that are very individual but smooth and grow in volume and depth. The piece begins to resemble a spritely horn with a bass combo and with a silent beat that makes me think of reminiscing and the goodbye at the end of a movie. There’s a crescendo, then a trumpet interruption before the instruments ‘fall down the stairs’ and help each other back up to run till they arrive to a gate.

Night by Cyril Jenkins is introduced as a shimmering landscape piece with the magic of instruments not tuned together but still playing in harmony. It starts out slow and warm and lightly picks up before going back to the beginning with a higher pitch. In comes the whispering French horn and trombone with a bit of whimsy, long overtone with little notes underneath. It goes back to the light pick up before alternating between light and dark, like testing a chord, and then completing it.

Bach, always a favorite composer, will have his Orchestral Suite III in D Major performed with weightlessness, and a skipping and weaving of the notes. The Air movement sounds like success and graduation on a sunny day. Birds whistled as the piece went to a peaceful march with twirling accompaniment, and a woman beside me referenced A Whiter Shade of Pale by Procol Harum (which upon checking YouTube seems to be a common theme). The piece wants more, bit by bit, advancing slowly to the longest note before the Gavotte movement is played. It sounds like skipping through trees and light stepping with heavy feet. The woodwinds are less dramatic before the ‘space gadget’ of twinkling electronics plays peekaboo with the end. 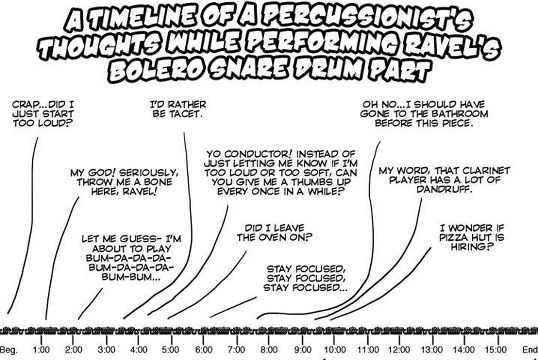 “Go Down, Moses,” we are told, is an African-American spiritual based on deliverance from the oppression of slavery as the Jews were when they traveled through the Red Sea. The piece sounds like big open arms with a grand church welcome. The choir is questioning with long resounding notes that reverberate and it’s over too soon.

“The Lost Chord,” the highlight of the program, was written while Sullivan was weary and ill at ease but finished with the sound of an amen. The notes go up and down and have a grainy vibration. The notes are wandering and the composer is trying to pick an instrument. The symphony is good but they are practicing chords out of harmony. The final note brings peace.

Bolero, a love or hate piece, has a crescendo from beginning to end. It sounds like waltzing in love with an angry interruption, like a sharp curve in a meandering river. There are short abrupt notes like a sing-along and the piece becomes celebratory, holiday festive, and very joyous. There’s another interruption but this one is of a loud uncle or carnival, which fits the merry-go-round to a spin of a finish.

The last piece got the loudest applause. There wasn’t time to play Dieu Parmi as it’s tradition to play The Star-Spangled Banner after each concert. The song was smooth, but not as emotionally evoking for me without a talented voice. Parts of the audience were singing along. Jared finished with applause and a bow. There was a lot of crowd movement during Night, misplaced applause during Bach, and the wind picked up during “Go Down, Moses.” Jared tells us events like this fulfill the vision of the Spreckels brothers of ‘a good day in a park’ and invites us to: come again, donate to the Spreckels Organ Society, and buy souvenirs from the gift shop. The audience is invited on stage to see the organ and ask questions.

There was plenty of photo taking pre- and post-show, but most of the audience was respectful during to keep their hands and voices to themselves and let people enjoy the music. I think someone saw the importance of introducing kids to classical music without the possibility of them interrupting a paid show in an enclosed theatre. It also gives tourists, new locals, and those otherwise unaware a taste of the art this city has to offer. I will be going back next week for the Earth Fair. I enjoy events I can attend without having to pre-plan, free or not.

It’s important for everyone to be introduced to as many new things as possible to inspire ideas and to collaborate with what they already know or are influenced by. Indoor concerts leave the audience with applause, low light, and music, but I love the outdoors and would prefer the minor distractions in a beautiful afternoon to a dark room in the middle of the day. I’m grateful for the free opportunity to listen to such grand, historical, popular, and memorable music from excellent composers and the people lucky enough to read their music and play it so properly and respectfully.