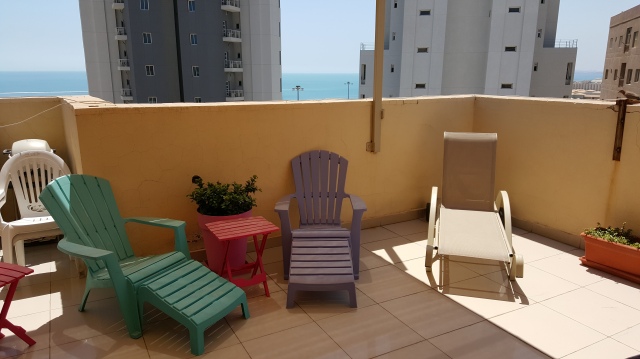 Shelley comes out of her room and I greet her cheerfully, but fall back asleep while she makes us breakfast. I wake to the smell of biscuits with currants and drop a bag of Earl Grey tea in my cup at 9:30am. After we eat, while Shelley gets ready to go, I’m invited to look at her enormous balcony, with sea view. There’s room for a hot tub and a hammock to go with all her lounge chairs and grill. I could live out here in the winter.

Shelley grabs one of her bikes to take to the shop. I’ve agreed to join her on some errands to get another perspective of Kuwait. We leave the house at 11am and her usual mechanic isn’t in at Extreme Sports, but we leave the bike for later. I tell her it’s great that they have shops here and she says the bike culture has grown a lot in recent years. The only change I’ve seen in Bahrain is guys with pink helmets on. They take donations as it’s now a law, but I still don’t see a place to get your bike fixed and the new ones are pricy.

The next stop is Eureka, an everything electronics store, complete with large fish tank as the centrepiece. She needs a new fan and I’m busy looking at the pink appliances – a Arzum Firrin toaster with a sliding tray (I was excited thinking it was conveyor belt style); an iron that looks like a space ship; and a Hello Kitty Instax Mini camera. The sales associate writes down what you want and tells a stock guy to get it ready. You take the paper to the cashier desk and then the receipt to pick-up or arrange delivery.

We find parking near the phone avenue and I appreciate the concept here – food on one street, textiles on another, and all the car lots together. It makes it easy to shop and compare prices. We walk into the first one and he tells us to cross the street. In haggling, the guy doubles the price, so we go back to the first. We cross the road a few times, luckily not having to wait on heavy traffic, and then walk into two shops next to each other and find a charging cable at the right length and price.

From here, Shelley is ready to drop me at Souk Mubarakiya and go on about her day. She stops the car near SoMu Square; a new design area by Ahmed and Bader, covered with murals and owned by Kuwaitis selling a mix of traditional ideas with a modern touch; and I hop out. This is only one corner of a very large market. Most of the walkways are covered and hidden in the shade are shops that look new with merchandise pouring out and calls to bring me closer. Other shops are covered with bundles of cables and dusty façades.

I think a lot of people use this area as transit as the only shoppers are near the food. They sell plenty of teapots, toys, and towels. I stop on the corner to buy a green apple/kiwi juice from two Thai ladies. I recognize the language from the restaurants in Bahrain and instead of saying thank you (khop khun ka) tell them sawadee kha (hello) as I start to walk away. They call me back to remind me I haven’t paid yet and I give them a dinar. 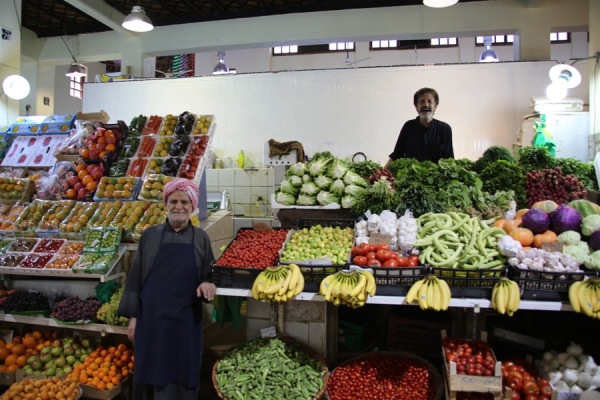 vendors in the souk

I can smell the fish market from a distance and hold my breath as I pass. You can save a dinar by buying strawberries in the market – a common concept everywhere, and though I may have upset the fruit guy, the veggie vendors are happy to pose for a picture – that they asked me to take. I make my way back through the souk and though I pass many of the same shops, there are many I’m missing, especially as they start to close for their afternoon siesta – a habit in Kuwait.

I’m in a hallway of sorts and this man stops in his tracks, and then waits for me to approach before turning in my direction. I thought it weird, especially when he made a point to graze my elbow – something that does not happen by accident in the Middle East. Luckily we both carried on and nothing had to come of it. I think I was more upset by seeing a girl throw her ice cream wrapper on the ground next to the trash bin – one of many that line the walkway and yet there’s still litter. 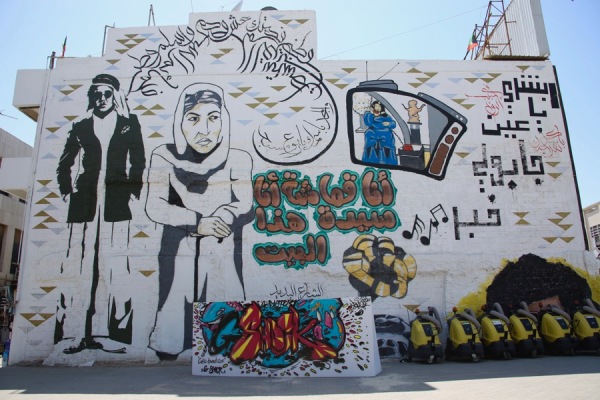 mural in the souk

I’m heading to Liberation Tower, a landmark on my list, and am grateful for the guys willing to jump into traffic and stop cars from hitting me as I use the opportunity to cross. Some countries consider this jaywalking – a ticket-able offence, but in the Middle East someone monitors pedestrian traffic and then builds the crosswalks to suit them; most including a speed bump to slow the cars giving the people a better chance to run across.

I stand in the tower’s shade in a parking lot to grab a photo without the sun’s glare. I might not be able to go inside, and don’t bother to check (though I should have), but I’m seeing the highest telecommunications tower in the Middle East, and the fifth highest in the world built of concrete in 1996 to reach a height of 372 meters. From here I think I’ll walk to the National Museum, or at least through the skyscrapers till I reach ocean, though I have no idea which direction I should be going.

Steve works short hours on Saturday and asks where I’m at. I hop into his Mitsubishi at 2:20pm for the Tour Du Jour. Our first stop will be a return to the Kuwait Towers to enjoy a view of the city. They are different from the other 32 that are of a mushroom design and covered in blue and white stripes. The viewing tower was opened to the public in March 1979, and closed from the same month in 2012 to 2016. I might not have been there for the fireworks, but I’m grateful for the timing.

There are about 41,000 enamelled steel discs in different shades of sea and sky covering the concrete spheres on rockets, and over that is the net of LEDs that bring so much attraction at night. Now paying the 3KD each to get in doesn’t seem like a bad deal to keep a multi-functioning structure operating properly. I had a bunch of people question why I would bother going to Kuwait, but I’ve gotten the same questions about visiting Texas and Chicago. The answer – I know I’ll have fun, learn something about others and myself, and possibly inspire someone.

Or that something as simple as an entry ticket could excite me. Instead of printing out two tickets, we’re handed one with the number 2 on it. I think this is great to help save the planet – the printing process and how many end up on the ground. I also wonder how many children will put them in scrapbooks anymore or just take a picture of them like I do to add to a growing media collection – and hopefully share their thoughts about the effect a place has on them with more than just the people they invite into their home.

There are flowers growing ever so brightly outside and arranged in a rainbow pattern. Up the lift, there is a view for maybe 10km to the horizon. I can see the Symphony Complex Hotel in Salmiya, the 35m tower in the middle of Green Island on the water, the Kuwait Trade Center (Al Tijaria Tower) that stands alone, and the apex of Kuwait City – the Al Hamra Firdous Tower at 412 meters. Below, we can watch people slip, slide, and swim at the Aqua Park.

The windows might be dirty and the fingerprints many, but this doesn’t stop us from checking out the rotating restaurant above us before going back down. Steve says Green Island isn’t big, but it made my list, so we will go. Along the walkway are boys playing wet football on a large inflatable covered in soapy water. Google only shows me images of Brazilian and Japanese women playing this sport, but it makes sense in the heat and looks like tons of fun.

Another perspective of the city, and another entrance fee to what seems like a public park – and that’s exactly what it is. Families come to cook and eat and rent bikes for 10KD an hour – something we decide against. We only walk half the island, but it’s enough to see the kids cycling, dancing, and riding jet skis. I told the dancers not to stop on my behalf and they invite me to join. They didn’t want to see my salsa or line dancing moves anyway – or maybe they did. 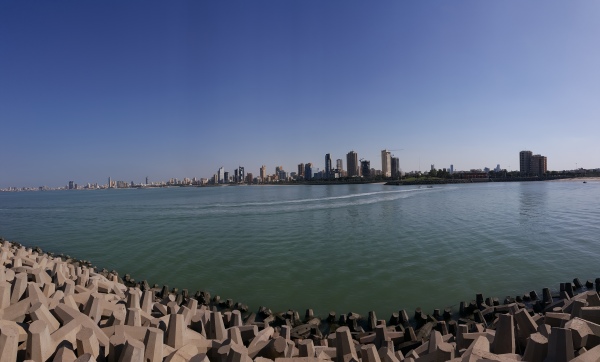 Next on the itinerary is The Scientific Center, a bit of an aquarium, including a fox, a bat, and a scorpion. I appreciate the fossils, the boats, and the incredible view of the city skyline over the water. This occupies an hour of our time and then we’re off to pick up Lioba who lives near a green and gold mosque, red dumpsters, and a little boy who likes to climb through windows. She will join us for dinner at Ayyame Restaurant at Marina Crescent, where I saw my first beach in Kuwait.

The views are fantastic from our upstairs table on the corner – the harbor, the skyline, and the character cruise with Mickey, Elsa, etc. waving to the passing children. We share green bread, pita, and one with seeds; we had mutabbal with spinach and mushroom; a mixed green salad with citrus and sesame; and spinach with halloumi. Steve can appreciate the look of the greens, but can’t consider dinner served till the waitress brings a metal box stuffed with chicken and wrapped in bread. 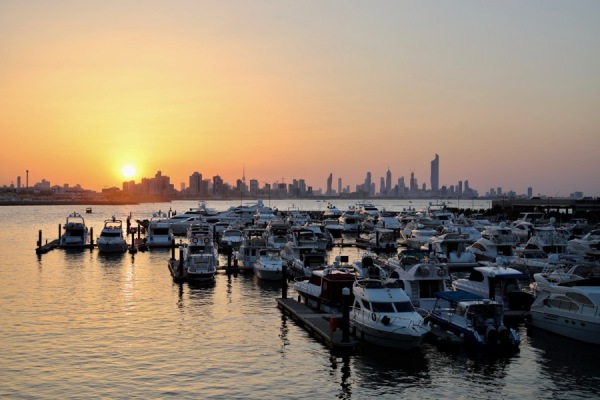 I can settle down to my seat now that the sun has set around 6pm and the food is on my plate. I help the vegetarian and the carnivore eat as much as we can, and somehow we find ourselves downstairs an hour later about to share a plate of kunafa, rose sheesha, and some hot tea. Özge and Gonca were having dinner at a restaurant nearby and they will join us for laughs and conversation. I’m enjoying the crowd, but soon Lioba has to leave (for work tomorrow) and she tells me she’s covering the bill (for Steve’s kindness to her last night and today).

I keep it a secret till we get ready to leave and the person people want to eyeball isn’t there. All they can say is thank you – and plan to pay for her at the next meal. Being around people like this makes me feel safe and loved. I can share with them, rely on them, and not worry about petty differences. They aren’t concerned about my religion, political beliefs, or paycheck. We can have a good time and the only argument is who is going to pay – because we all want to, not because we have to. Shelley is either asleep or still out with her friends when I get back at 10:45pm.