Posted on November 15, 2013 by TheJessicaness 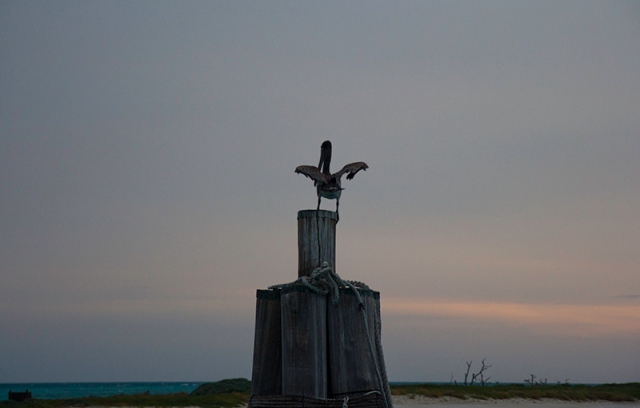 The sun wasn’t seen, but we know it rose. We walked the island again. I could get used to living on the beach and walking the island’s perimeter. This makes me want to go home and walk that beach too for fear that it might miss footsteps pounding on its sandy shores. The water is inviting and the fish we see even more so. We eagerly go back to the tent for flippers to swim with and calories to eat and water to hydrate – we, all campers, can admit to not drinking enough.

We have all brought a gallon per person per day and all have left with at least half of our water untouched. We had planned on using more to make dinner, but perhaps now we could wash some of the salt and coral off – nah. Instead we will give the unopened 2.5 gallon jug to the rangers, and help save the park money. Caleb will just dump the other  one out which is a waste and hopefully a lesson.

The weather is fine and the water too – it’s the in-between that bites my skin, but Caleb has seen a sea urchin and I am determined to share that view with him. Once in the water the visibility is low again and the fish diminish in numbers. We are being watched by the lone egret on shore that is still catching his breakfast. We have a small cove of semi-calm water to swim in and the edges seem colder and rougher. I’m glad we were able to get back in the water, but I wanted to still be in there when the boat pulled up.

We went to ask the rangers if the catamaran was coming today and they assured us it would since the seaplane was already on its way. I didn’t want to pack up just to have to unpack later for the extra night we might have to spend. We are drying off in the tent and as our neighbors pack beside us it reminds me that today is our last day here. Regardless of the weather the island has been great and I will miss this place.

I already want to come back so that I get the chance to see a sea turtle and all the other creatures that inhabit this area. The boat won’t be here for another hour, and won’t leave for another four after, but already we have all our gear packed – almost so for the airplane ride home. The boat arrives and our tummies grumble. We wait at a picnic table until 11:00 am. Inside we find sandwich offerings of turkey, cheese, tomato, and peanut butter and jelly.  And potato salad, chips, cookies, and strawberries with watermelon.

We let our food settle while we sit upstairs and then take one last walk before saying goodbye. We hope to be back in another three years. The crowd returning with us will be a lot more ethnic voices and some pregnant ladies. Before departure Caleb’s iPod will die and he will attempt a nap while I read. With everyone on board we hit the choppy waters of the afternoon – it almost seems the captain is aiming to make it a bouncy ride – I haven’t felt this since being in the navy and it brings back fond memories.

The crew passes out comment cards with a prize for one for a return trip on them and sells raffle tickets for a t-shirt – we win neither. We have no luck getting a taxi as each that passes us is full. We are fine with walking at first, but the bags grow heavy, our feet sore, and the rain more frequent. Caleb leaves me at a bus stop near the beach with our stuff to run the last mile to the airport to pick up our rental car. Caleb pulls up and hands me the keys to the Mustang convertible and I throw the bags in the trunk.

At BurgerFi for dinner we meet two couples celebrating 20 years of friendship and marriage from Montana visiting Key West for ten days. On the way to Miami the rain will stop and we put the top down and some speed on the car. We call a hotel reservation number to find a room for the night and almost book a place north of the airport – we are south of it. We pull up to the Quality Inn in a Ford Mustang next to a Chevy truck that is staying for a Ford event and get one of the last two rooms available.

It’s $89 plus tax with a 36 minute ride to the airport in the morning – in six hours – and it smells like the smokers just left. We got directions, took showers, and now Caleb tries to sleep. I should do the same. I can still hear the wind and the waves and feel the motion of the ocean. The hotel has been resourceful in shoving their original fluffy pillows, now flat, into pillowcases half the size. I can hear some concert outside the room across the street and feel just as excited about traveling now as I did at the beginning of the trip.