Some days Uncle Ed feels like making blueberry pancakes and riding his Harley. I just happened to be visiting on one of them. For this ride I get a different helmet with a wireless mic and a lighter jacket – we are expecting warmer weather. We were going to take the 20 by Mt. Baker towards North Cascades National Park, but saw rain and felt some sprinkles so we changed course and went by the Canadian border instead.

We would visit Polnell Point and ride down West Beach Rd and Scenic Heights Rd on Whidbey Island. Then head to the mainland to ride through downtown Bellingham, out to Semiahmoo Park that is almost swimming distance from Blaine Marina Park – with a bridge there would be a complete route around Drayton Harbor. Instead we drive back around so that I can see four different border crossings.

There is Peace Arch Crossing that I went through in May, Pacific Hwy Crossing near the Smugglers Inn B&B, and Aldergrove located 12 miles east off of H Street Rd. I can see the border and want to just hop over and jump back, but that’s illegal. It just seems so easy without a river in the way. Good thing I’m on the back of a bike with a law abiding citizen so there will be no activities for me to have to blog about from jail later.

Thirteen more miles to Sumas – the fourth border crossing, and all located within 26 miles of each other. One day I will have to cross them all and visit their parks, but today we are heading south on the 9 until we get to Sedro Woolley. There will be some dead-end roads and other roads we’re not allowed on – this just adds to the adventure of the trip. I never feel lost on the back of a motorcycle when Uncle Ed is driving.

After Sedro Woolley, and a much needed bathroom break, we will take the 20 back to the island. I learned that having to go pee on the back of a bike can be made much worse going over bumps and around turns. I now know to go when the chance presents itself – whether I feel the need or not. And I’m guessing trying to go in all that gear in the bushes would have proved messy – and it’s illegal.

Dinner would be in the oven upon our return. Lorraine was getting hungry and timed it perfectly. I was able to get changed and have two slices of veggie pizza with some kale salad and some donut. Then I would choose to watch Chocolat (Johnny Depp film I hadn’t seen). We were going to watch Sweeney Todd: The Demon Barber of Fleet Street (another Depp film I hadn’t seen) that came out in 2007, but they had one of the earlier adaptions and I’ve seen one of them. 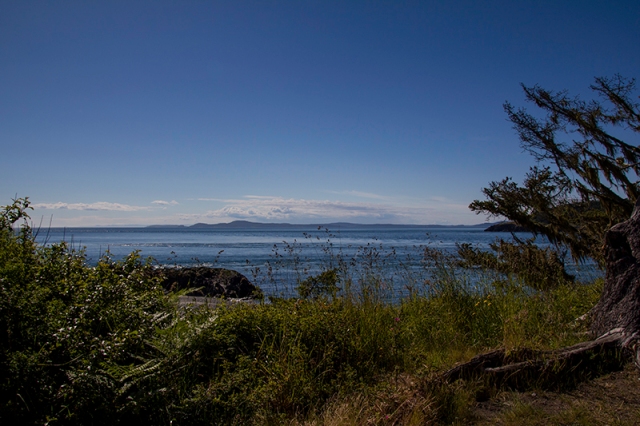 view into the bay

I was hoping Johnny would play a bigger role, but I really liked the film for the perspective it showed on the introduction of chocolate to society and the ability it had to disrupt a town’s set ways with its taste and calming factors. It might not be accurate, but history tells me that cacao beans and their byproducts used to be a delicacy of the rich, so it’s nice to see the working man enjoying a new treat and making it more than just a drink.

All this talk of chocolate cake, candies, and cocoa would put me in the mood for something warm myself. Lorraine offers me three flavors of cocoa and I choose the chocolate orange. I would’ve made it myself, but she’s already seen the film, and it’s getting late so she lets me enjoy the film and later the warm cup in my hand. As great as I thought aunts were, I think them being grandmas too adds an extra dose of kindness – I’m more than grateful.