The Peace of Being Alone

Posted on June 5, 2013 by TheJessicaness 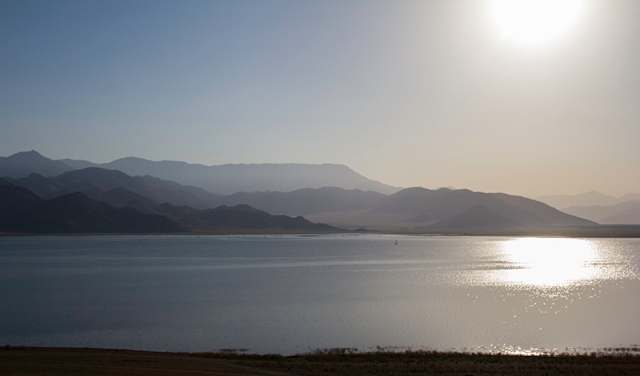 Some days there is no greater joy than riding in the car with the window down listening to the birds sing and the engine rumble its way around the curves and up the hills. I start my morning off at 4:30 am when the light and temperature change. I grab my coat as a blanket and go back to sleep until 5. Then I get up to watch the sun rise and the bunnies hop. Today will be a slow drive; I will average 24 mph and cover 310 miles in 13 hours.  I got to drive around the northern half of Lake Isabella and through the town of Kernville.

Heading west on 155, Evans Rd, will bring me to the Greenhorn Mountain Park. It was the old stone wall that drew my attention and caused me to park on the shoulder. I felt like moving in. There is a fireplace, a curved staircase, an outhouse, and a mattress spring along with some other scraps and parts. Further down the road are squirrels, cows, and turkeys playing in the street. 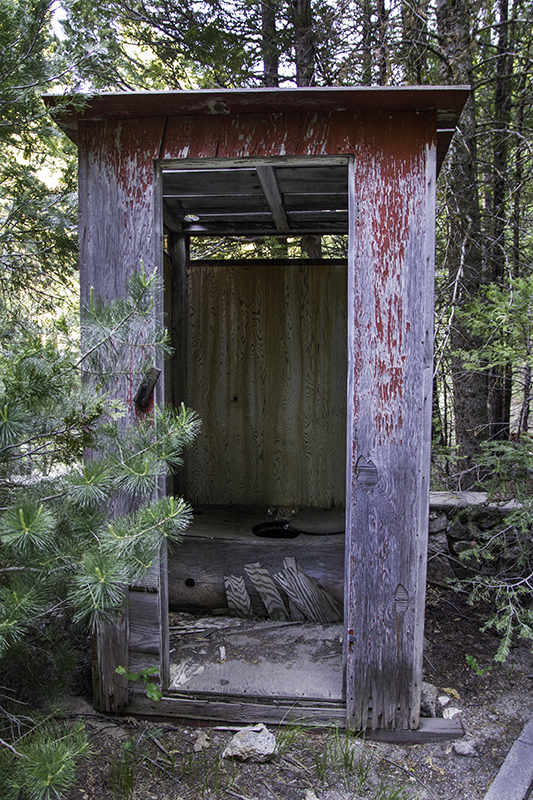 The fields are filled with trees, rocks, horses, oil pumps, and an old railroad track. On to 65N and the road is being repaved leading into Porterville. Then I drive through Exeter, past Lake Kaweah, by Three Rivers, and into Sequoia National Park. This place makes my eyes pop. There are hills covered in water and color – green, yellow, white, pink, and tan. Each tree is a piece of art and I’m flabbergasted at how much I love the look and feel of them, so much so that I want to wear their bark and carry a matching bag to pet.

They are very fire resistant and their bark will grow over scars caused by wildfires that burn down smaller trees and brush – just nature doing its thing, but I think it’s phenomenal. I am all smiles and I want to touch each tree, get to know its bark. Somewhere along the road is Auto Log that fell in 1917 with a base diameter of 21 feet and has been photographed with cars on it – hence the name. Being dead it didn’t feel the same, but that didn’t stop me from laying on it and feeling its size and strength. 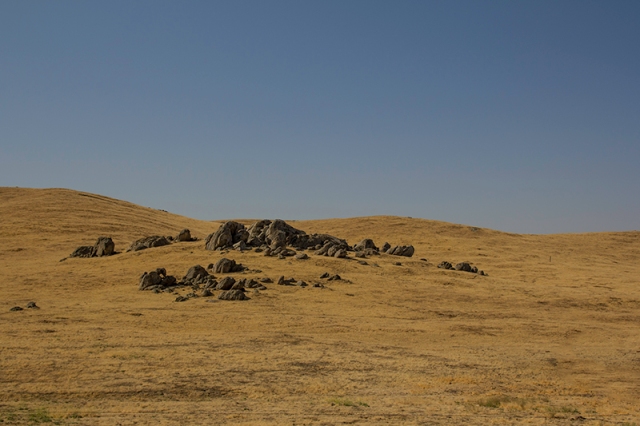 Next on the list of places the ranger suggest I see is Moro Rock. Judging by the picture I think it’s going to be up 20 stairs and out to a viewing ledge. I was wrong – and that made me happy. There are over 350 steps to the top. Two girls won’t make it; one is afraid of heights and the other feels she is suffering from elevation sickness – the peak is 6,725 feet, and she is from Florida where the highest point is 345 feet – that’s a big difference.

I make my way up the first flight of stairs and am already impressed with the view. Then this guy tells me, ‘Wait till you get to the top!’ It’s crazy how such beauty can make me so happy. Others are talkative and friendly too and we share the best angles to photograph of the stairs and mountain tops. I wouldn’t mind living up here, but it’s time to go to the next stop that will make me smile – I get to drive my car through a tree, but not exactly. 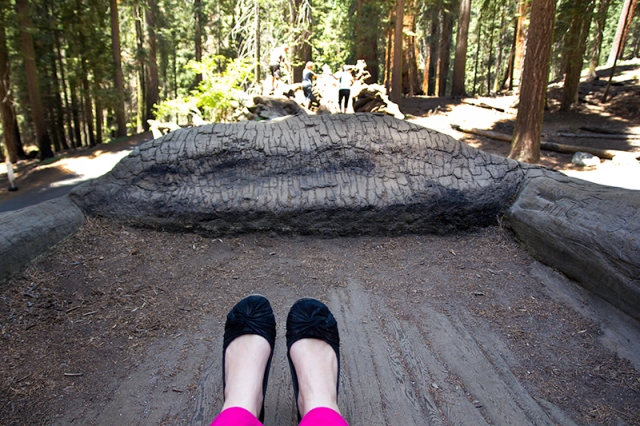 The tree has a big hole cut out, but is lifted off the ground. There is enough tree to go around, but I understand that if enough cars were to run over it there would soon enough not be any for the rest of us. The size impresses me and is hard to fathom – I grew up around small cedars and oak trees. I take a picture from every angle and realize that if this tree were hollowed out I could hide my car in it – mind blown!

If that weren’t enough, I get to see the largest tree on Earth – not by height or width, but by volume; its circumference on the ground is 102 feet – big enough to not fit fully in a picture I took standing on the railing. There are many foreign visitors here getting their photo taken in front of this giant wonder, others are busy behind them trying every possible angle to show family at home just how, “F*ing Large!” these trees in America are. 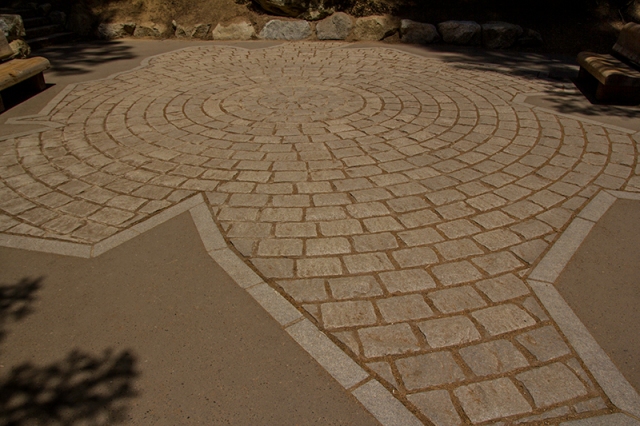 base of General Sherman Tree

I arrive at the Lodgepole Visitor Center at 2:30 pm and am now worried that I may not see the rest of the park. It took me 3.5 hours to see what the ranger says it takes most people 45 minutes – I’m not most people. I decide to drive to Kings Canyon to see some of that park too. It takes me another hour down a long and beautiful road; it’s hard not to stop. I get my passport stamped, view the exhibits, and ask the rangers what I shouldn’t miss.

I’m told it’s a two-hour roundtrip to the Roads End and that there are two waterfalls I should see along the way – Grizzly and Roaring River. I walk the Grant Tree Trail and learn about other honored trees around the world – Bodhi trees in India, the Major Oak in England, the baobab in Africa, the Great Sugi in Japan, Tane mahuta in New Zealand, and the El Tule in Mexico – the thickest tree in the world. 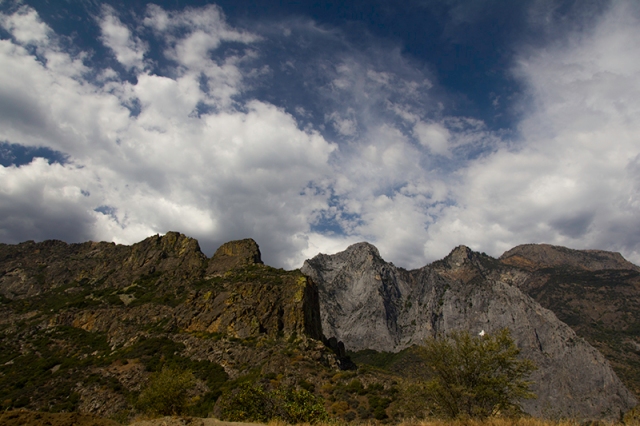 There is what’s left of a hollowed out sequoia that I was able to walk through. Further down the path is the Gamlin Cabin built of stout wood by two brothers. This cabin would serve as their home, a storehouse by the U.S. Cavalry, and eventually the quarters of the first park ranger. The General Grant is the 3rd largest tree by volume and was designated as the Nation’s Christmas Tree in 1926 by President Coolidge.

I stopped to take a few photos along the way, but attempted to make it to the Cedar Grove VC that is located in the middle of the park. Most of the park is hiking trails with wilderness ranger stations scattered throughout that are only open during the summer. I made it by 4:45 pm, but they were already closed. I went to Roaring River Falls and climbed down the rocks to touch the cold water – even after reading the deadly river sign. 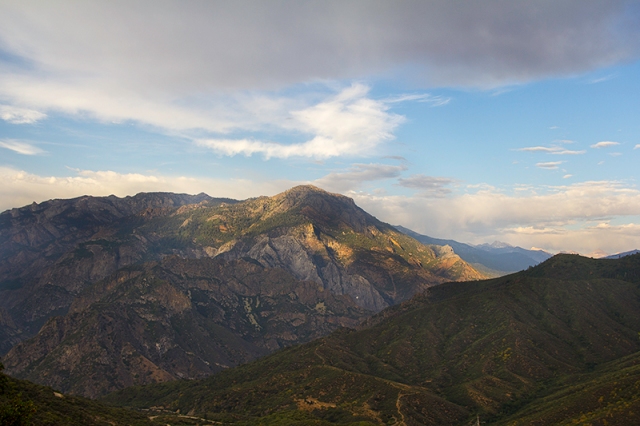 another scenic view of the park

The sign for Grizzly Falls is obvious on the way in, but I missed it on the way out. I stopped at Boyden Cave and watched as people came off the trail. It was roped off for the evening, but when I saw the ranger or guide I asked if I could walk over and take some pictures of the river from the mountain side – she said yes, and said I should come back when they’re open so I can see the inside of the caverns too.

There was a guy repainting a bridge. I apologized when I realized he had waited for the last group so that he could finish and go home. I was able to step around and get some pictures. The trail began to get steep, so I hoofed it up some more, and then returned to an empty parking lot. I thought about taking a different route to see more of the park on my way towards Fresno where I would spend the night, but couldn’t find a way through. 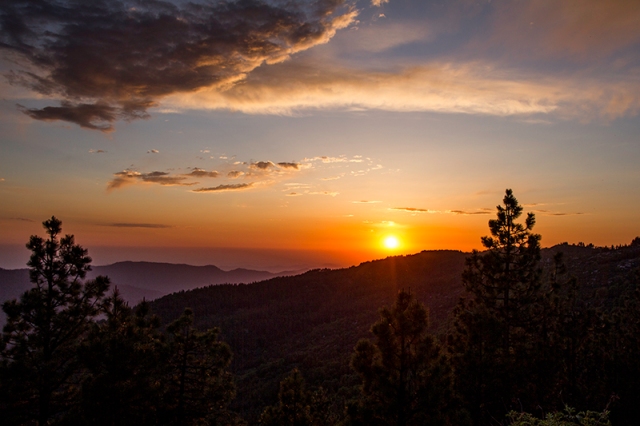 I turned when I saw the sign for Hume Lake. It had pictures of camping, picnicking, gas, and phone available. It is a huge resort. There are cabins for a summer camp, a church camp, a visitors lodge, and cabins that appeared to be homes. I drove by the gas station and the two pools and then took a tour of the cabins – there are so many. I got out and walked up some big stone steps to this open field that was lined with cabins in the trees.

The road I turned on was supposed to continue on towards Landslide and Tenmile campgrounds, but I ended up turning around and leaving the way I came in. I would watch the sunset on my way out of the park. I didn’t want to do any night-time driving so that I wouldn’t miss a thing, but I had a full day so I can’t complain. I stopped at the market in Grant’s Grove for an egg sandwich and a drink. I noticed that the backseat now had more sandwich on it from my lunch. Note to self: don’t make almond butter sandwich when it’s so hot that it melts off your bread and onto the seat and floor.

I drive into Fresno at 9:45 pm with expectations of $100 rooms. I’m too tired to drive another hour to a campsite outside Yosemite. I pull into the Motel 6 offering a night for $40. I’m enjoying the A/C and clean skin, but it doesn’t compare to a night under the stars. Next time it’s too windy for a tent I sleep without.

5 Responses to The Peace of Being Alone