Irena and Nadia Come for Cake 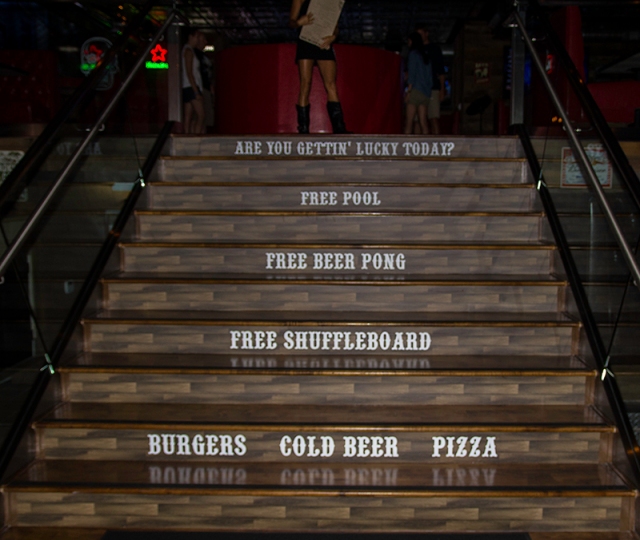 The more surfers I have, the easier it gets. Irena wanted to leave Denver for her daughter, Nadia’s, 14th birthday. These two are best friends being able to travel together, agree on everything, and share a sense of adventure. We agreed to meet at Ranchos Natural Foods, a restaurant in Ocean Beach with Mexican and vegetarian cuisine at 7:00 pm. I arrived 15 minutes early and recognized them immediately.

I learned that they don’t eat eggs – lucky for them this place serves vegan chocolate cake and I had the vegan carrot cake. I had thought we would eat here so we could walk at Sunset Cliffs after, but it was already dark, so we walked to the end of the pier instead and Nadia showed the fishermen and locals and other tourists her skills with her light-up glowing poi balls – that she got inspired to learn so that one day she can play with fire. 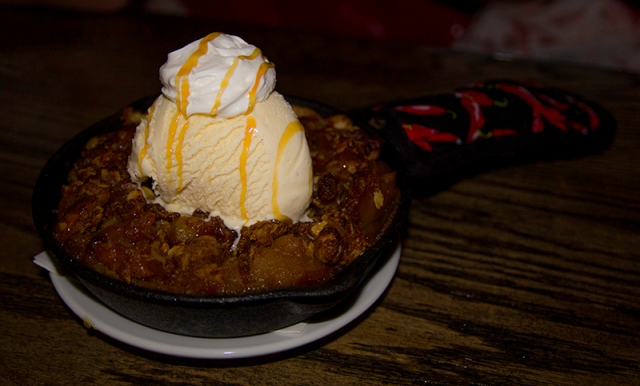 They rented a car, so they will follow me home where we talk about work, school, vacation, kids, pets, San Diego, Tijuana, the Zombie Walk, and plenty more. Irena is not shy to ask lots of questions – most I have answers for. Saturday morning, we will leave Nadia to sleep while we go to Big City Bagels in Hillcrest for an egg-free breakfast – and lots of sugar in Irena’s already sweet coffee – she knows how to fight sleep – and work while on vacation. 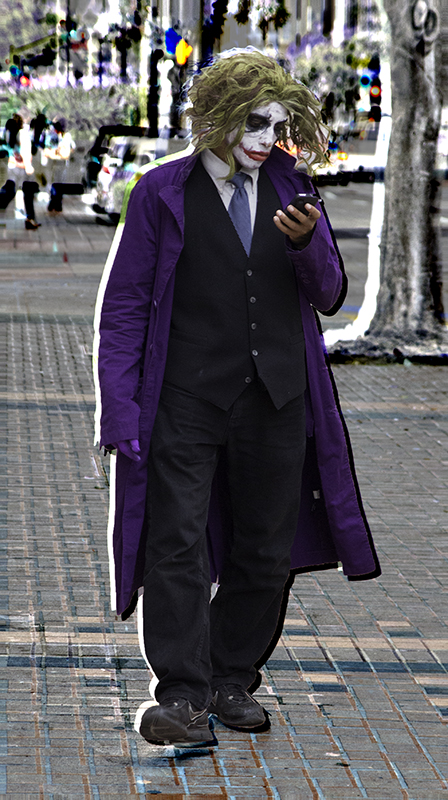 Joker on a phone

Back at the house they chow down on bagels and chug coffee in prep of their day at Mission Beach. They have reservations for surf lessons and reading in the sand. We will meet later to head to Gypsy Treasure in La Mesa to get zombie-fied with bloody wounds on our arms and faces that we apply using the reflection in the stores windows. We continued to find new blood on ourselves throughout the night and our hair was sticking to our faces – adding to the effect. 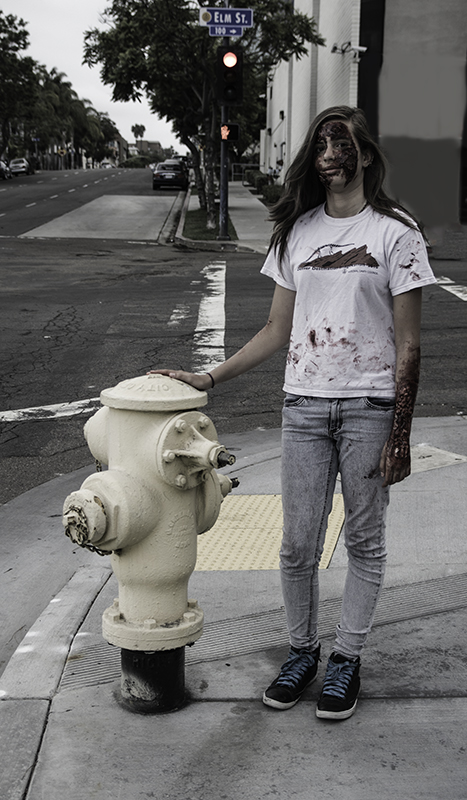 Once downtown, and closer to the start of the Zombie Walk at Children’s Park, we became hungry. We agreed on pizza and asked the guys outside of Hotel Wyndham Harbor Lights for a recommendation – Lucky Bastard Saloon. We had to wait 15 minutes for them to open at 5:00 pm and then we sat upstairs next to the free pool table along with a shuffleboard table and beer pong table that are available.

We ordered our own 10-inch pizzas and shared an apple crisp – that came out before dinner. We made our way towards the start of the walk, but were at least 30 minutes late. We got asked by lots of people what happened to the walk and it seems we weren’t the only zombies to be late and lost. There was a big commotion about an actor from Breaking Bad, a girl with her fake boobs creating a traffic jam, and real officers fake-arresting people as a fundraiser for a museum. 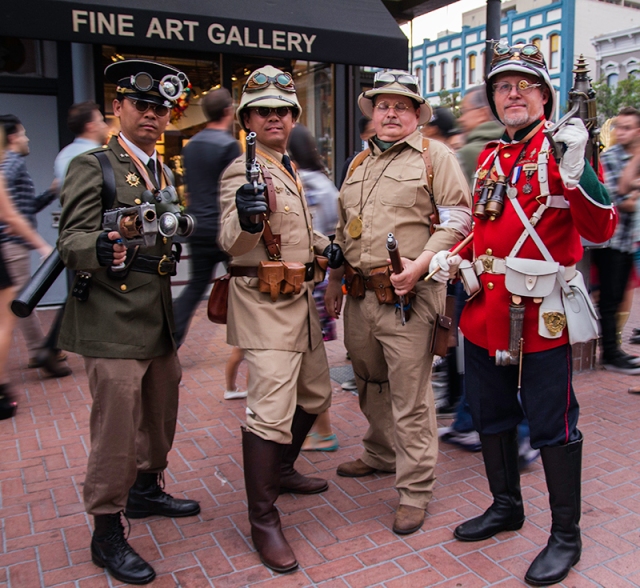 We got asked by others if they could take our pictures, take pictures with us, and if we could take photos of them – we had a photo-tastic night posing with police, clowns, heroes, nemesis’, and a Pikachu zombie. I think we had as much fun washing off the blood and peeling off the glue in my bathroom as we did putting this stuff on as people passed us on the street unaware of tonight’s events – a nice surprise to unknowing tourists that happen to be in town while Comic Con is in full force – such is the case with Irena and Nadia. 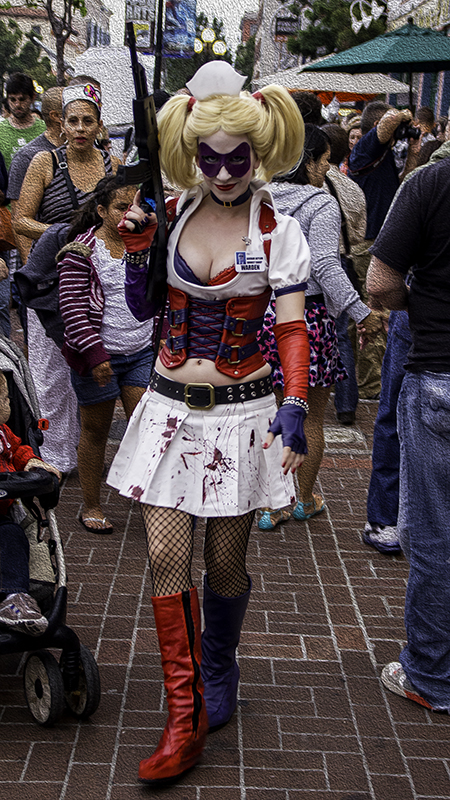 Sunday morning we will go to Katy’s Café in Imperial Beach and get two almond joy mochas and a chocolate coffee to get our day started with a view of the Pacific Ocean on our way to Tijuana – they are surprised by how close the border is to my house. My usual parking spot has gone from $7.00 to $10, but that won’t deter us – here to walk, eat, and shop…and stand in line. They are amazed at how easy it is to enter Mexico. 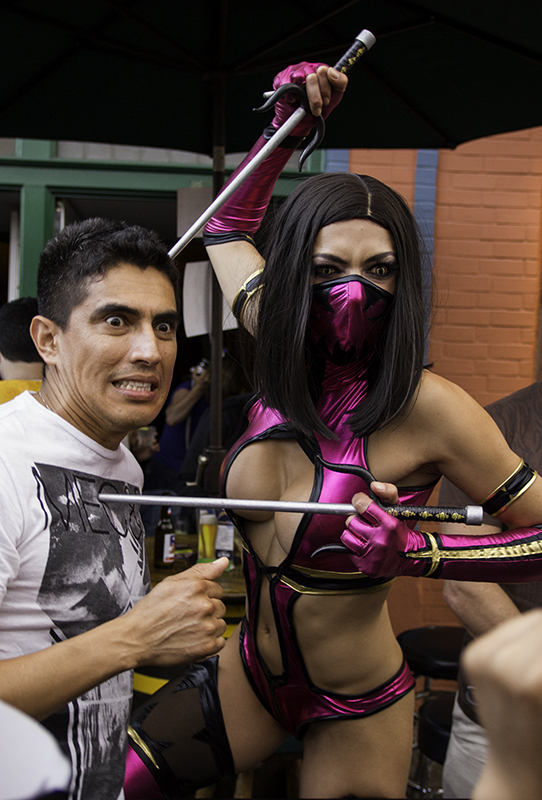 We are here early – before the vendors have had a chance to set up along the bridges, but the shops are open and the guys are out advertising their wares…and talking loud enough for me to hear, ”she’s going to get her camera stolen wearing it about like that.” I replied, “that’s what they said last time,” to which he said that I had gotten lucky last time…and the time before that, but I don’t like hearing him say it…to leave me thinking he will try something later, but of course my camera and I made a safe return.

Irena wondered out loud how someone would steal a camera with the strap around my neck. I simply told her they could cut it off or push me down – with a fist or a car. The possibilities are endless when someone really wants something, but I would be more than willing to give up the camera, but preferably not the memory card in any case – I have more to live for than that. Irena is not shy to asking questions and will keep them coming throughout the day about Mexico’s history, pharmacies, restaurant menus, homeless people, zonkeys, vendors, and things to do. 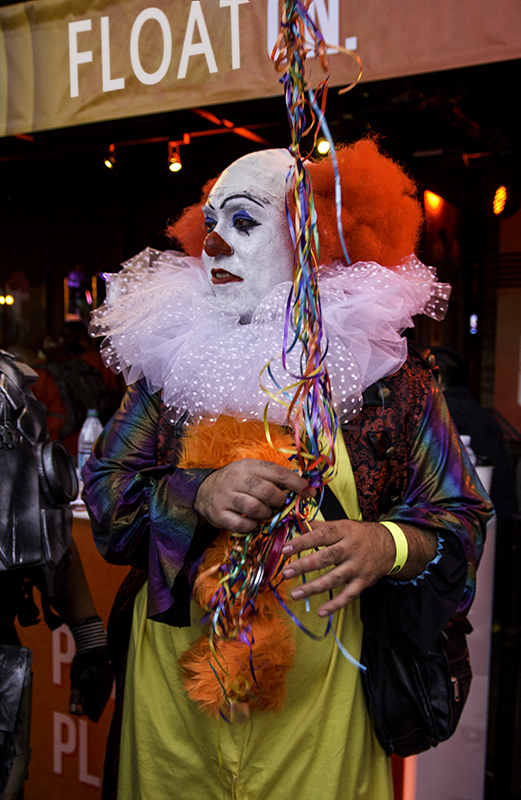 They keep friends back home in mind while looking at sunglasses, necklaces, and a new bag for Nadia. They sit in a hammock swing – I love them too, but not only do they not want the burden of carrying it around today, Irena doesn’t want to carry it on the airplane as they only brought carry-on luggage and won’t have the space – these girls know how to travel. I offered to mail things back and it was considered, but not done as the chair seems nice, but then you have to think of where you’re going to hang it. 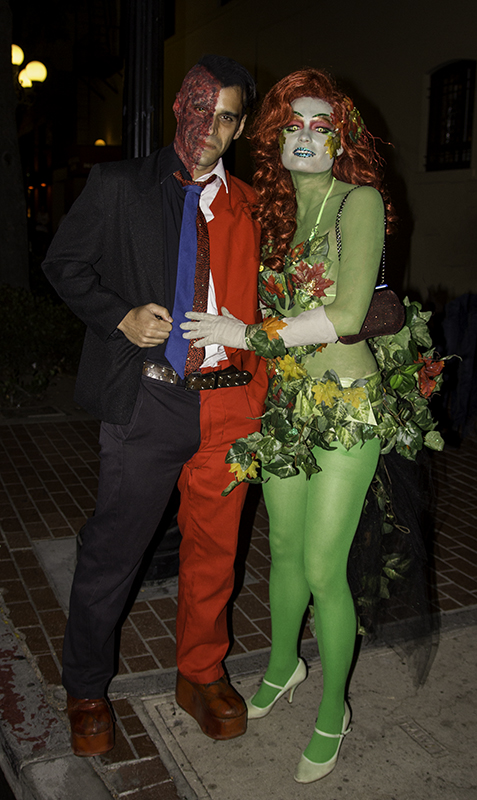 I had yet to go into a Mexican grocery store in Mexico, so in we went to Soriana Super where a lot looked the same, but they had chips for sale by bulk and a large variety of donuts and baked goods out on shelves – no sneeze guard. That didn’t bother me, but we hadn’t eaten lunch yet, so I thought I would wait on the sweets until Nadia noticed a childhood favorite banned in the U.S. as a choking hazard – Kinder Sorpresa (stands for child surprise). It’s a chocolate hollow egg with a small toy inside. 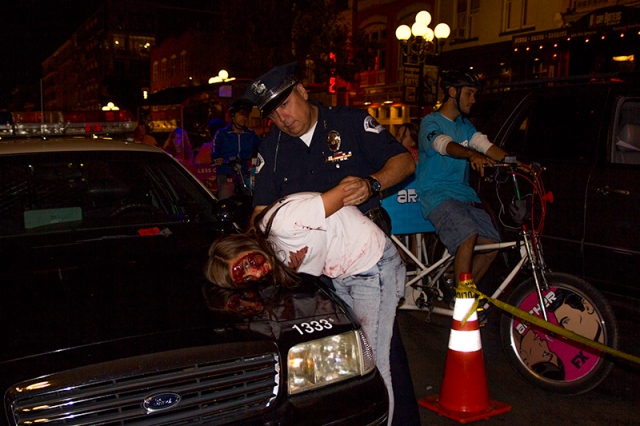 Nadia getting arrested for being dead and disorderly

Nadia and I eat one each revealing a Barbie and a pterodactyl on our way to get some ice cream. Inside the egg comes a Barbie with torso, legs, a stand, and paperwork – one showing how to assemble her and what her friends look like, and another in 37 languages letting you know that this toy is not suitable for children under 3 as small parts may be swallowed or inhaled. I’m sure the right person could swallow the whole egg.

I asked around for Tepoznieves – not just nieves (ice cream), but a special shop that sells flavors of corn, cheese, anise, horchata, tuna, chile carrot, beets, prickly pear, fig with mescal, and yogurt coffee – just some among their 100 combinations. Instead we are directed to some shop on the corner with 12 colors to choose from. Mine tastes like grape and pistachio almond and I’m grateful for the food, company, and culture that I find myself in on this beautiful day. 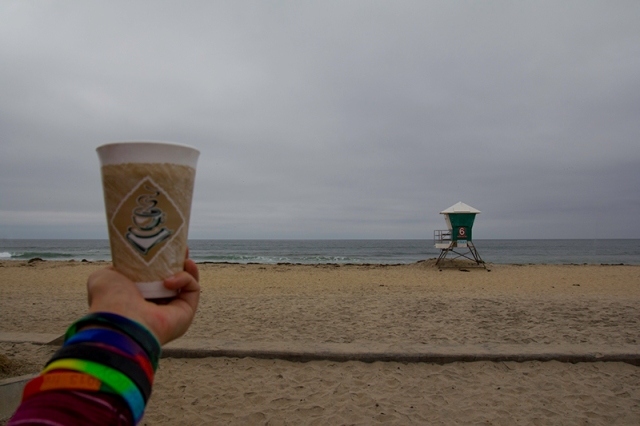 coffee at the beach

Not wanting to walk to the beach or get lost finding new places to explore it’s decided that we can go wait in the long line. At one point we are offered, for $20 each, a 40 minute ride to the border – no thanks. As we pass the 2.5 hour line marker I know we are going to be here a while. We tried another option, bus for $6 each, but they were already full, so we got in line to wait. After an hour we bought some churros – their first time having some which started a conversation with the guy behind us. 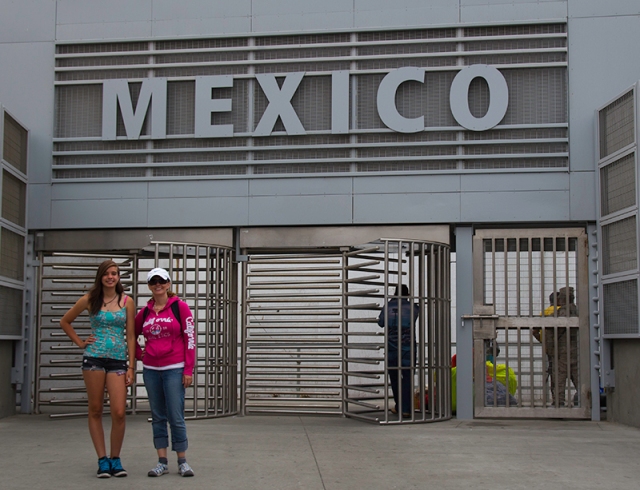 Nadia and Irena in front of Mexico border

He was smart enough to bring a book. Perhaps one of these visits I will remember to bring one too, but I’m always with someone (so I should bring something to read aloud). There was plenty of live music on this Sunday (the busiest line day) to keep us entertained at intervals. There was a boy on a piano accordion, a man singing, a man playing a harp, a woman singing and selling CDs, and a man singing while playing on a keyboard. 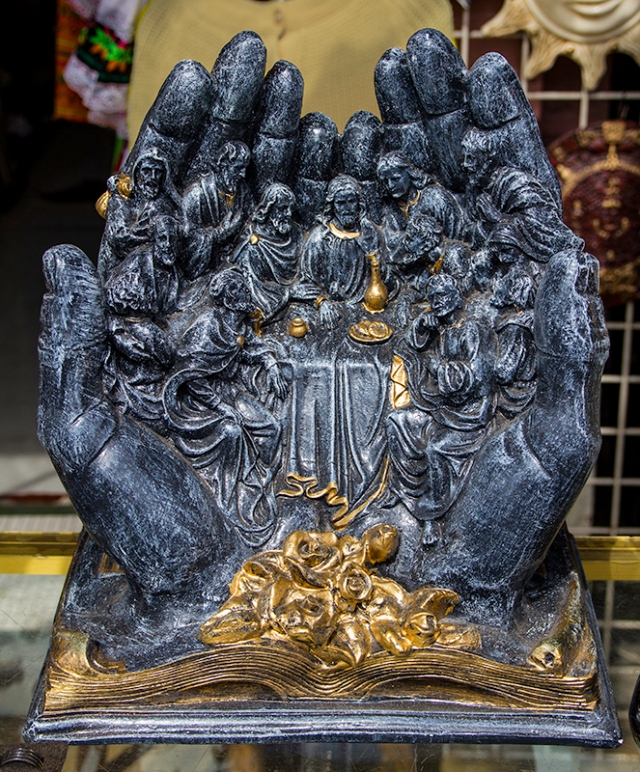 Jesus eating out of the palm of his hands

Today’s wait would only be three hours. We were all able to walk through the line. As I approached the customs agent he was telling one of his buddies something that included a phrase of cuss words. I laughed loudly and after swiping my passport, he waved me on. After a trip to the girl’s room we made our way to the pedestrian bridge in a slight sprinkle. I put my purse, camera inside, in a plastic bag for the trek back to the car. When we got home the rain was done.

I thought we might try something new for dinner, but Irena said it would make her day/visit if we could go back to Lucky Bastard Saloon for the same pizza and apple crisp that she fell in love with. I couldn’t argue with that. And this time she ordered two desserts so there would be some for her to take back to my house to eat later. Afterwards we went by the Little Saigon District to check out the Lantern Festival. 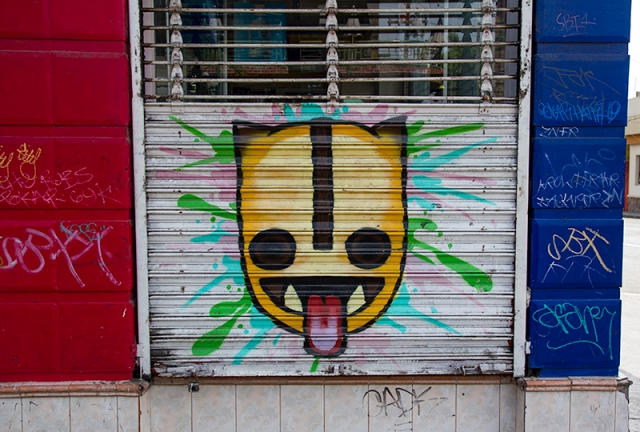 It was being held in the Hoover High School parking lot and was mostly children’s rides. We may have gone in to look more had it not been for the $5 entry fee each, so we walked the length of it instead. I found one or two rides that looked able to make the rider puke and a singer at the other end, but since we had just eaten there was no point in trying new food or losing our meal being tossed around in metal cages. 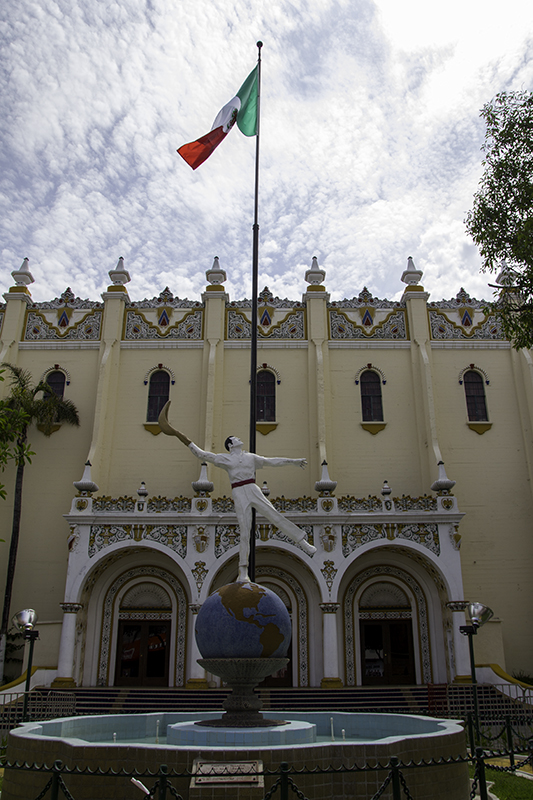 Jai Alai Fronton Palace with statue of the Pelotari in front

Later, Irena would feel like a movie, but after watching two trailers realized how tired she was and that she would likely fall asleep in the theater so we decided to stay home. She joked about her weariness considering she had a second coffee for the day while waiting in the Tijuana line. They leave before nine in the morning to drop off the rental car and get in line for airport security for their ride back to Colorado. 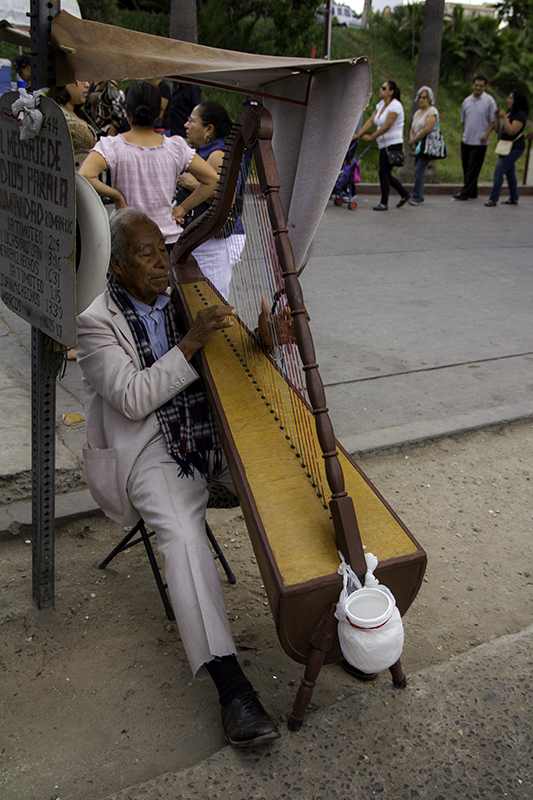 man playing harp while we wait in line