We, Betty and I, had Torrey Pines planned for the afternoon, but changed our minds and headed to the trails of the national park. It was a warm day with a cool breeze and we felt like we had the place to ourselves. We headed up to the lighthouse for the interior and exterior view – the home inside and the city across the bay on the outside. The skies were the clearest I’ve seen them. Betty was surprised to be able to see San Diego, Coronado, Silver Strand, Imperial Beach and Tijuana. 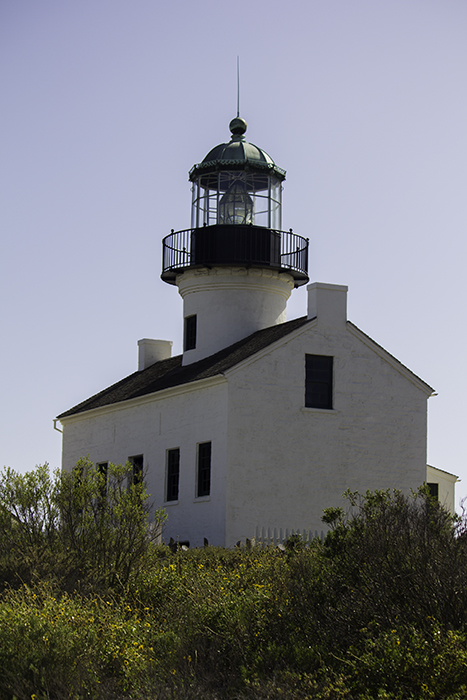 We visited the lighthouse kitchen garden that is growing vegetables that would have been available in 1873 – when the family relied on it for swiss chard, potatoes, artichokes, onions, tomatoes, and more; otherwise it was a ten-mile buggy ride to Old Town that would take all day. They also relied on manure and a cistern to help keep things growing in clay soil with limited water. 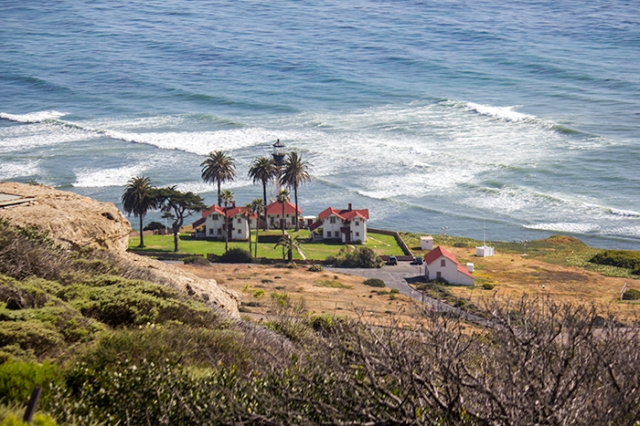 working lighthouse (the old one was blocked by fog)

We followed a trail out to the overlook – a great place for whale watching when it’s the season. Betty put some quarters into the scope in hopes of getting a better view, but was disappointed when all she got was a split second peek before the lens was dark again. I take a few more pictures of the city from this angle before we finally head to the limestone replica of Juan Cabrillo weighing in at 14,000 pounds and standing at 14 feet. Thanks to Presidents Wilson, Coolidge, Eisenhower, and Ford for helping preserve this tip of land with such history and expansive views.

We head down what looks like a road, but leads to a dirt trail (on the bay side) in hopes of getting closer to the water and the seal that we can hear. We see planes overhead, a sub with its entourage, squirrels and birds, budding pine cones, and the searchlight shelter that housed a 60-inch-diameter light used to illuminate ships in the harbor during the World Wars – and it’s unique that it was stored above ground and mounted on a track for easy positioning. 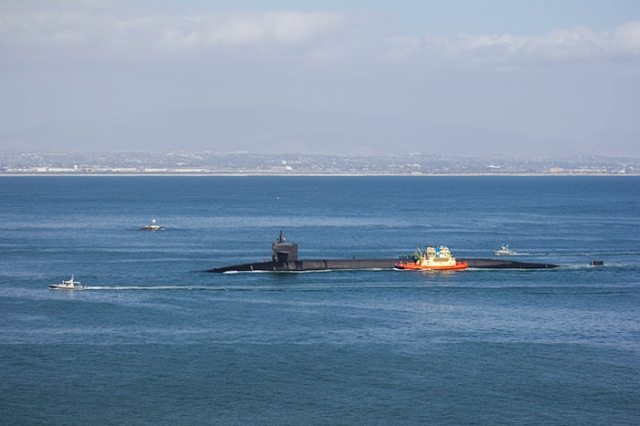 We see lots today, but feel we’ve only seen a piece of this tip of the peninsula. There is definitely plenty to come back for. On the ocean side there is another trail reached after driving down a different road that takes you along the ocean past cliffs, tide pools, and wildflowers full of hummingbirds. There are plenty of wooden posts with rope along the trail and logs on the trail to keep you from stomping on plants and animal homes.

a peek at San Diego